The No Fixed Address tour rocked Rogers Arena last night. The Vancouver based band Nickelback, along with their opening band The Pretty Reckless, blew the crowd away with energetic rock & roll.

Before Nickelback hit the stage, it was time for The Pretty Reckless to rock out. They opened with their hit song Follow Me Down while also playing some old classics such as Make Me Wanna Die. The American actress, musician and model known as Taylor Momsen delivered an incredible stage performance filled with excitement and liveliness. Needless to say, The Pretty Reckless rocked the Vancouver crowd in preparation for Nickelback to take the stage. Taylor Momsen of The Pretty Reckless

Nickelback opened up the night with one of their new songs, Million Miles An Hour, before playing some of the older fan favorites like Something In Your Mouth – this song included the first of many fire blast displays, Chad Kroeger’s Spider-Man hit song Hero, and the ballad Far Away, or as Kroeger stated this ballad as “something for the ladies.”

During the night, the bands friend, Brad, continuously brought shots up on stage. Each time they took a shot, Brad would write clever comments inside Kroeger’s cup such as “Vancouver girls are the hottest girls.” -Kroeger had indicated that his cup was like a “fortune cookie”-.

It’s Kroeger’s trademark party persona that dominated throughout the night. Kroeger even identified that he could tell he was “back in Vancouver because of the incredible weed aroma” that filled the arena. At one point in the night Kroeger threw a tray’s worth of beer-filled solo cups one after the other to the audience while some crew members launced T-shirts into the crowd. 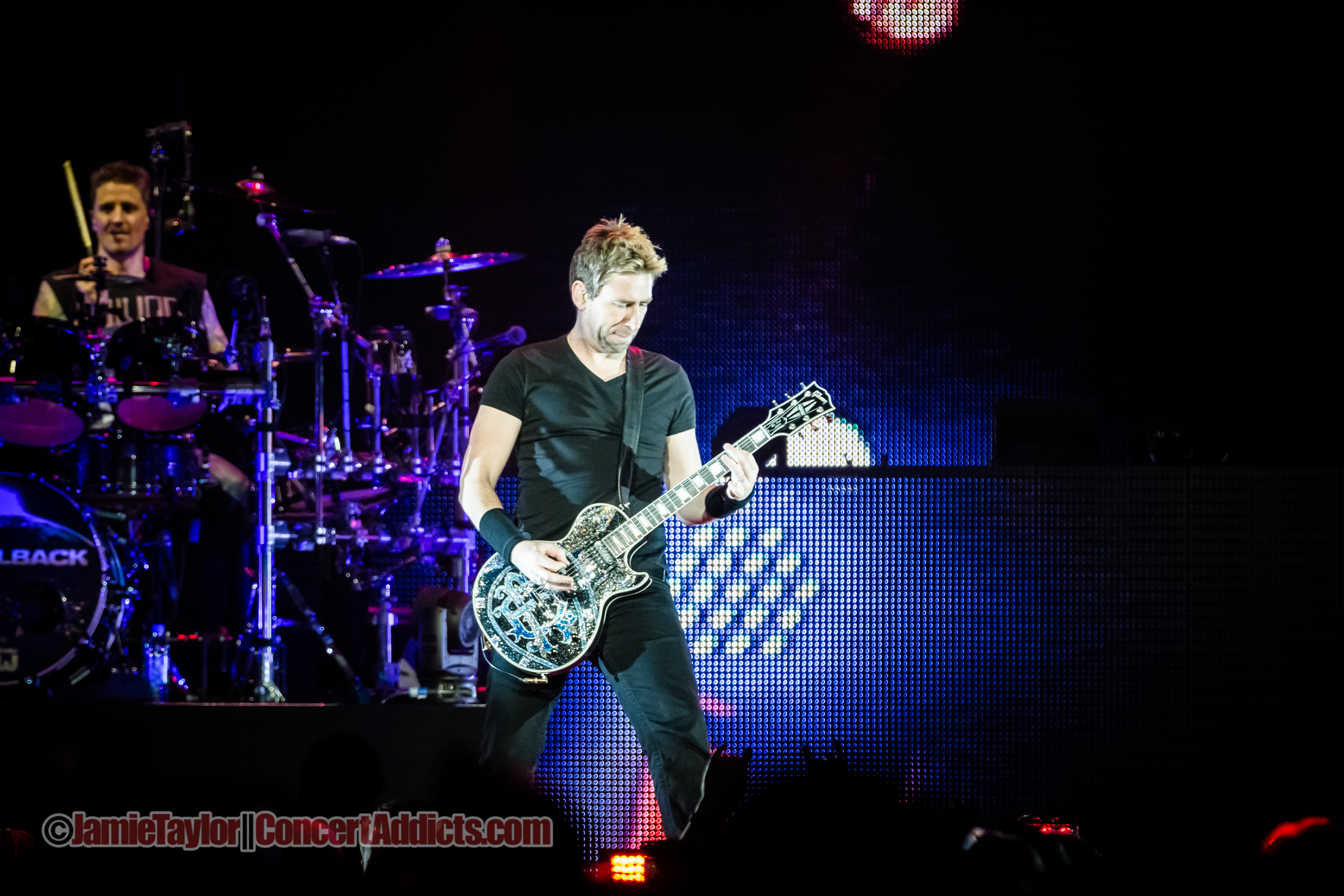 The stage itself was very impressive with an enormous arched video screen behind the group with two small catwalks on either side. The screen would flash live video footage as well as portrait clips from their music videos or footage of the crowd rocking along with the band.

During the night Nickelback’s lead guitar player Peake took over on lead vocals for The Eagles song Take It Easy and Bryan Adam’s hit Summer of ’69 while the crowd sang along. After Peake played the covers, Nickelback’s lead man Chad Kroeger took over the covers by playing Hotel California. These covers led into the band performing their hit Rockstar. Other new songs off the latest album No Fixed Address also made the set list such as Edge of A Revolution and She Keeps Me Up as the night progressed but their set included mostly older fan favorite material.

The main set ended with their hit songs When We Stand Together and How You Remind Me. After the band finished with these songs, they thanked Vancouver and headed off stage. The lights dimmed and the whole crowd was screaming, cheering and chanting Encore! The band came back on stage to play two more, and ended their encore with a loud, rock ‘n roll, fire blast performance of Burn It To The Ground. 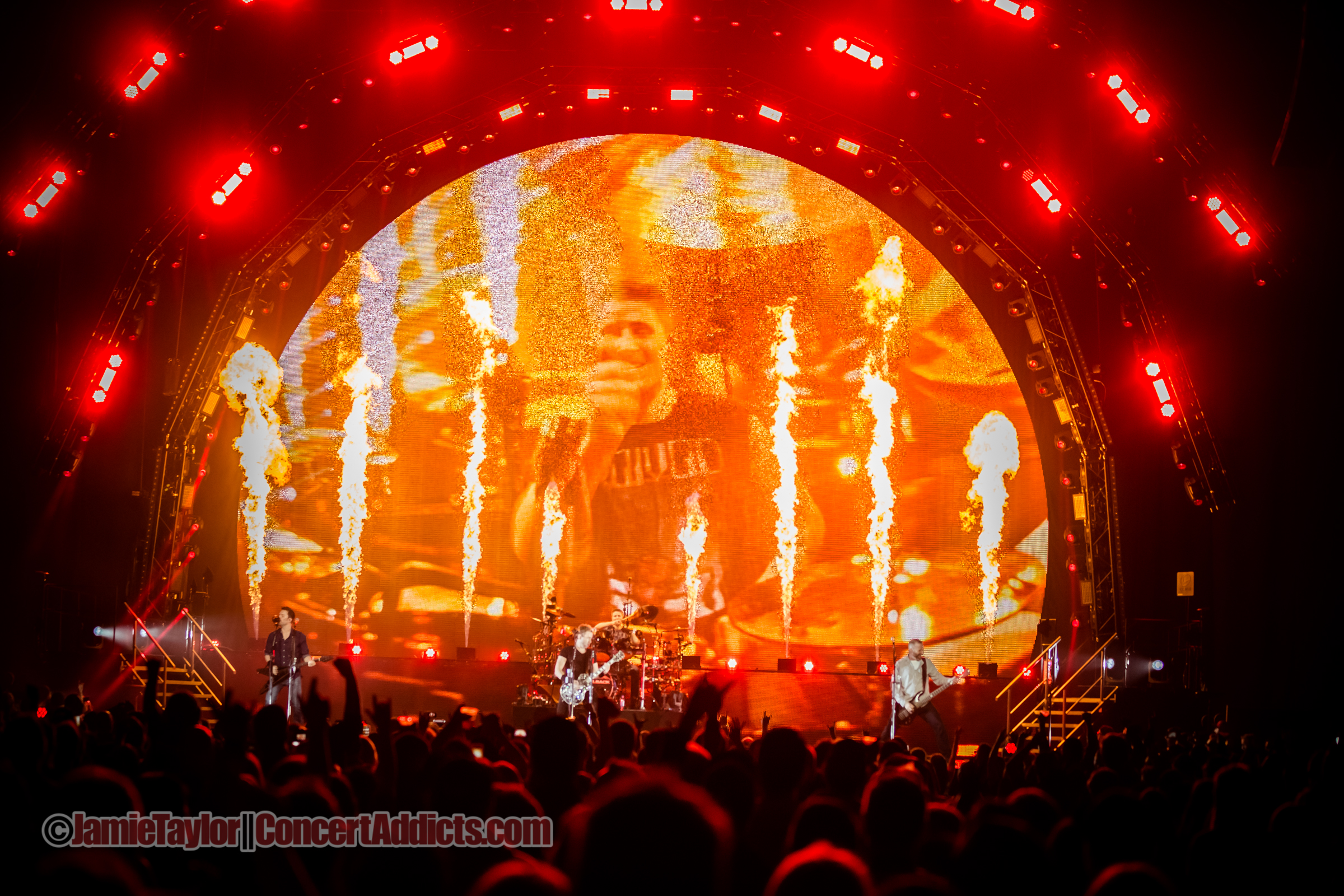 The No Fixed Address tour rocked Vancouver and the small town Alberta born band did not disappoint their fans. Whether you are a Nickelback fan or not, last nights show was absolutely incredible. Everyone left Rogers Arena in awe of that high-octane rock.