The world might end next Tuesday, at least according to the news and your social media feeds. Yet, regardless of who wins the election, I have a feeling there will plenty of pissed off people who will need an outlet. It’s during times like these that punk thrives. Take the late 80s – early 90s when bands such as Bad Religion, The Offspring, Pennywise and NOFX became hot commodities. Around the same time Mike Burkett, aka Fat Mike, founded Fat Wreck Chords, which along with Epitaph Records, became the soundtrack for many a disaffected teenager’s formative years. Fat Wreck Chords became a scene unto itself, releasing now-classic albums by Propagandhi, Strung Out, No Use for a Name, Against Me!, Anti-Flag, Descendents, Dillinger Four, Rise Against and Sick of it All. This tradition continues today, with the addition of bands such as The Flatliners, Direct Hit and PEARS.

Useless ID didn’t waste any time diving right into a raucous and energetic set. For those who are unfamiliar, they’ve been releasing consistently great punk rock albums for two decades. Hailing from Haifa, Israel, which is not exactly a worldwide hub of punk, Useless ID mix melodic hardcore with a healthy dose of politics. While Israel may not come to mind when you think of punk, maybe it’s time we all turn our ears to the middle east and listen. Useless ID is so much more than where they come from, they are stellar songwriters and captivating performers. They hit every note with precision and put on one hell of a show.

For those who read my review of PEARS when they came to Seattle in August, you know how much I love this band. Hailing from New Orleans, their sound has influences of Black Flag, The Descendents and a healthy dose of singer Zach Quinn being possessed. He loses himself, letting the music take over as he writhes around the stage, existing somewhere between man and beast.  There’s no point in resisting the intensity coming from the band and thankfully the audience succumbed, becoming a hurricane of bodies bouncing off each other. With everyone letting go of their everyday worries for 45 minutes of amazing, blistering punk rock.

Not only will PEARS revive your faith in the fact that punk isn’t dead. They’ll grab you by the throat and won’t let go until you submit. This kind of oppressive energy is what made punk so captivating to me as a teenager and to hear it alive and well should melt even the coldest punk’s heart.

Your Expectations are Meaningless 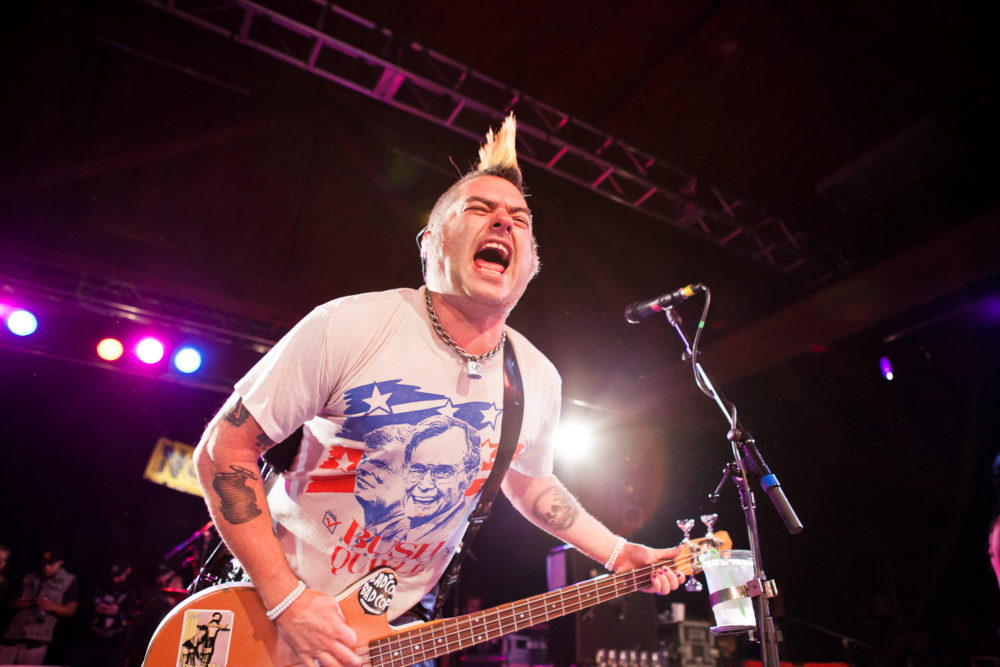 NOFX have gotten better with age! There I said it, I actually prefer newer NOFX and their recently released album First Ditch Effort is a perfect example of why. The songwriting has gotten stronger and the lyrics have a vulnerability and self-awareness that’s refreshing. I’m not trying to disparage the early years because there’s no denying the classic status and impact of Punk in Drublic. Rather it’s to posit the idea that NOFX has matured, which seems antithetical to their image and punk in general, but it’s true. While the songs about partying and drinking are still there, the perspective has changed. Instead of boasting about self-destruction, Fat Mike seems to be more concerned with learning from it.

I’ve seen NOFX so many times that I’ve grown accustomed to the slurred words and missed chords brought on by a healthy pre-set party regime. Yet, there was something different in the air as they took the stage and greeted the audience to the sound of ‘Time Warp’ from The Rocky Horror Picture Show, they were present and clear. Fat Mike pranced out on stage in his finest leather skirt and fishnet stockings. As the first chords of ‘Dinosaurs Will Die’ hit they were precise and Eric Melvin was airborne, running around like a four-year-old who just found out he’s going to Disneyland. While the crowd was already fully into the show, things went to eleven when the band went from ‘Fuck The Kids’ straight into ‘Linoleum’. From there it was a whirlwind of sing-alongs and circle pits aka a punk show.

Man Children Doing What They Do Best

There’s a common misconception that being into punk is just a phase and people will outgrow it. While this might be true for some, it isn’t true for NOFX or a large portion of their fans in attendance. A big part of staying mentally healthy is to not forget to feed your inner child and punk is the sustenance that allows many to keep their sanity. NOFX is one of the longest running bands who keep this torch lit and alive, never taking themselves too seriously. This allows El Hefe, Melvin, Fat Mike and Smelly to get up on stage every night and deliver a killer set of fast, loud music and provide their fans with a night away from the outside world.

One of the highlights of the evening came when NOFX played ‘I’m So Sorry Tony’ from the aforementioned First Ditch Effort. This is because it is a song where the evolution of the band is evident and its reflective nature is an emotional gut punch up there with ‘My Orphan Year’. But the thing that this song does better than that is it’s more positive and less nihilistic, with Fat Mike singing “Tony, you make me see myself in a way I don’t wanna see/Do I have to stop living so recklessly/So I can be the father I know I can be?”. This memorial track for the late, great Tony Sly of No Use for a Name shows a more mature direction for NOFX.

While it would be easy for a band with over thirty years of history to just recycle the same song, NOFX is pushing forward in a new and exciting direction.