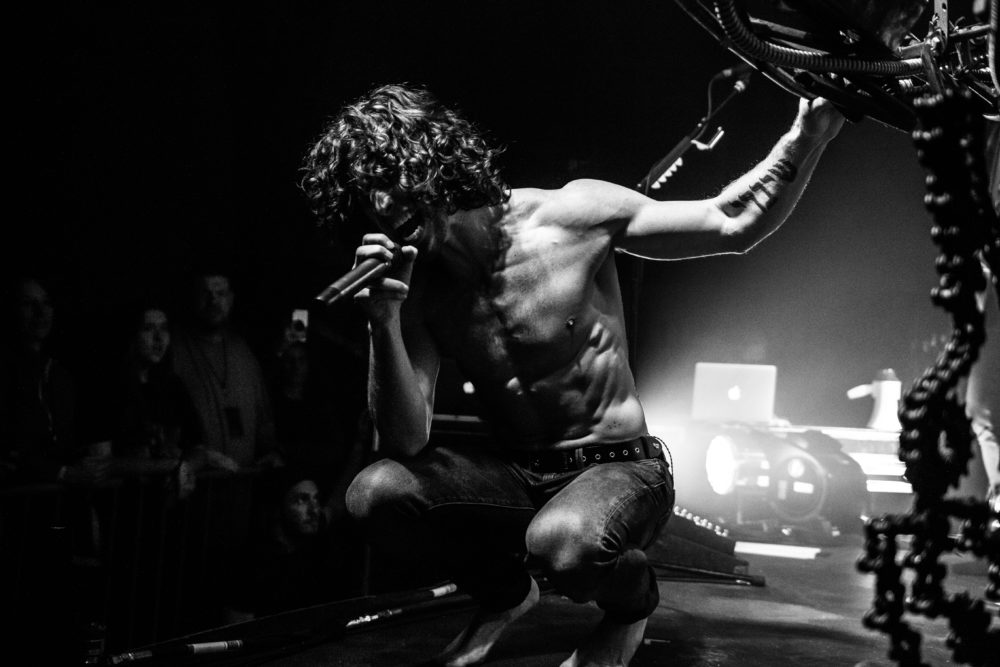 Fresh off of the release of their newest record, “The Stories We Tell Ourselves“,  San Antonio, TX four-piece Nothing More descended on Richmond, VA Monday night for just the second stop on the ensuing headlining tour. The band’s first major label record, after self-releasing a multitude of albums, soared in popularity and even earned the band a Grammy nomination.  In the face of newfound and well-deserved success after over a decade of existence, Nothing More has maintained their trademark aggression, authenticity and enthusiasm- and for that reason, I couldn’t wait to witness that energy live.

A sold-out crowd buzzed with anticipation, and I arrived at The Broadberry just as the lights went down for Big Story. As they only have a single out on Spotify, I was in the dark as to what to expect from them.  Big Story’s meandering instrumental feel coupled with soaring, high and smooth vocals gave an almost trancelike state to their set. While I hadn’t heard them previously, I’d be excited to see them at a couple of their booked festival dates this summer.

Next up on the bill was one of my current favourite bands, The Contortionist.  Beautifully blending dissonance, dark ambience, and odd time signatures, there’s a unique almost transcendental quality to their material.  I’d seen them twice before on wildly different bills, but not since the release of their newest release: Clairvoyant.  As the Contortionist continue to evolve their sound from aggressive to delicate and melancholy, their purely crushing writing style persists.  Their set began with Monochrome (Passive)- a sludgy yet dreamlike instrumental laden with polyrhythms.  As the sensory barrage lifted for a moment and the track ended, the band was in near complete darkness.  It didn’t last, though- the stage was quickly plunged back into light as a single note broke the lull and launched us into Godspeed.  The pure heaviness didn’t relent, and vocalist Michael Lessard’s sombre voice added another ominous layer to the Contortionist’s soundscape.  The ethereality of their set was heightened by erratic yet calculated strobes in perfect synchronization with the spastic background chugs.

The set honestly felt like a journey through the world of Clairvoyant, brought to a fitting conclusion with the final album track, Return to Earth.  The dissonant, echoing intro chords resonated hauntingly, weighing heavily on the silent crowd.  The bridge of this track especially moved me- a jarring, powerful, mournful change of pace accented by uncharacteristically upbeat keyboard line in the background.  The Contortionist closed with what, in my opinion, is their most versatile, progressive work in their discography: the two-part epic Language: Intuition & Conspire.  From a soothing, repetitive and reverie-inducing intro, to jarring riffs and harsh vocals that hearken back to the band’s early days, this was a perfect ending to an all-too-short foray into the pure, artful progressiveness of The Contortionist.  The fading of Language had a sort of finality of a headlining set- but the main event was yet to come.

Nothing More took the stage a short time later, and damn, did they hit the ground running.   Vocalist and percussionist Jonny Hawkins tore onto the stage with a vengeance, immediately jumping onto the auxiliary drum kit set up centre stage. The no-holds-barred aggression and passion were evident immediately as they opened with Christ Copyright. Nothing More tore the small 600-cap venue apart, utilizing an impressive light show and crowd interaction to whip the crowd into a frenzy.  They played several tracks off of their latest record but threw in older tunes such as Ballast (This is the Time) and even a raucous cover of Equinox by Skrillex.  The sixteen-song set had peaks and valleys- from the raw, in-your-face “Do You Really Want It” to the tender, soulful “Just Say When” and “Jenny”.  Before the final song dropped, Johnny took a moment to explain something integral to Nothing More’s live performance:

“Now, there are two reasons we don’t play encores: they’re fake, and they’re fake.  We leave it all out onstage, we don’t do it for show.  So give us all you got for this final song, because you won’t get another chance.”

All of the energy of the show came to a climax with their final track, Salem.  The “Burn the witch” chants, smoke, and artillery-style percussion drove the crowd into a frenzy, and as promised the band held nothing back. Flying hair, sweat, screams and the roar of the crowd built to a stunning conclusion, then nothing.  The lights went up, the background music began again, and the show was over at the drop of a dime.  Such an abrupt halt, but as promised, Nothing More left everything out on the stage.  They’re a band you need to experience to truly understand- and this tour has only just begun.  Don’t miss them when they come through your city- either on their first headlining leg or in support of Papa Roach in late March/April.  Dates can be found HERE.