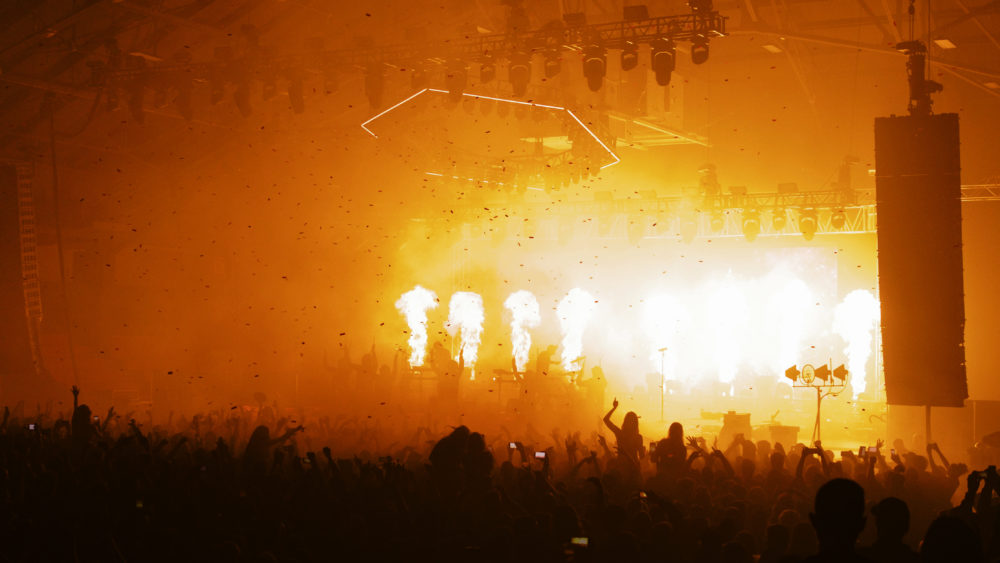 I burst into the PNE Forum right in time to catch Odesza’s opening sounds. The warm, lively insides of the stadium were a stark contrast to the cold outside, and it was like slipping into a magical hideout.

The first of their two sets in Vancouver, Odesza played to a sold-out crowd on November 3rd, 2017. Harrison Mills and Clayton Knight of Odesza have been experimenting with electronica since 2012, when the Seattle duo first formed. Their unique sound, best categorized as chillwave or electropop, is filled with nostalgic and blissful soundscapes.

To no one’s surprise and everyone’s avail, Odesza put on an amazing set that night. Their new album, A Moment Apart, sounded just as good live, if not better, with their enhanced sound and stage design. Their prismatic logo graced the ceiling above them, pulsing a variety of hues in time with their set. They played in a larger venue with a wider stage, compared to their last Vancouver performance at the Commodore in 2015. Overall, there were more lights, visuals, smoke, and pyrotechnics, and everything was perfectly harmonized to the dot.

They played a mix of old and new tracks, with a sprinkle of remixes. The pair greeted the crowd with “All We Need,” their track featuring Shy Girls. Mills and Knight played side by side on their midi drum sets and keyboards as they transitioned into “Show Me.” In a lovely haze of fuchsia, they performed “Say My Name” to the delighted all-ages crowd, some bundled up in winter layers, and others less clad in rave-ready outfits. Everyone happily belted out, “when you gonna let me know, if you give a damn about me?”

They played all their goodies from their latest album including, “Late Night,” “Boy,” “La Ciudad,” “Divide” featuring Kelsey Bulkin, “Line of Sight” featuring WYNNE and Mansionair, “Meridian,” and “Falls” featuring Sasha Sloan. Everyone was satisfied once they finally played “Higher Ground,” with live vocals from Naomi Wild herself. Purple rays playfully lit up the stage from all directions.

Every track was masterfully produced and performed, as well as dance-friendly and heart-warming. There were snippets of darker material, with a heavier beat, like their remix of Pretty Lights’ “One Day They’ll Know,” which dropped to real fire and bright orange lights, warming the stadium further.

The other champions of the night were the Odesza drumline, a team that consists of over ten instrumentalists. They marched onto the stage several times wielding drums or trumpets, wearing all black or all white. Playing in synchronicity, the pairs looked like intense body doubles.

After playing a slew of tracks from their newest album, they came full circle and played one of their older faves, “Sun Models,” featuring Madelyn Grant.

The show wasn’t over without an encore, and they played an epic one with full support from their personal drumline, illustrating the massive, team effort that is Odesza.

There wasn’t a single person who left that venue feeling disappointed.

Photos © Philip Moussavi
The requested photo source cannot be loaded at this time. Photoset not found