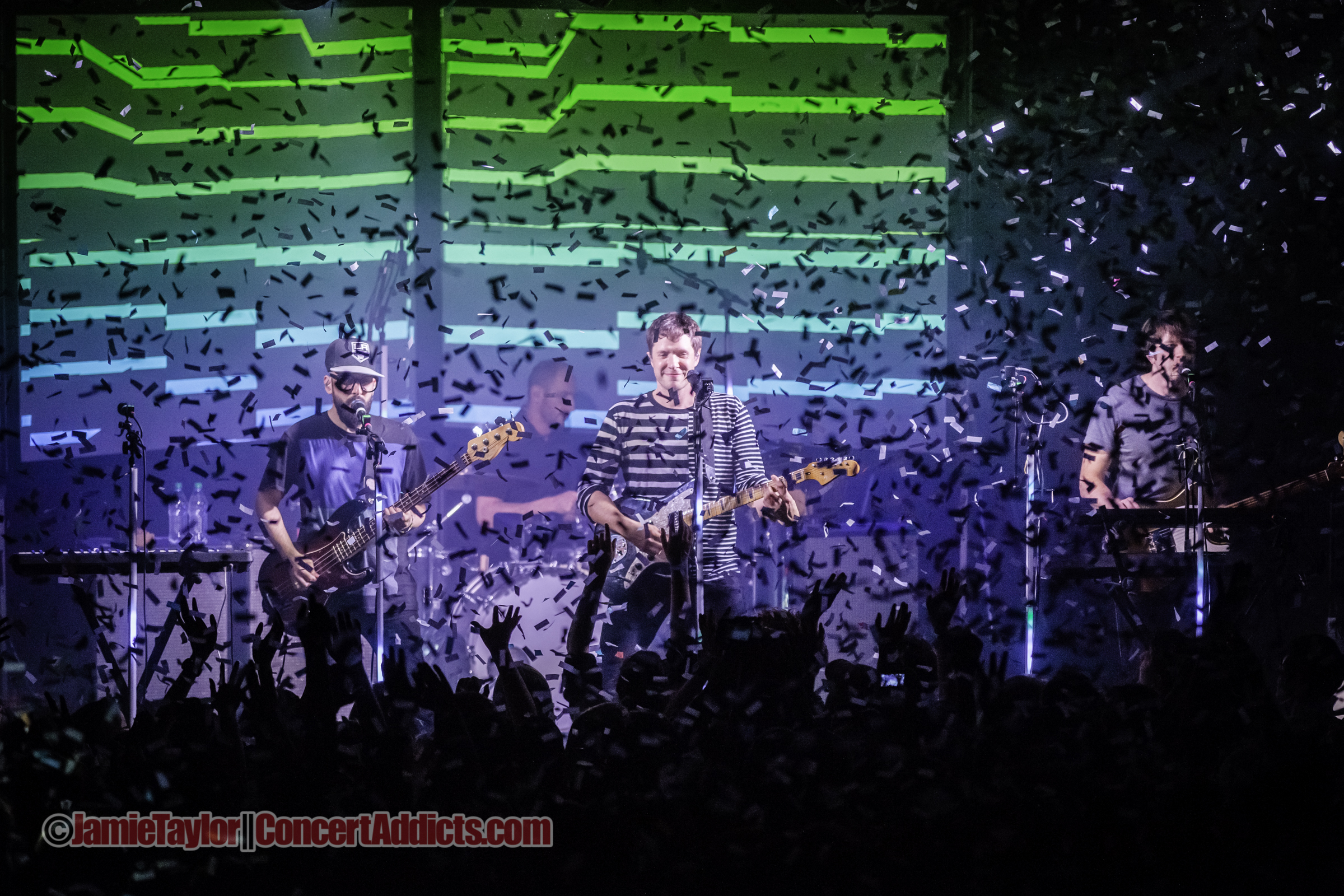 In summation, this show was a carnival of musical chaos. I last saw OK Go open a show in this very same room almost 10 years ago, a time before the first of their creative videos, arguably bringing them more fame than their music, had been made public. At that show, they were schilling a hand-burned EP of three songs, including “A Million Ways,” that they advertised by performing the same well-choreographed dance that makes up that song’s video. It made a fan out of me, and I was very curious to see where the last decade had taken them in a live atmosphere. How can they compete with those incredible videos? Will the music stand up without the visuals? Let’s find out.

Taking a spin around the Commodore Ballroom tonight before the show, I am already intrigued by the imposing towers of lighting equipment flanking the stage, as well as the scaffold at the back of the room holding up a giant projector. I was in early, expecting opening band White Arrows to hit the stage around 9pm, but time wore on and on, well past the average show start delay, and it became apparent we were not going to get an opening act that night. I had parked myself at the back corner of the massive sound and lighting booth, in order to get a clear view of what was sure to be a good-looking show, and during that long delay, head-to-toe-black-dressed and towing his girlfriend along by the hand, OK Go singer Damian Kulash quietly appeared, asked the lighting crew for directions to backstage, and slipped through the crowd with no one the wiser. I overheard one of the crew members mumble, “I’m glad he made it,’ whatever that means. All good, the show may go on! With the push of a button, a sheer sheet dropped across the front of the stage, offsetting the angled double-panel white screen sitting behind the drum kit. Our faithful sound and lighting crew starting flashing strobes and flicking their ultra-bright flashlights around the back of the audience while dancing about the booth. Everyone is on board! Shadowy figures began to appear behind the screens as OK Go took the stage and the thirsty audience began to holler for them. Suddenly, we were launched full-bore into the super crunchy opening track, “Upside Down and Inside Out.” It was an awesome choice for a set-leading track, with accompanying visuals of the chopped-headed band members (as in their latest album artwork) lip-syncing to the live song and flashing around the sheer dropsheet in front of the stage. It was colourful, well-presented, and above all, LOUD. It was way louder than I expected to hear from this group. I was floored, impressed, and maybe a little deaf for it. Three songs in, the sheer dropsheet fell to the floor and confetti cannons exploded over the audience for “The Writing’s On The Wall.” The visuals, now only projected on the panels behind drummer Dan Konopka, mimicked the mind-bending optical illusion video the band had created for this tune. The confetti continued to rain down on the crowd at every chorus. I can’t help but feel for the people who are going to be cleaning this up afterwards. For the most part, the band members themselves stayed relatively stationary through the set, with a few notable exceptions, letting the visuals really take centre stage. Kulash seemed to have a hefty amount of monitor problems, and sure, the occasional vocal squawk, off-key lilt, or plonking guitar happened, but they were mere whisps in the grand scheme of things, and frankly, with everything else going on onstage, and all the details the band likely was in charge of remembering to do to keep up with the visual work, they did a smashing job. Eventually, the contraption at the end of the microphone was confirmed to be a GoPro, and trained on Kulash’s face, became part of the visuals for a few songs, both in front of and behind the band. It’s a good trick we have seen others do, and I was solidly reminded of a typical Flaming Lips show, coming to the realization that OK Go is well-poised to be the successors to their long reign on the throne of live show chaos. About five songs in to the set, the band paused for a question-and-answer session. No really. The first question was about what happened to the openers, White Arrows. Kulash replied, “They got stopped at the border because they’re fucking outlaws. …I wouldn’t let them cross the threshold to another room, much less a whole other country.” Kulash entertainingly answered further questions about what kind of donut he would be (maple bacon coffee chocolate) and who made his shirt (Alexander Wang) before the music continued. Another distraction to keep us from seeing some kind of stage set up? Perhaps. Next up, “This Too Shall Pass,” the song with the Rube Goldberg machine video. Balloons now were bouncing around on the crowd’s fingers, frequently making it back to the stage to be bopped back out by the band. Near the end of the song, when the mellow refrain of “let it go this too shall pass” is sung repeatedly, Kulash deftly sunk onto the hands of the crowd with his microphone still in hand to let the audience take the singing reins for a moment. He was back to full vocals while still being passed around on the hands of the crowd before safely making it back to the stage. 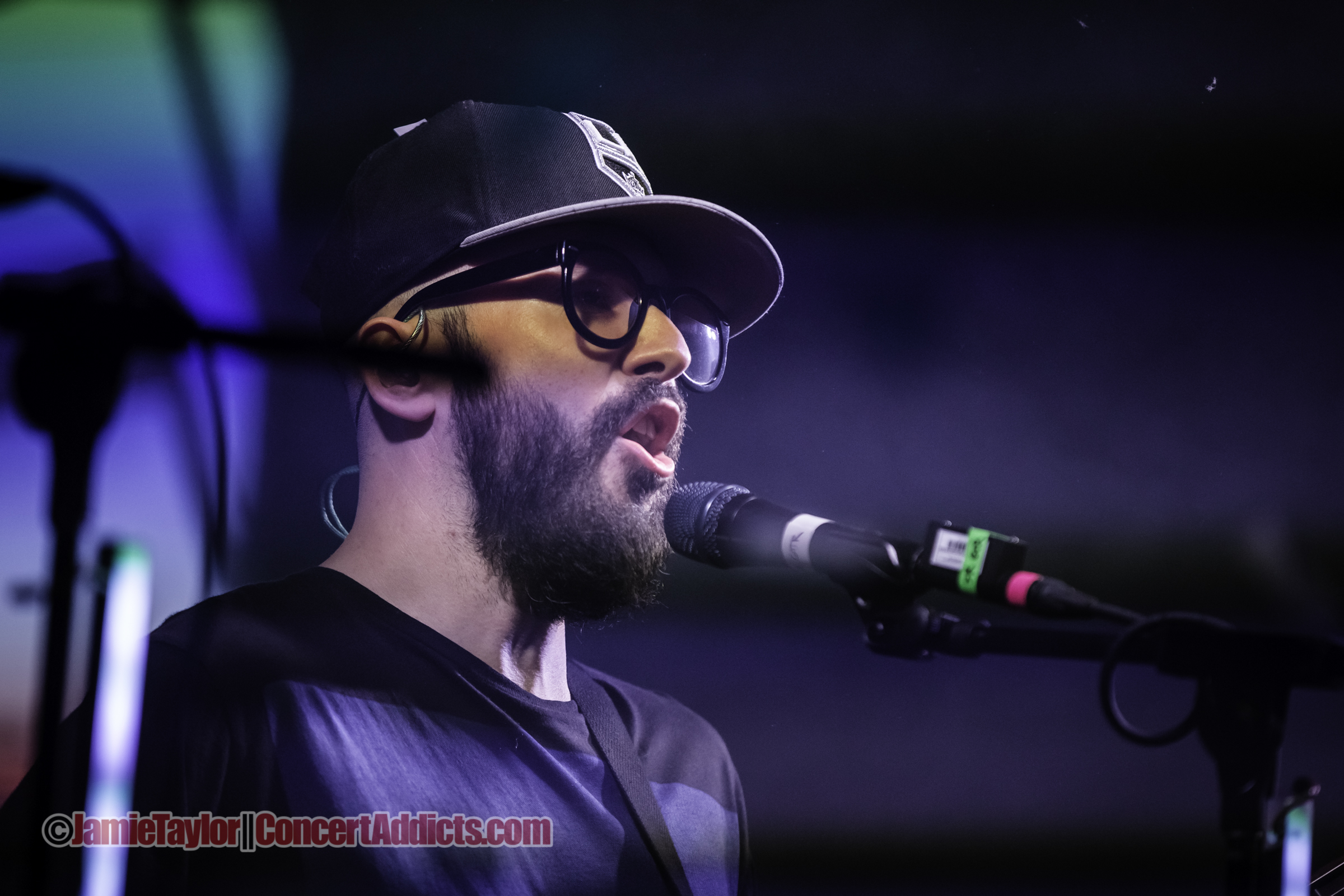 Another great audience-involvement trick included sampling the band stomping and clapping and hissing to make a virtual drumkit on an iPhone that Konopka then pulled into a loop on stage and worked into a performance of “There’s A Fire” that also included banjos and chimes and possibly old phones and toys of some kind – it wasn’t clear exactly what all the items being bleeped and booped into the microphones by the band members were from my far-off vantage point. Intermittently, bits of confetti still flitted down from the rafters. The balloons still bounded around the audience and the stage.

Following this, the band left Kulash alone on stage while he took iPhone photos of the crowd, proclaimed his addiction to Instagram, and then told us that he loves Canada and feels safe here and knows we won’t kick the shit out of him, before wading into the crowd with a guitar and then standing on a small pedestal in the middle of the room to sing “The Last Leaf,” making sure to turn through the song so he could face everyone in the room. Audience members were still bouncing the balloons around, and magically they seemed to be somehow confined to bouncing around only by Kulash during this song. Then bass player and Kulash’s ‘best friend of 27 years,’ Tim Nordwind took the stage to distract us with a magic trick (another dropsheet appeared on our command to obscure the stage) and another question-and-answer session while Kulash slipped through the crowd toward backstage. We learned his animal totem is a ram, and his plant totem is a cactus.

Once Kulash was back in place on stage, they rocked out “Needing/Getting”, and then cracked into the vault for “Get Over It,” which is the song that had originally hooked me on them a decade prior. Behind me, a guy was losing it, yelling “This guy’s amazing!!!” and howling every time Kulash let loose with a huge, grainy roar of a vocal. Those pipes are incredible – and again I implore, the band is so much louder live now than I would have expected, certainly than they were ten years ago, and that yell is mind-blowing. One more question-and-answer session covered the topics of birthdays, the end of an empire and dancing before we die. The band then took us through the amazing contrast of the mellow song “Skyscrapers” followed by a red-lit, REALLY LOUD cover of Led Zeppelin’s “Black Dog.” Totally unexpected, and suddenly this was an entirely different breed of balls-out rock show. These guys don’t really look the part, but man they pulled it off. They ended the main set with “Turn Up The Radio” and a simple “Thank you Vancouver” tossed our way as the band left the stage. Now another dropsheet was across the stagefront and a flashy montage of all their videos started playing on the sheet to distract us from whatever was happening behind it. Shortly, the sheet fell away and the band was on stage again in white jumpsuits, and that familiar square formation to perform once again the dance sequence from “A Million Ways”, including Norwind lip-synching to the tune. It was a heavily single- laden encore as they jumped back on their instruments and followed that with “White Knuckles.” No dogs roamed the stage, but it was bathed in blacklight, revealing psychedelic coloured patterns on their jumpsuits. Bubble blowers sprung into action, and blacklight-responsive confetti rocketed from the canons at the sides of the stage. “I Won’t Let You Down” followed, including some impromptu umbrella theatrics by a couple of clever crowd members, in homage to their ambitious video featuring literally thousands of Japanese girls doing choreographed umbrella dances. “Here It Goes Again,” one more blast of confetti and an invitation by Kulash for people to come up and dance on the stage closed out the show in style. The lucky 30 or so fans got up onto the stage and boogied to the waning notes of the tune, although one girl got her spiralled hair too close to Kulash’s guitar headstock and ended up getting completely tangled in its strings. It took a couple of crew members to get her unstuck while she snapped iPhone photos of the whole event as she held his guitar aloft and Kulash busied himself with saying goodnight one final time to Vancouver. 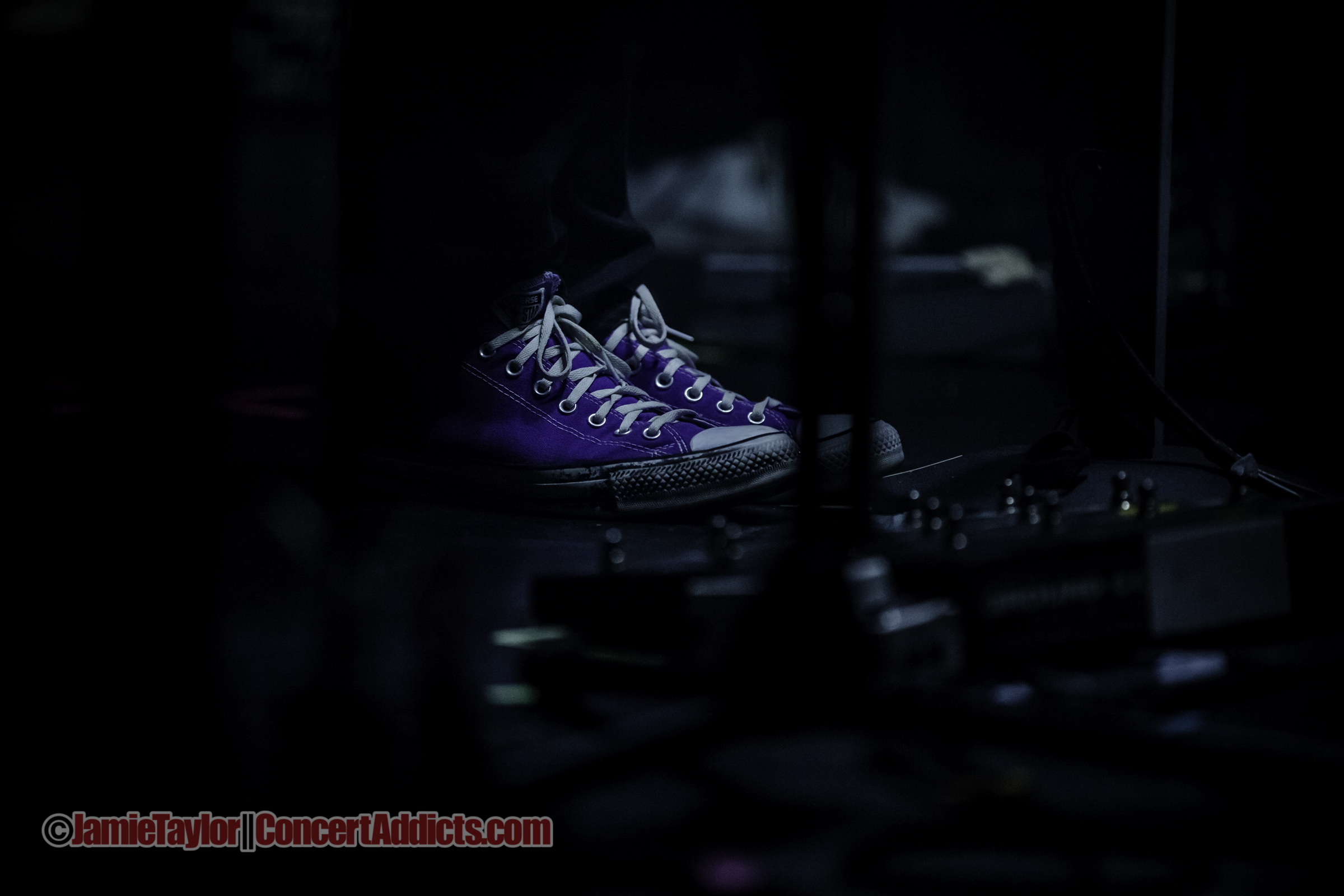 This band has clearly had a whale of a time over the last decade since they caught peoples’ attention with their creativity. They have grown musically quite a lot as well, but their energetic and thoughtful live show and engaging videos have really set them apart from being just some standard pop-infused rock group. The show is worth a look for sure – even if you don’t love the music, you will love the spectacle. As I wandered out of the room, Commodore staff were already attempting to sweep up the snowdrifts of confetti piled on the floor in vain as straggling fans grabbed handfuls and tossed them in the air. What a fun time.