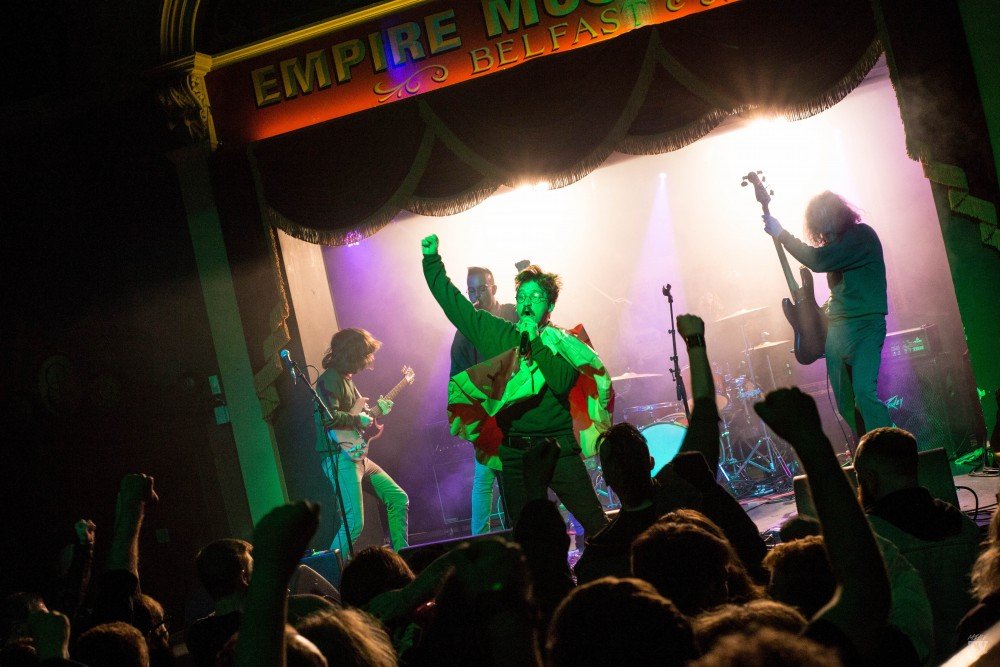 ‘Well hi diddly ho Belfast! Thanks for coming out neighborinos!’ Such were the chipper utterings skipping from on stage at the Empire Music Hall on this, the final night of the tour for metal phenomenon Okilly Dokilly. Well, that and unholy screams of rage set to thrasher music!

When I first heard that this band was coming to town, and indeed first learned of their existence, I was left puzzling the hows and whys of such an act’s conception. At first it seemed like an arbitrary obsession, but in fact, this band’s theme falls very much in line with the history of the metal genre. Metal bands have long found fascination in and have taken inspiration from religious figures and icons, only to bend them to their anti-Christian ends. The religious figure this time is none other than a certain loveable yellow family’s saintly next-door neighbor, Ned Flanders.

While I do like this theory, the origin of this unlikely pairing is more likely that the frontman has metal in his soul, but looked more like the clean-cut cartoon character than a vessel for the prince of darkness, so this uber-fan just decided to go with it. No matter how the real story goes, Okilly Dokilly are certainly doing something different in the scene, touting themselves as the only “Nedal” band going and identifying themselves strictly by the aliases Head Ned, Shred Ned, Zed Ned, Dread Ned, et cetera. But the big question on my mind leading up to show was this: Is it all just a gimmick or does the band have the talent and showmanship to back it up?

Well, the guys started dipping out onto the stage to set up wearing bright yellow hazard suits and face masks, with glow sticks taped to their backs, looking like nuclear power plant drones. Nothing gimmicky about that…But on second thought, it was actually pretty funny, and a clever way of allowing the band to ready their gear without blowing the payload of their entrance, and hinting at the awesome hilarity to come.

True to form the guys hit the stage dressed eerily identical in their Flanders best: green sweater on top of a pink collared shirt (which a couple of fans in the front row were also rocking, to their credit). Kicking things off with the haunting lull of “They Warned Me”, which quickly broke down into earsplitting havoc.

The band’s live sound is super tight and larger than life. With the power of unison and the strong synchronization of drum, bass, and guitar, the venue rang with sheer power. In all the heavy riffing, playful scrolling synth melodies added enough animation to hold interest, lending an 8-bit sort of vibe that didn’t come across as strongly on the album. The songs were firing out short and sweet, keeping the audience on their toes.

Head Ned (the one doing the wailing) unfailingly followed up each tune with a perky refrain of ‘Thanks neighborinos!’ in a hilarious juxtaposition to the screeching, croaking and shredding that preceded it. His transitional diatribes were the hands-down highlight, as he stayed in character and introduced each song with a gut-splitting, well-rehearsed routine. Probably the funniest was his lengthy soap-box speech about the trials of being left-handed, during which he somehow managed to convince everyone in the room that they too were lefties, using all the menacing-yet-ever-friendly persuasion of a bible camp cult leader.

‘This next song is extra brutalino!’ he would announce cheerily, and launch into the savage tracks like “Flanderdoodles” and “More Animal Than Flan”. Channeling a church-goer having a breakdown, Head Ned’s eyes would widen as he thrust his body about the stage with his fellow Neds, yet he could reel it in enough with the vocal chops to pull off the songs more hymnal elements. Alongside Zed Ned on keys, the analog bandmates, looking more like Mormon missionaries that metal gods, cast their fingers to the crowd shouting, ‘I don’t even know you but I’m sure that you’re a jerk!’

If you scan the set list and manage to catch all the Flanderful references made, then I want you on my team next time Simpsons Trivia rolls through town! Seriously, hit me up! After the gig I willfully threw myself into a pit of Youtube clips trying to trace the origins of these quirky little ditties, punctuating each viewing with a chorus of, “Ohhhhh, I remember that one!” God, the hours upon hours of research the band must have done in devising their songs must be immense…30 seasons worth in fact!

And sure, the connection between the references and lyrical offerings of each simplistic tune was tenuous at best, but that didn’t really matter. And even if the set list didn’t display any sign of musical range or songwriting structure, that really isn’t what it was all about. The crowd was going nuts for every punchy, quotable track regardless. And boy was it fun to watch!

For example, I have never seen an audience fluctuate so readily between mosh pit and arm-locking, partner-swingin’ ho down as they did in the space of a single song, “Panic Room”, which borrows Ned’s rewrite of “She’ll Be Coming ‘Round the Mountain” from one of countless episodes. Or how about watching a frenzied audience bump, chuck, punch, kick, smash, and ultimately destroy two large inflatable donuts during closing song “Donut Hell” as the Neds egged them on and finally adorned themselves with the shriveled remains?

But as all good Neds know, the night wouldn’t have been complete without a nice “White Wine Spritzer”, so of course the mustachioed men reclaimed the stage for an encore. The climax saw a costume change for Head Ned and he bared all for the full effect of “Nothing At All”, revealing a skin-tight ski suit under his drab clothes.

Okilly Dokilly was the most fun you could ever hope to have at a heavy metal show and, if not sparking a love affair with the genre, certainly rekindled my old flame for the classic cartoon. The Flanderphelia fueling this band is a gimmick to the max, but the guys pulled it off so gosh darn diddly doodly well that I can’t fault them in the slightest. Here’s hoping the group can find enough source material for a sequel to Howdilly Doodilly so we can catch them again on their next tour!

=Encore=
White Wine Spritzer
Nothing At All