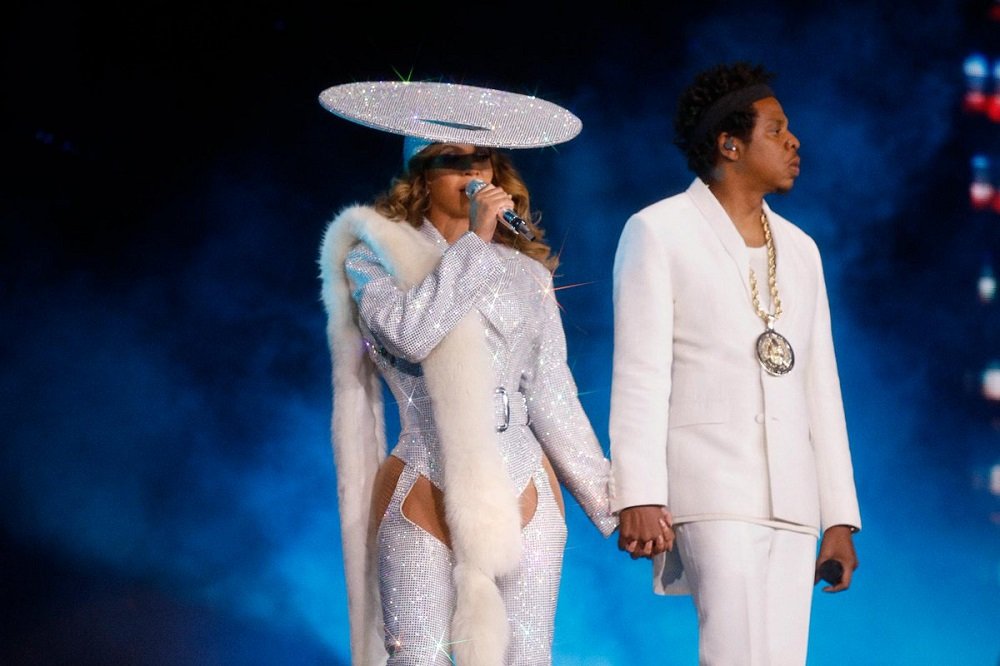 Music royalty, The Carters – aka JAY-Z and Beyoncé, bought their “On The Run II” tour to BC Place stadium in Vancouver last night, and it was everything that it was meant to be and maybe even a little more.

The night started off at half past eight when American contemporary R&B sister duo Chloe X Halle took over a small corner of the majestic hundred-plus-foot-wide stage. The two young performers were beaming as they delivered a bouncy, lively set that showcased their catchy sounds and heartfelt lyrics. Their backdrop was the platforms monolithic screen system, spanning the complete width the stage and standing more than fifty feet tall. It featured a simple triptych design, with the outer divisions running feeds for Chloe Bailey and Halle Bailey, respectively, surrounded in white and the center portion displaying their group name in black lettering on white. It was bold and beautiful, and a sign of the visual design artistry to be showcased throughout the evening.

Chloe X Halle set was met with the undivided attention of an eager crowd, for the most part. Their presentation was well received, and they soon departed the stage leaving it warmed up and ready for the main attraction.

There was quite a lull between opener and headliner but that just meant more time to grab some tour merchandise and refill beverages.

The lights were soon swallowed by darkness and the deafening screams of thousands of fans filled the air.

Giant white lettering flashed on the screen one word at a time – This Is Real Life – followed by the name of the tour – On the Run II.

An intricately orchestrated video, entitled “The Gangster and The Queen”, played for the audience. It depicted The Carters in an ambiguously tropical and impoverished, possibly South American, city. The cinematography was captivating and the story was one of power, lust, community, appreciating simplicity, and love.

As it wrapped up, the gargantuan display began to move and soon parted down the middle.

An equally tall Hollywood-Squares-styled grid illuminated at the opening and from forty feet up, two figures stepped into the light. They walked forward on to a platform and were slowly lowered to the main podium below.

After a few tension-building moments, the legendary twosome stood front and center.

The emphatic pulsing beat of JAY-Z’s “Holy Grail” from his 2013 compilation Magna Carta kicked off their set. Queen Bey started in with the intro, previously done by Justin Timberlake in the recorded version – “One day you screamin’ you love me loud\The next day you’re so cold\One day you’re here, one day you’re there, one day you care”. Her voice resonated through the venue and forty thousand fans lost their collective minds.

The duo was intense from the word go, they told a tertiary story with their set.

This first song showcased their admiration of one another as they stood together at the center of this stadium singing and rapping while staring at each other with love in their eyes.

“Part II (On the Run)” from the same album carried through next, and the performers strode apart. Each one working their way down individual catwalks running perpendicular off the main stage, allowing them to venture out into the throng of passionate fans.

The bombastic bass of the tours audio system pulsed each beat through the air in your chest, it was nearly impossible not to get swept away and feel your toes or hips or head bumping in time.

That epic video wall behind the musicians added ambiance and visual accoutrements to every moment but it was not the only accompanying touch, it was tied to choreographed dance and movement, as well as a catwalk light show, fire bursts from the wall itself, fireworks, dancers, a band, I mean it was just stunning. The level of organization it must have taken to put this together was awe-inspiring. It was never something that looked cheap or cheesy, it was tasteful and took a great deal of artistic license that was all paying off.

The set stormed on and evolved into a mashup of songs from both artist repertoires. Bey’s “Diva”, from her 2008 release I Am… Sasha Fierce featured a fierceness and attitude that fit so well against the bouncing aggression in JAY-Z’s “Clique”.

During the performance the artists would take turns exiting the stage, leaving the other to hold the reigns on their own. This allowed for a constant stream of wardrobe changes, another piece of the well planned and properly orchestrated display.

From JAY-Z’s end, he was explosive in his delivery, humble in speaking, and looked genuinely content to be on stage. The big songs were all there for the diehards; “Big Pimpin'”, “99 Problems”, “The Story of O.J.”, and “4:44”.

From Beyoncé’s end, she looked majestic, her voice was unwavering, and she carried the biggest portion of the show on her shoulders. Her big songs were all there as well; “Run the World (Girls)”, “Baby Boy”, “Resentment”, and “Crazy In Love”.

The last trick up the sleeve of the show was revealed when a portion of the main stage started to rise into the air. It climbed about twenty feet and then it started to move. The smaller stage rolled down the dual catwalk out into the middle of the stadium. It was a surreal moment that was par for the course when mixed in with everything else that was going on, but it is a feat that shouldn’t go unmentioned. It was the proverbial cherry on top.

The energy level had continued to climb through the night and it culminated on the last song.

The mini-stage rolled out once again and the legendary couple performed a raucous rendition of “Ape Shit”, the most noteworthy track from The Carter’s 2018 album EVERYTHING IS LOVE.

And that was it, the two and a half hour set was over.

They took a few moments to thank their team and the attendees and said their goodbyes, all while credits to the film scrolled down the screen behind them.

The satiated crowd filtered out of the building into the crisp autumn air.

The joyous mob singing the praises of what was one of the most stupendous performances this city has seen in a while.

Beyoncé and JAY-Z aren’t just setting the bar, they are building a whole new game.

Thank you to the musicians and their team for a wonderful evening.