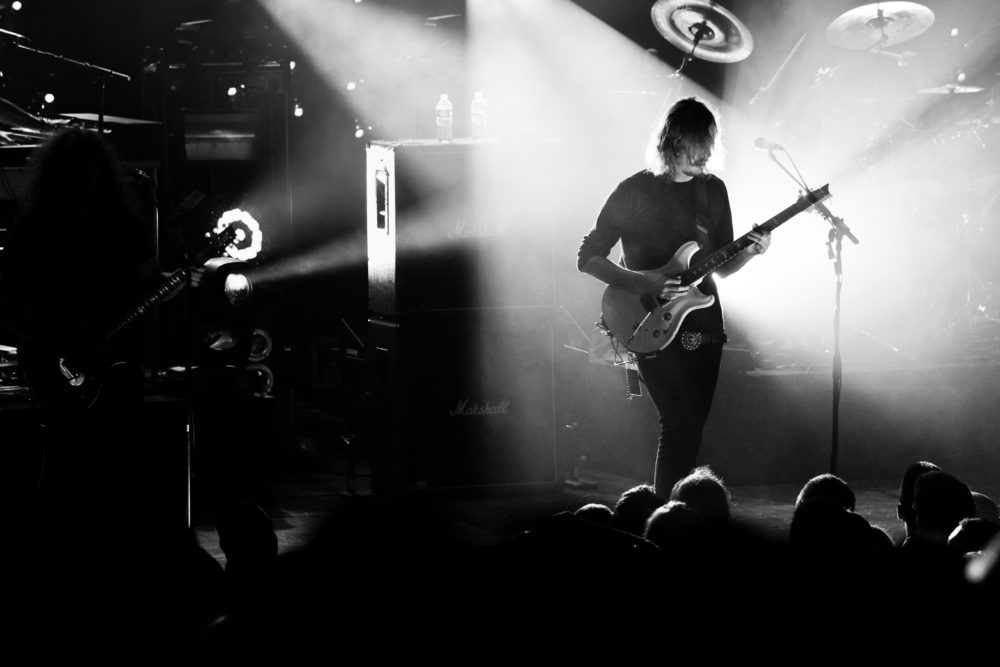 The Unholy Trinity is Complete

I’ve been photographing and reviewing shows on this site for over three years and it all started on an April evening in 2012. I wasn’t shooting a show, but just attending the Heritage Hunter Tour, which consisted of Mastodon, Ghost and Opeth. It was at this concert that inspired me to become a concert photographer. I’d been to countless concerts and was already photographing weddings. That night I gave myself the goal of photographing all three of the bands, or what I dubbed my Unholy Trinity. My quest ended this Tuesday when Opeth came through Seattle with The Sword.

The Hues of the Sunset

The Sword is a fantastic stoner metal band from the amazing and weird city of Austin, TX. They are more concerned with providing a soundtrack for whatever mystical journey you plan to go on, than they are with planning an intricate live show. This is a good thing because the music stands on its own and will captivate the audience with its grooves alone. This is what makes The Sword feel like they arrived on the scene out of step, forgoing the current trends in favor of solid songwriting and that perfect tone. And they’ve succeeded in separating themselves and carving their own unique niche in the modern musical landscape. Whether they are playing a headlining set or supporting a bigger band, The Sword puts on a great live show and Tuesday was no exception.

While The Sword have stayed true to their path, Opeth blazed multiple paths leaving their more stubborn fans confused and incapable of keeping up. Trying to pin one genre to Opeth is like trying to pin a tail on four donkeys at once. They started out as a death/black metal band, began to feel restless with the limitations of growling every lyric and decided to progress away from the guttural. Yet somehow when all of their songs are sewn together into a set list it flows into each other beautifully.

They started off with the title track from their most recent album Sorceress. Building the tension until they went from hauntingly heavy to hitting the crowd over the head with the sledge hammer that is ‘Ghost of Perdition’. When Mikael Åkerfeldt let out a guttural growl the crowed cheered, relieved that Opeth still plays the music that got so many into them. And play it they did, covering material from Blackwater Park, Deliverance and Damnation. At this point it felt less like the band who is trying to forget their past and more that they are intent of forging forward. Allowing them to weave a tapestry with multiple textures instead of just one.

When you think of Opeth comedy probably doesn’t come to mind, but Åkerfeldt has a dry sense of humor. Dispensing wry comments throughout the set that rivals the between song banter of Flight of the Conchords. After ‘Heir Apparent’ he revealed that he messed the lyrics up, but that’s one of the good things about guttural singing is that no one noticed. Aside from this admission of fault the set sounded impeccable and even better than the recordings at times.

Overall the night was a huge success, The Sword got things started off on a mellow and engaging note. Setting up the crowd to be punished and lifted up by Opeth. While this was the second to last night of this leg, I’m sure that we’ll see them grace North America with a new and tour in 2017. At least I hope they will because they’re amazing live and if you haven’t do yourself a favor and just go next time.