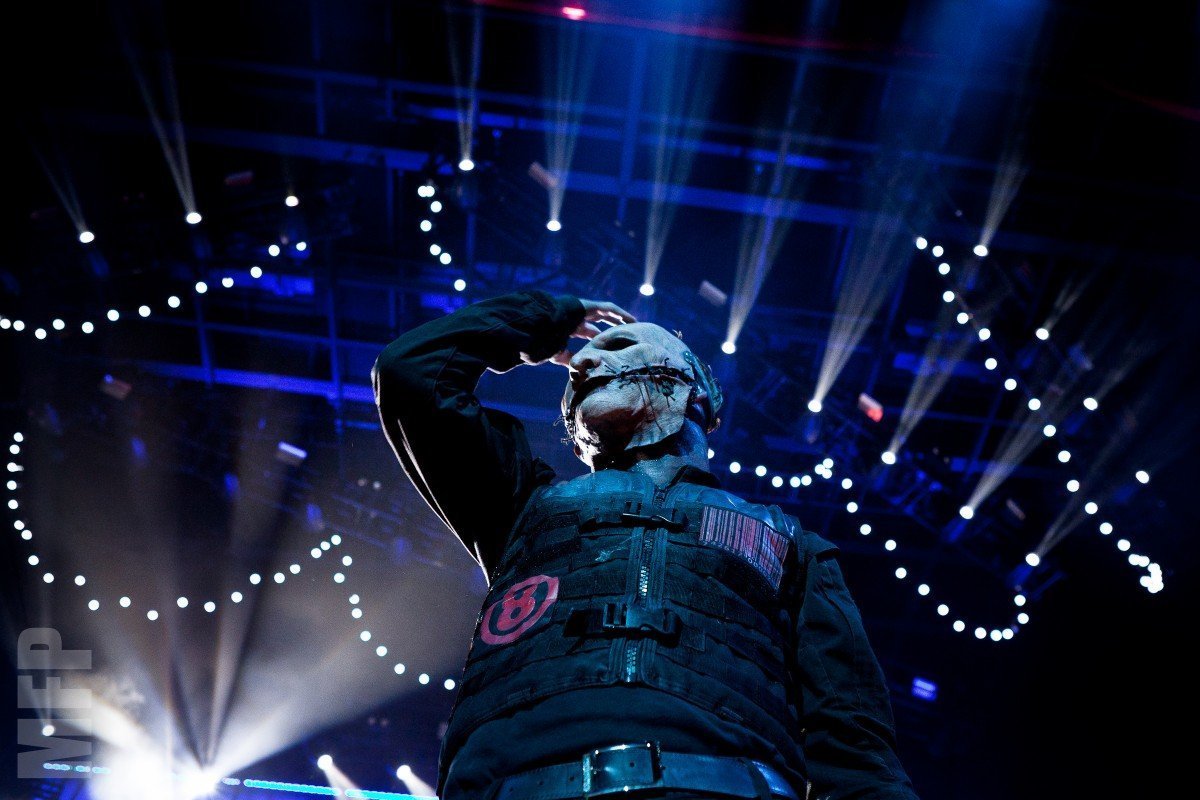 It’s that time of the year again, summer’s coming to a close and in Seattle that means the metal heads and hard rock fans head southeast to Enumclaw, WA for The Rock of Seattle 99.9 KISW’s annual festival Pain in the Grass. This year’s festival was the first to reach capacity, which should’ve been expected when the headliners are the one two combination of the juggernaut Slipknot and almighty Lamb of God. After a disappointing turn out for the Mayhem Festival in June, some were skeptical that Seattle still likes metal, but Sunday’s long day of screaming, screeching guitars and double bass drumming can lay that rumor in the shallow grave off to the side of HWY 164 it belongs in.

Due to the usual traffic issues, I missed Ayron Jones and the Way as well as Crobot, but I was in time to see Varsity Week get the crowd moving on the Another Century stage with their take on dance rock. Up next on the side stage were Like a Storm from New Zealand, who win the award for best use of a didgeridoo. Front man Chris Brooks has an undeniable charisma and ability to get the crowd into his music. Stitched Up Heart from Hollywood, continued to bring the high energy with their combination of rock, metal and hardcore. Lead vocalist Mixi has the ability to lull you in with her melodic voice and small frame, yet will lay you out with her scream. This band is high energy and worth seeing. Awaken the Empire kept the crowd dancing with their sci-fi fantasy themed hard rock. New Years Day from Anaheim, CA drew the largest crowd on the second stage of the day and the crowd was into them. It seemed like some of the fans up front were their solely for this band, singing along to every word.

Over on the main stage the ghouls in Motionless in White were getting the crowd moving with their horror metal. Backed by a banner which had the band’s name over the iconic pumpkin knife hand logo of the slasher classic Halloween, the band did not disappoint. They achieved a theatrical show without more than a few props and makeup. Singer Chris Motionless stalked the stage like a vampire, while bassist Devin Sola inhabited his take on The Jackal from the movie Thir13en Ghosts, head cage and all.

Vancouver’s own Theory of a Deadman were the only repeat from last year’s Pain in the Grass and the crowd loves them. Singer Tyler Connolly paced the stage when he wasn’t playing guitar at his mic stand fashioned from a shotgun. These hard rock veterans have found their fan base and they know how to make them happy.

How Bullet for My Valentine aren’t bigger is beyond me. They put on one hell of a show, their songs are heavy and as fast as anything in metal, yet their songs retain an anthem quality that doesn’t cross into cheesy. Drummer Michael Thomas kept the songs in beat with his flawless drumming. Front man Matt Tuck ran around the stage like he was doing it for the exercise and just happened to bring his guitar and mic along, just in case. Go see this band, you will not be disappointed.

Three Days Grace took the stage and got the crowd moving, new vocalist Matt Walsh ran around on stage like a mad man, working for every ounce the audience would give. His efforts were paid in full when the band played “I Hate Everything About You”, which was the loudest sing along at this point in the day.

Lamb of God is a powerhouse, it’s that simple. Their songs are crushing, unrelenting and amazing. The band’s power translates really well live. Singer Randy Blythe runs around the stage like his demons are chasing him and they occasionally catch up and possess him. The break neck pace of the songs are anchored by drumming legend Chris Adler, whose brother Will, along with Marc Morton, takes care of melting faces with their double guitar attack. If Lamb of God had been the only headliner I think the audience would have gotten their money’s worth, but those in attendance were spoiled by what came next.

Slipknot is an institution, they’ve reached the level of success where they can have a namesake festival and sell out arenas around the world. What was once a band that scared parents has now become a family affair. The amount of children at this concert was baffling, yet this is not a slight against the band. Rather it’s a testament to their longevity, they are now a band that is being passed down to future generations. This year’s Pain in the Grass was especially important for maggots in the northwest because the band was supposed to headline Pain in the Grass in 2008, but due to ex-drummer Joey Jordison being hospitalized they had to make the show up in the fall. There were no such hiccups this time, the band came out with an intensity and theatricality that can’t be matched. The nine psychopaths in masks want to make sure everyone leaves the show with raspy voices and exhausted, either from moshing or the insane amount of fire used on stage. Unlike other bands who rely only on lighting and pyro to be entertaining, every member of Slipknot is constantly doing something, whether it be jumping from high objects, riding hydraulic lifts or violating a keg with a baseball bat. Another great quality of Slipknot is that their set lists are always representative of their entire catalogue. All five albums were represented with such classics as “Wait and Bleed”, “(sic)”, “Disasterpiece” and “The Heretic Anthem”, while newer songs “Sarcastrophe”, “AOV” and “The Devil in I” were woven in perfectly. The entire show was crafted beautifully and that is part of the appeal of Slipknot; there is beauty underneath all of horror imagery, fire and metal. Their music has always been introspective and somber, while still maintaining an angry pace. Here’s where I bring up the one downside, they didn’t play my personal favorite song off their new album .5: The Gray Chapter, “The Negative One”, which should be played at every show, it’s the perfect Slipknot song: loud, fast, dark and unhinged.

KISW put on one hell of a festival this year, booking Slipknot as the headliner and getting their tour mates Lamb of God was a gift from the metal gods. I hope that they can at least come close next year, but I trust the people at the station to pull off something great in 2016.

For more photos make sure to check out my Flickr by clicking here.

Bullet for My Valentine

Theory of a Deadman