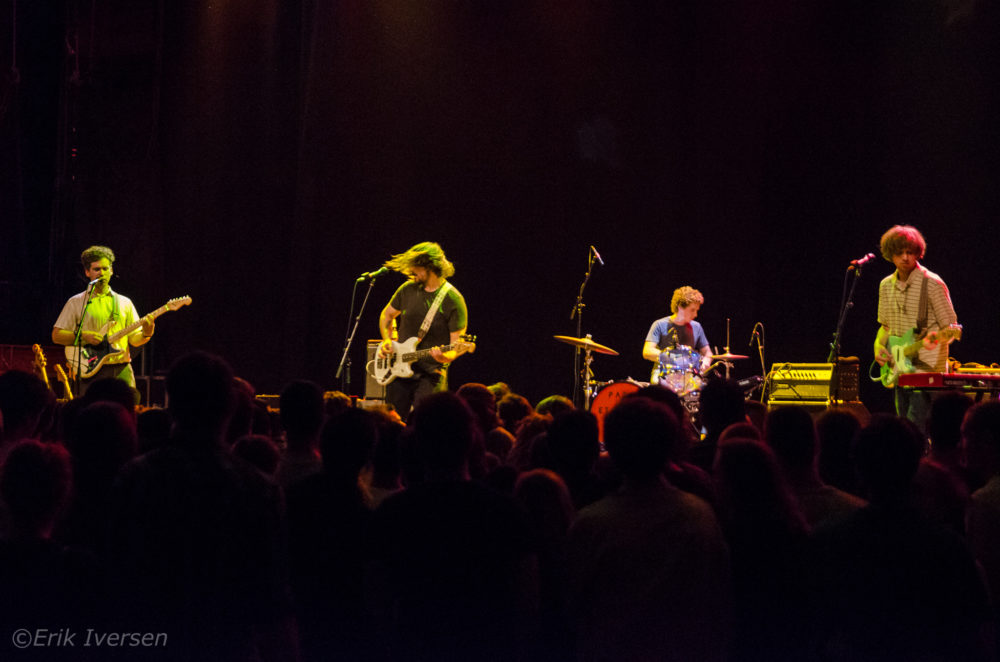 Parquet Courts (Parkay Quarts) showed no mercy Saturday night, even as their audience nearly trampled them off stage. I counted six separate boozy stage dives into the moshing audience. Each time, the band looked more fed up with the crowd’s antics than the time before, eventually dialoging with their audience, reminding everyone how nice it is at the Vogue to be able to sit for a rock show.

This diving continued until, after the sinking of the sixth wannabe crowd-surfer, Austin Brown remarked slyly that the jokers on stage couldn’t even juggle. This made his audience laugh, and Parquet Courts could not have been cooler were they long, green vegetables.

Fortunately, Parquet Courts tunes are perfect for a little crazy dancing. Their sound is generally to the point and punchy, their half-spoken lyrics shouting punk, while Andrew Savage’s sing-grimace makes you want to wiggle your butt.

There was a change in the music towards the second half of the show, marking a transition into Parquet Courts’ new album Human Performance. In their early days, circa 2011, the band was often compared to Teenage Cool Kids. The New York group’s sound is expanding, however. Americana Punk roots are still at the core of the music, but their newest album is an emotionally tender reinvisioning of this sound.

The title track off Human Performance, written by Andrew Savage, finds him shortly after a breakup. His life is in disarray, and he feels as though the darkness that has come to him won’t leave “without a coffin.” Many of Parquet Courts’ songs, even the early ones, speak about fractures and voids, but none before have so clearly spoken about a broken heart.

Towards the second half of the set, the audience became calmer, and the intense mosh pit settled into pools of rhythmic dancing. The cute red-headed girls in black with ponytails askew fixed their hair, stopped pushing, and asked around for a joint. I made friends with the guy standing next to me in a Ramones t-shirt. There was no more stage diving, just dancing and music everywhere.