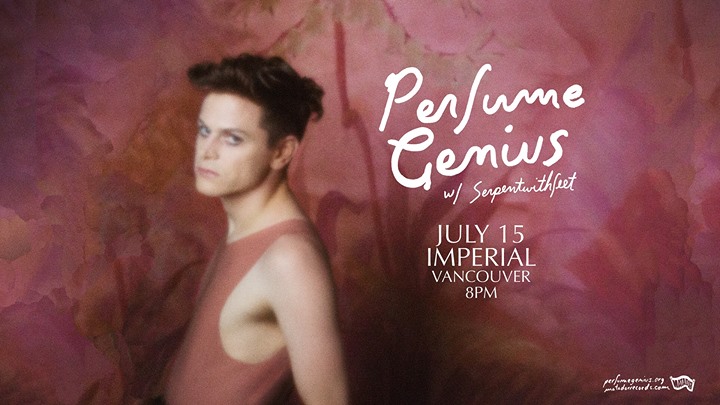 The Imperial is a wonderfully intimate space with a tendency to chew up and spit out any performer who does not properly command its audiences attention. Like the shops of the old Parisian Arcades, the Imperial represents a rite of passage out of the visible suffering and dereliction that one must pass in order to gain entry. The trip from spoil to splendor is almost instantaneous, but may good luck and fortune spare me the displeasure of meeting the person who can step off of those hackneyed and haggard Hastings street and thoughtlessly disappear into the grand gothic beauty that is the Imperial without being struck by their incredible privilege to do so.

The leading men of serpentwithfeet and Perfume Genius each exemplified a level of honesty and self-consciousness that is part and parcel with the ideal of the Imperial, as Josiah Wise and Mike Hadreas, respectively, told their personal stories of repression and revelation through their music. Wise, who along with producer Haxan Cloak forms serpentwithfeet, is lavish in appearance and demeanor. Adorned with large gold hoop earrings, an equally large and golden hoop septum piercing, thick drawn on eyebrows, large gobs of eyeshadow and a shaped, graying beard, Wise looks like some sort of beautiful alien. Combined with his sublimely powerful voice and tongue-in-cheek lyrics, Wise comes off as larger-than-life. He is aware of the nature of his subversion and the opposition he faces and he acknowledges it, but Wise seems confident and unfazed. When Wise sings, “I know you learned some fucked up shit from your mother/Had you tucking your dick/Had you hiding the shit that really made you special,” he throws the hideousness of the life right back in our faces, refusing us refuge.

As I waited for the final portion of the show to begin, I was unsure as to whether Mike Hadreas and the touring members of Perfume Genius could match the energy and passion that serpentwithfeet displayed in their set. I felt such a connection to the music I had just heard and, while I’d recently discovered and fallen in love with Perfume Genius, I still had very little ideas as to what to expect from a live performance. Almost immediately, my concerns were put to rest. The boys started with the sublimely chaotic ‘Choir,’ the first of many tracks played off of Perfume Genius’ new, universally praised album, No Shape. While Hadreas’ voice has always been the focal point of Perfume Genius, No Shape immerses his vocals in a far more lush landscape than ever before, at once testing him and allowing him more room to showcase his talents. “Just Like Love,” is a perfect example of the new-found space that Hadreas stakes out with his latest release: the verses are sung in the tortured, emotive style of Roy Orbison but the chorus is sung in a delicate falsetto. Hadreas had some trouble switching between verse and chorus in the live show but still showed impressive talent in hitting most of the notes.

Throughout the show, Hadreas and the band behind him (synth, drums and guitar) pushed the envelope on musical genre and conventional sexuality, as they blended pop, psychedelic rock, early-punk and Prince style funk with lyrics that explore homophobia, overt sexuality, self-acceptance and the discussion of homosexuality in normative terms, all while strutting, dancing, and sashaying around the stage like a modern day Mick Jagger. As Hadreas promised us on his monumental 2014 hit, ‘Queen,’ “No family is safe when I sashay.”