A mixed-bag full house was present to witness Pet Shop Boys bring their SUPER Tour through Vancouver, in support of their latest in a line of single-worded-titled albums.  Remaining prolific through their 30 year career, tonight was going to be a treat. The audience trickling in to the theatre looked to be a mix of longtime fans and newer ones – a wide range of ages and a variety of dress, including people in clubbish togs, tailored finery, street clothes, and even some nods to outfits that would have appeared in videos and tours past from the band (the mirrorball helmet was quite a standout). Over the sound system, Dead or Alive was playing – perhaps a coincidence, or perhaps a not-so-subtle nod to their contemporary Pete Burns, singer of Dead or Alive who was reported dead the day before.

This band is known for a pretty flashy show, and tonight was no exception. While the band was mostly pretty darkly lit, the focus was on the lighting and visuals, in this case all fixed on the basic theme of ‘circles.’ This is in deference to the SUPER album cover – a simple pink circle with the title in yellow caps. The audience was to its feet immediately as the lights dimmed, cheering for the band’s arrival. They framed the set with huge past hits – choosing to near-open with “West End Girls,” end the main set with “Go West,” and end the encore with “You Are Always On My Mind.” In between, they played a number of new songs, plus additional hits, at times pointing out that they had created a new arrangement for an older song. Singer Neil Tennant introduced songs very matter of factly, and otherwise only spoke a few times to thank the crowd, shout, “Vancouverrrr!” or introduce the band. Otherwise, he was concentrating on delivering his even-toned, distinctive voice over top of layers of synths provided not only by the stoic Chris Lowe, but also by a small band behind this core duo. Tennant’s movements on stage were as even as his voice – easy, deliberate hand gestures and casual sauntering about the stage. The band members – two behind percussive rigs and one with an array of synths/keys and strings – were positioned on round platforms resembling drum heads, which were also mobile. We did not see them until a few songs in though, as Tennant and Lowe began alone on stage with a massive screen closing them off from the area further than about ten feet behind them, after making their appearance out of a pair of egg-like white spheres. Tennant’s one other bit of speech, which he touched on a few points in the show, was that tonight, we are all the pop kids – a reference to a new song and a call to arms of sorts and a throwback to their early pop scene heyday. This tune was played early in the set as well. 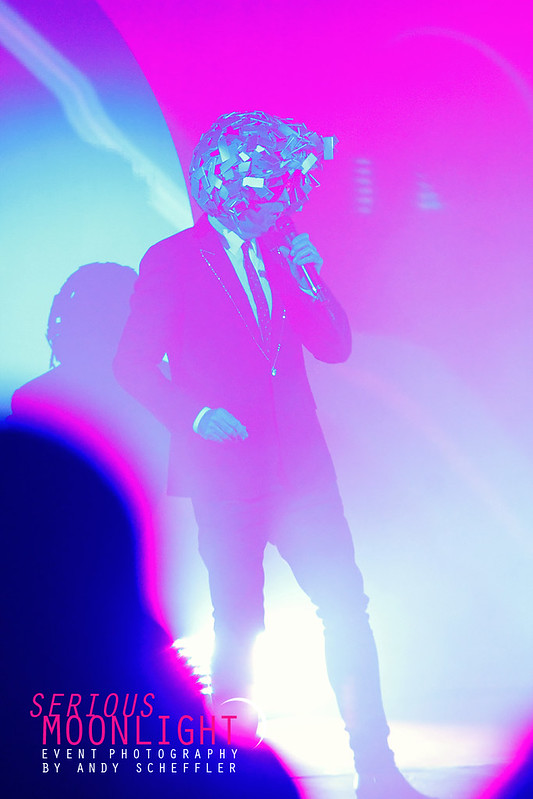 Pet Shop Boys are notorious for flamboyant, at times cumbersome-looking stage outfits. This was pretty understated for the SUPER tour. Tennant and Lowe had appeared initially in modified versions of the same perfectly-round head-enclosing helmets made of what looked like metal ticker tape. Lowe was completely hidden inside this thing and it’s a wonder he could see anything (maybe he’s just good enough to play blind). Tennant wore the same type of helmet, but ‘exploded’ out the front so his face was visible. He was simply clad in a modestly-sparkle-lined lapeled black suit jacket with a narrow tie. Once the screen behind them fell to the floor, a three-piece backing band were now visible on their own individual risers, also with faces obscured by silvery helmets that made them look like a motorcycle gang from TRON. These helmets appeared and disappeared off their heads a few times throughout the night, but within the first few songs, Tennant and Lowe had removed these. Lowe was barely noticeable in his barely-moving state behind a triple-decker keyboard stand, but he did change out his shades, cycling at least through a set of metal ones with ‘leopard spot’ cutouts and some that glowed. Tennant changed out his clothes a couple of times, mostly going for silver or gold bomber jackets, but even spending some time in a greatcoat. The other people seen periodically on stage were the techs, who were almost made part of the show. There was no blackout while they did their various stage work. They would come out looking like coal miners with headlamps and coveralls, pulling light stands, pushing the band’s risers around, or rolling and picking up the screen in well-coordinated movements as the band played various songs. 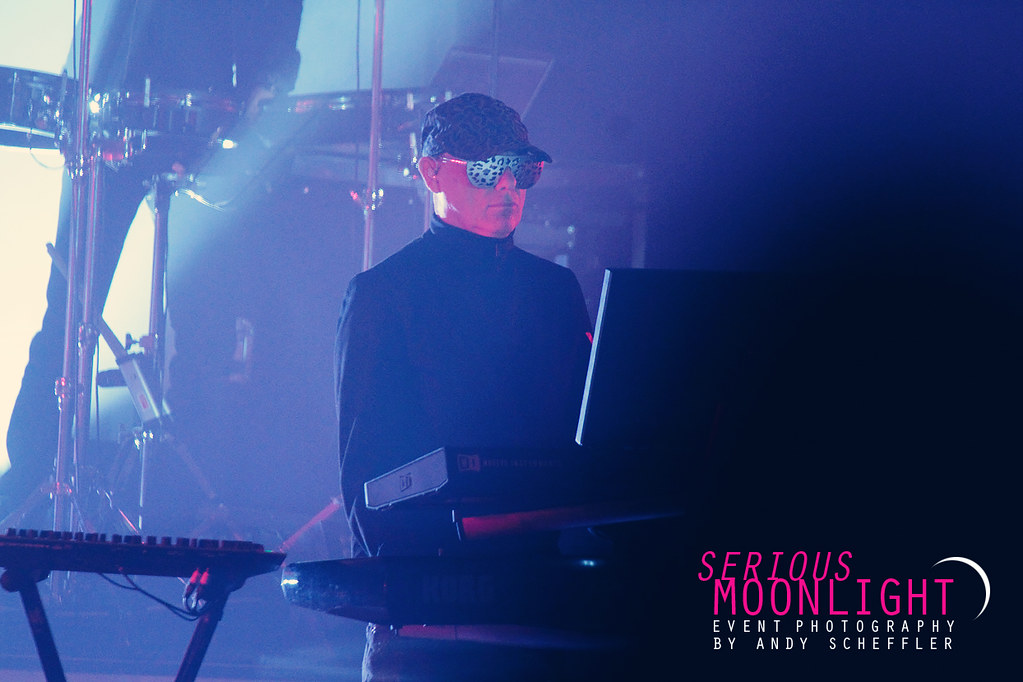 The music was well-suited to the venue, and they used the acoustics of the theatre to make their disco-kissed, driving tunes be presented to the best effect. They also took advantage of the tallness of the room and filled it with a bonafide club atmosphere. The lighting was sensational, always coming back to that circle theme. Lots of visuals of dancers were played behind the band, and lasers – so many lasers! It baffles me how lasers can be used in these shows without burning out the eyeballs of everyone in attendance, but regardless, they were put to work here. I ended up in a set quite high in the room, and in particular during new track “Twenty-Something,” those lasers just worked the space. Vivid concentric triangles and planes of light shimmered up to the rafters in time to the chugging, kicking beat of the song. The band was all but invisible under the razor-thin sheets of laser-lit cloud and fog that grew and split along with each beat. On “Love Etc.,” Tennant spent a few moments behind his own set of synths, before heading back to saunter the stage, which was divided with a laser beam of light, one side lit in red, one in blue, as dancers tussled on screen behind. Tennant made his quiet appearance in the greatcoat during new track “The Dictator Decides,” but you’ll have to forgive me for not noticing right away as I was pretty taken by the bare-chested man gyrating around larger-than-life on the screen at the back of the stage. Tennant left the stage then, probably just to get changed, but instead we were subjected to a very 1984 Big Brother-esque head of Tennant, painted and growing and splitting and singing, on the screen behind the players. It was utterly terrifying. As the show went on, it seemed to get more and more like a rave – people around the crowd popping up to dance and urge their neighbours to do the same. The cracking beats just hit you right in the heart, and the balcony level seemed in danger of collapse.The lasers continued to impress. Nearing the end of the set, another hit, “It’s A Sin,” drove the audience batshit. Silently, a lighting rig descended behind the band during this song, after the risers the band was standing on were moved forward one by one, crowding the front of the stage. The mine worker stage techs marched back out and fiddled with the lighting rig for a moment, and Tennant mashed in a couple lines of “Opportunites” before the all-too-familiar strains of “Go West” started up. The rig ascended again behind the band as amorphous jellyfish like blobs began to dangle from it. In the dark, these inflated into colourful spheres of varying sizes, lending a thoroughly festive atmosphere to “Go West” to end the set, including a brief band intro.

The audience was not having it though – they wanted more. When the band came back out, they were wearing blacklight-responsive multi-coloured soccer-ball type helmets, Tennant had his gold jacket on, and played us into an 80s encore of “Domino Dancing” and “You Are Always On My Mind.” These sunny, shimmering tunes, along with the coloured balls up on the rig ended the night on a total high. Tennant let the audience take lead vocals a few times while he just leaned back with a grin. As he and Lowe bid us goodnight, he said again, “We are the pop kids.” The backing band played on as the duo left the stage.