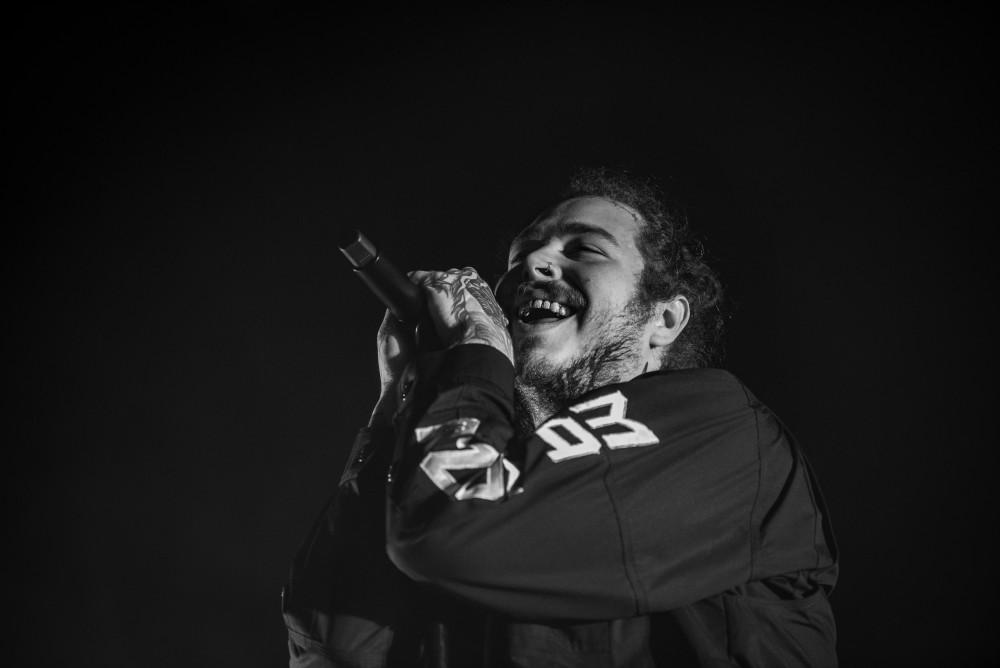 The openers for the show consisted of two upcoming rappers; Tyla Yaweh and SAINt JHN.

With a dark set and colorful lights, small-time rapper Tyla Yaweh performs in front of what he described as his ‘biggest crowd yet’. Known for his more popular tracks such as ‘Drugs & Pain’ and ‘HotBoyz’ feat. Ski Mask the Slump God, Tyla was a big part in getting the crowd excited for the night.

The next opening set was the young rapper from Brooklyn, SAINt JHN. He brought an interesting faithful component to his rap performance that not only differentiated him in the eyes of his viewers, but also helped to engage the crowd. This consisted of him having the crowd repeat after him, yell ‘Amen’ and he ended his set with a prayer. The act was flashy, fun and really hyped up the crowd for the big act to come next; Post Malone.

The speakers went quiet after playing hits to keep the crowd going as they waited for Post. A loud instrumental began to blare from the front and bright yellow lights shone from behind a black curtain, this was his signature color and everyone knew it. When the curtain dropped and smoke filled the stage: the crowd went wild and you could feel the excitement in the air.

The set began as the music blended into one of Post’s biggest songs from his prior album Stoney, ‘Too Young’. The screams were deafening as he entered the stage and began to perform. After the first song, Post expresses how grateful he is, chugs a beer and jokes about his weight; all typical behaviour for the young artist and the crowd loves it. As the show progresses, he plays a few of his new songs as well as many of his old ones; thanking the crowd between every single one. The energy in the room was electric and you could tell that Post Malone was genuinely grateful.

He then brings out his acoustic guitar and plays his two slower songs; ‘Feeling Whitney’ from Stoney and ‘Stay’, from Beerbongs and Bentleys. The audience lights up their phones and sways with the emotion in the music. In between songs, Post lights up a cigarette and laughs about how drunk he is. He begins to play again and encourages everyone to sing along.

When things speed up again and he plays some of his older and faster hits including ‘White Iverson, ‘Congratulations’, ‘Rockstar’ and ‘Go Flex’, the performer speaks on many different struggles he’s been through and how he’s made it to where he is today. The way he captivates and inspires everyone in the room is very incredible and very real; he seems to really touch anyone that listens. Post also manages to keep things extremely real as he jokes about those who discouraged him from his dreams and smashes his guitar on stage.

As the show comes to an end, Post gives immense thanks to his fans and runs up through the front rows of the crowd. Everyone seems satisfied and happy energy is still in the air after he exits. This humble and fun performance really made everyone in that arena laugh and feel a personal connection with Post Malone; he is more than a superstar and performer, he truly seems to be a great person.

I hope to see him again someday in Vancouver, but until then I will remain touched by his amazing performance on April 27th in Rogers Arena.

Did you enjoy the show? Enjoy some photos!

Were you there? Do you still have your hearing and want to relive the set? Here are the songs!

Jason Martin is a semi-professional semi-enthusiast (enthusiastic?) Canadian photographer who prefers Nikon, artists who perform under more than a single, purple (or blue/green/red) LED light on stage, and wishes you the best of luck looking for his social media accounts.