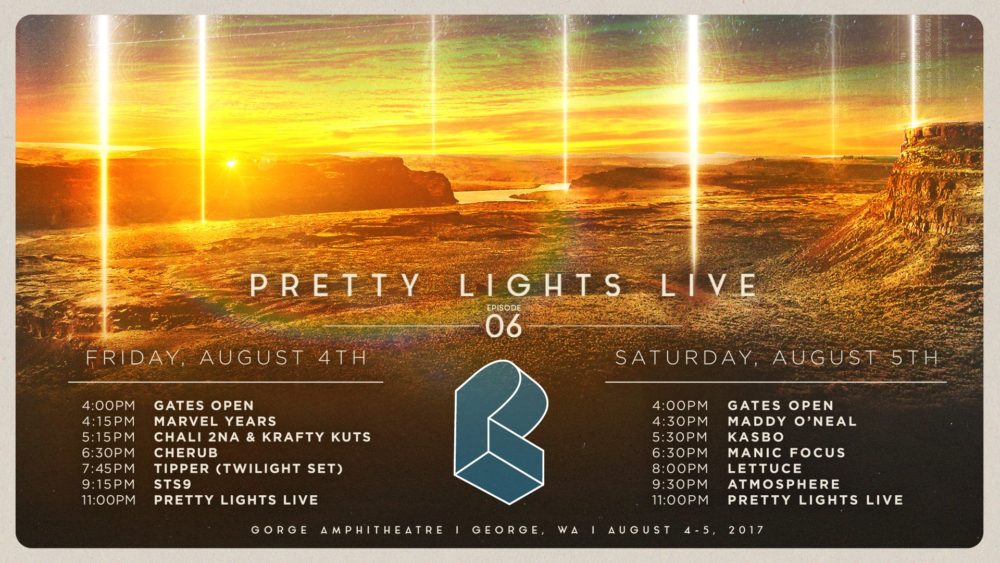 Electronic music and I have developed a distinctly meaningful relationship throughout the span of my adult life. Upon reflecting on this relationship, it is clear that Pretty Lights was the first stop in my journey through the expansive genres of dance music. I Know the Truth was the first dance song I bought on iTunes, Pretty Lights opening the Skrillex Full Flex express was one of my first dance concerts and Pretty Lights at VELD 2013 was my introduction to music journalism. With this in mind, being able to join the Pretty Lights Family at the 6th stop of his Episodic tour at the Gorge Amphitheatre was, not only sentimental, but downright emotional.

What came as a surprise to me is that the Gorge campgrounds were crawling with people just like me: tie-dye adorned, fun loving, Pretty Lights die hards. These people were primarily there to embrace the unbelievable sounds of STS9, Tipper, Atmosphere, and Lettuce, but also to join together and be with thousands of other family members in watching their godfather take over the Gorge. Amazingly, the fact that smoke had drenched all of the PNW only fuelled these fans more.

Indeed the smoke was not all bad, watching Tipper drip his strange music over the heads of these hippies while playing atop a stage that appeared to be floating at the edge of the earth was something special. He opened with the beautifully downtempo Virga and managed to up the pace until reaching the heavier side of his discography. Twilight at the gorge was clearly impeded by the smoke, but Tipper’s post-apocalyptic sound couldn’t have suited the mood any better.

Perhaps the “end of world” vibe was just what the crowd needed because by the time night had fallen they were all ready to hop in their spaceships for the otherworldly spectacle that is STS9. Their set was filled with what sounded to be UFO’s blasting off and constant string of psychedelic, electronic infused jammage. It was impossible to ignore the influence this band has had on Pretty Lights’ music: they had a touch less bass and a touch more jam than PL. They were the perfect way to set the mood for the man of the night.

Even with the tasty jams that streamed out from STS9 I was not adequately prepared for the full Pretty Lights experience. The band walked on stage and Dereck (A.K.A. Pretty lights) met fans with a shining crystal held to the sky. This first night very quickly and clearly became a platform for the band to establish themselves as a full fledged jam band, mirroring the vibes of the openers and introducing their own unique Pretty Lights flavour to the mix. Notably, the lighting and laser show was nothing short breathtaking. A full cage of lasers shot across the stage throughout the set only to be breached by a dazzling display of polychromatic stage lights. For those of us that know the pretty lights DJ sets, this live performance was something completely fresh: more mellow than when just Dereck is on the decks but not without a sufficient dose of the typical PL face melting bass. The lights shined on and the jams were relentless throughout the set with each band member making clear contributions to the sound without interrupting the flow or stealing the thunder of other member’s instrumentation. After two and a half hours of incredible music the crowd appeared to be seethed, if only until day 2.

Fortunately the forest fire smoke that had almost completely obstructed the view of the Gorge on day 1 had cleared up a bit by day two. Although most attendees spent the day hiding in the shade to avoid heat stroke, it had cooled down to a reasonable temperature by the time Lettuce took the stage. The band was a good choice for the day 2 lineup as it appeared that almost everyone needed some time to chill out before night hit, and Lettuce had no problem providing funky tunes for fans to augment their relaxation. Their set was vastly different from the previous jam bands on the lineup: far more in line with traditional styles of jamming (i.e. drawn out instrumentation) with a notable funk flavour. By the time they wrapped up their final jam the pit was packed and ready for rap legend Atmosphere.

Atmosphere was somewhat of a stand alone in a lineup primarily filled with jam bands and electronic music, but there was no doubt that he was the most highly anticipated opener for much of the pretty lights family. Within minutes the entire crowd was waving their hands at his command and most of those same hands went up again when midway through his set he asked for everyone who had masturbated early that day to raise their hand. Crude jokes aside, Atmosphere performed all his classics with the utmost class, even choosing to take a seat whilst performing his emotionally fuelled track Guarantees.

With the sun down and the stars peaking through the smoke it was finally time for the second half of Pretty Lights’ show. After years apart Pretty Lights had reformed back from the solo project of Derek Vincent Smith into the full original duo of both Michal Menert and Derek. Michal was 50% of the Pretty Lights project upon the release of their debut album Taking Up Your Precious Time but had to leave the group almost a decade ago due to unfortunate circumstances. The duo played selections from their album including the title track of the album and the highly acclaimed song Finally Moving. Before Michal left the stage Derek was sure to let the crowd know that Michal was his best friend in the world, and that this is the first time the two had an opportunity to share a moment like this. The love shared between Michal, Derek and the thousands of family members in front of them was palpable.

Shortly after, the full band took to their respective instruments and went in deep. The group took a different angle than the night before by throwing down hit after hit. Night 2 wasn’t about drawn out jams, but rather a reflection of the music produced by Pretty Lights over the past ten years. Incredibly, Lasers shot out from behind the stage to the gorge like bridges of light during his Radiohead vs. Nirvana vs NIN remix. No one wanted it to end, but no one could say they weren’t satisfied with nearly 5 full hours of Pretty Lights either.

Reflecting back on the entirety of this show the most amazing part for many people, both in the crowd and on stage, was that each act has collaborated, been influenced by or influenced the Pretty Lights movement in some way. Derek noted that Atmosphere has always been an influence of his and STS9 were one of the first acts to put the Pretty Lights name on one of their bills. This element of artist interaction added a distinguishable element of cohesiveness to the event, and emphasized the fact that this event was truly a culmination of what Pretty Lights is.

The lights were pretty, the jams were delicious and the fans were in love proving that no one puts on a show quite like Pretty Lights.