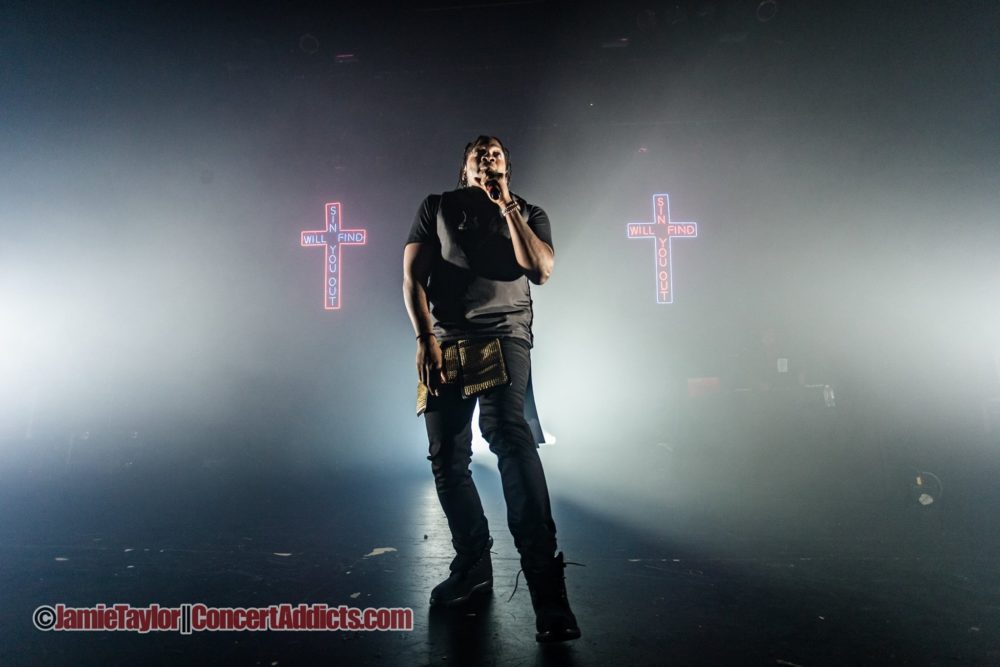 Pusha T was all action, no talk on Thursday night at The Vogue Theatre. Adorned in all black, with two neon crosses over each shoulder marked “Sin will find you out”, Pusha dominated the stage on his Darkest before Dawn Tour.

Pusha T, once one-half of brotherly duo Clipse but now a formidable solo artist, seemed a touch out of sync during the first tracks of the evening, stumbling over verses in two new songs. What may have been early show jitters were lost after a bit of warm up; from that point on it was all Ric Flair woo’s and cocaine innuendo. With little to say to the crowd or his DJ, it was banger after banger all night in an unrelenting sonic assault on the audience. That’s the Pusha we came to see!

Although Pusha T may not be known for the greatest range, he is arguably one of the better wordsmiths in mainstream rap today. It’s unfortunate that his focus – mainly drug dealing and all things related – can turn off listeners not willing to understand that creating twenty years worth of cocaine euphemisms is no easy task.

On stage, Pusha went beyond his sordid history to touch on the darkest parts of fame, vice, and police brutality. First came More Famous Than Rich, a song calling out the poseurs of the rap game who sport more interest in TMZ than financial stability. Then came Money, Pussy, Alcohol concerning “The three leading killas of you n****s”. And finally, Sunshine, his most honest and conscious song that profiles systemic racism by the police and media. This is not an easy feat for a rapper who built his entire reputation on a nefarious past but the words speak for themselves:

High point of the evening would definitely be Grindin’, a Clipse song that first put Pusha’s name on the map, back-to-back with Numbers on the Board off of his debut album. The very low point would have to have been the crowd! In the span of one hour, I saw three fights that ended with people being ejected from the building. One seriously violent altercation between two women ended with a weave being spun overhead by a spectator, accompanied by the oh-so-familiar “WORLDSTAR” chant. We get it: rap can be aggressive, you like rap, so no one should f*ck with you. You know you just missed an awesome show and lost $45, right?

Without a hype man or band for backup, it was all about how much music Pusha could pack into an hour. With a career that spans two decades in the game, that is no simple task. Ending strong with a medley of his most popular features – Don’t Like, Mercy, Move That Dope – the house shook and the crowd left satisfied. Darkest was lit, everything is Pusha T, and people should fight less.