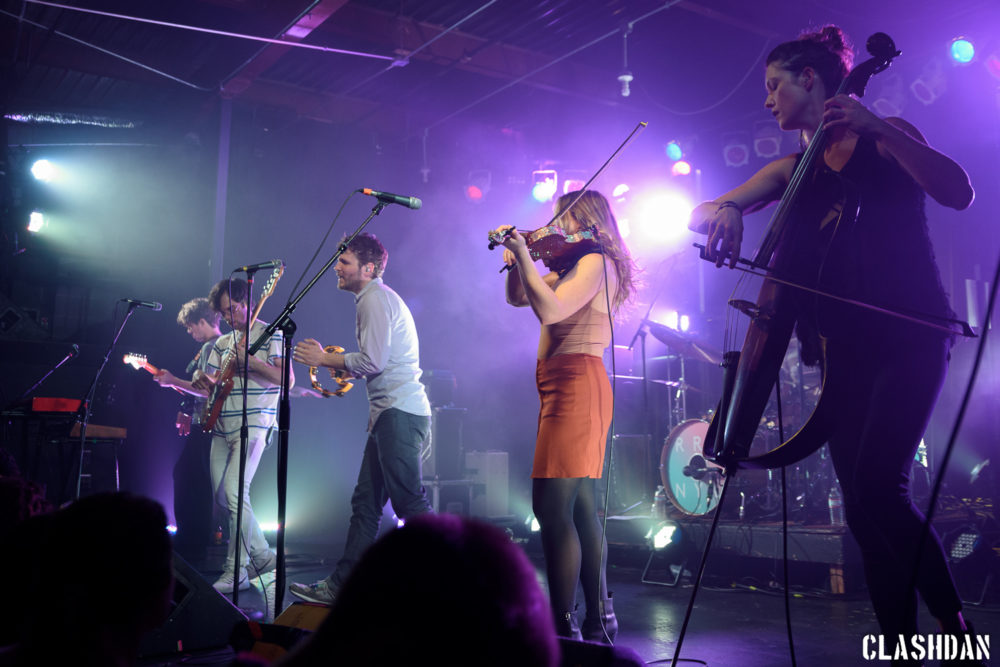 Ra Ra Riot rose to prominence playing live. They built a reputation by playing at house parties and venues in the Syracuse University area before releasing their debut baroque-pop album the The Rhumb Line. Their debut would win fans over with its rhythmic drumming, driving bass lines, and poppy vocals all underlined by violin and cello. Over their next few releases, Ra Ra Riot would expand and experiment with their sound, incorporating a newer more synthesizer-laden sound and moving from their homespun baroque-pop roots to a glossier more mainstream contemporary pop mix of dance-floor beats. The new direction would see founding member, cellist Alexandra Lawn, decide to leave the band prior to the release of their third studio album, 2013’s Beta Love. The release of Beta Love would be a tipping point for the band and the culmination of their transformation from humble indie roots into full-blown mainstream commercial electronic pop. After spending nearly a year and a half on the road supporting Beta Love, the band had planned an extended break.

You know what they say about best laid plans… Only a few months into their break and unable to sit idle any longer, band members began working on new music. The rapid and spontaneous inspiration would result in Need Your Light, the fourth full-length from Ra Ra Riot released in February of this year. Rather than continue down the heavily EDM influenced path set by their previous album, Need Your Light sees Ra Ra Riot look back to their roots. The album is a distillation of sounds old and new. The band seems reinvigorated and have delivered an album that ups the ante from their previous release across the board. Better production, more hooks, and they have embraced the more organic sounds and carefree feeling of their debut. Ra Ra Riot are now out on the road delivering the new songs to the masses, and it was with great anticipation that we caught the show recently at Cat’s Cradle just outside of Chapel Hill, NC.

The band took the stage in front of an impressive light show and kicked off proceedings with “Every Time I’m Ready to Hug” from the new album before dipping back into Beta Love for “Binary Mind,” and reaching all the way back to their debut album for the fan favorite “Oh, La.” Ra Ra Riot looked happier and sounded stronger and tighter than ever. The opening trio of songs would set the pace for the rest of the set with songs pulled from across all four of their albums, with some of the biggest cheers reserved for earlier songs like “St. Peter’s Day Festival” and “Ghost Under Rocks” that were brought to life by Rebecca Zeller’s violin and the complimentary playing of a new cellist added to the stage lineup. With bassist Mathieu Santos and drummer Kenny Bernard holding down the low end and Milo Bonacci providing buzzing hook-laden guitar riffs, frontman Wes Miles was able to focus on delivering his emotional, wide-ranging, high pitched vocals (although he would pick up and add some acoustic guitar to a few songs mid-set). The band was firing on all cylinders and there were smiles all around as they grooved through the dance party vibe of “Bouncy Castle” and “Suckers” followed by “Too Dramatic,” before a manic run through new single “Absolutely.” They closed out the main set with the rhythmic drum and synth driven “Water,” the opening track from Need Your Light. While Ra Ra Riot have always been forward focused and evolving, their new album and live show just may prove that sometimes the best way forward is to occasionally look back.

Opening the evening was queercore garage glam rock duo PWR BTTM. Consisting of guitarist Ben Hopkins and drummer Liv Bruce, PWR BTTM played through a set of loud and messy punky garage rock. Ben was a sight to behold as he delivered crunchy guitar hooks while decked out in a thrift store dress and globs of glitter-strewn smeared makeup. Once the initial shock wore off, the duo quickly won over the crowd with their energetic performance (including switching instruments for a few songs mid-set), hilarious between song banter and blaring but catchy tunes…

The middle act and lead-in to Ra Ra Riot was Sun Club, a psychedelic indie-rock band hailing from Baltimore. The five-piece band filled the stage literally and figuratively with a non-stop onslaught of fuzzy reverb-soaked psychedelic guitar that was heavy but ultimately sunny and euphoric. The band was a bundle of energy as each song blurred into the next generating an almost jam-band feel to the proceedings. At times the vocals threatened to get lost in the layered instrumentation, but the wild energy emanating from the stage made up for any potential murkiness in the sound. Sun Club worked hard and definitely kept the crowd engaged and dancing along. Setting the perfect mood before Ra Ra Riot took the stage.