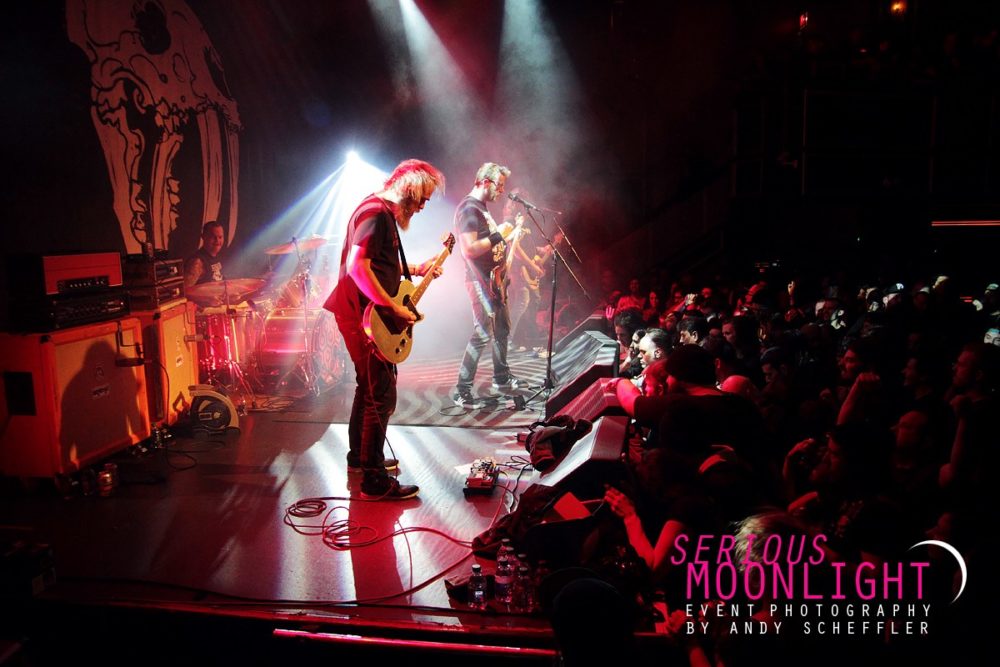 Check out our full gallery of Red Fang @ Venue Nighclub in Vancouver.

Beers, beards, and bellies were the themes on Thursday night as Black Wizard, Bison, and Red Fang brought sludge metal and stoner rock to Venue Nightclub.

Opening the evening were two local acts each exhibiting a different forte: Black Wizard hitting wonderfully melodic vocals and finger-cramping solos, while Bison focused on shaking the floorboards with the lowest-of-the-low growling and slower-than-molasses breakdowns. In the coffee world, Black Wizard would be medium roast and Bison would be dark; both are good but it’s all about preference in the end.
For this reviewer, there was something about Bison that really caught my attention. Perhaps it was the drummer who seemed to be keeping time while simultaneously performing the Haka (mouth agape, thousand-yard stare) or the ten-minute breakdown that exemplified sludge so perfectly. For the unfamiliar: imagine heavy metal as a ball of Silly Putty, then stretch it out as far as you can without snapping it, and that is sort-of what sludge metal is all about. It’s slow, it’s heavy, and it’s fantastic.

After warming the crowd up, it was time for Red Fang to bring down the house. Hailing for Portland, Oregon, Red Fang is a stoner rock outfit with heavy guitar licks and a “one-of-the-guys” attitude.

Coming on stage to Dirt Wizard the crowd lapped up vocalist Bryan Giles every word, singing “Ramble on, on and on/back to where the shadow’s gone.”

With no recent release to speak of, the evening was essentially the best of the best from the band. Playing Malverde, Predistoric Dog, Crows in Swine, there wasn’t much opportunity to slip up in front of the eager and willing crowd.
No performance goes without a crescendo and that came during fan-favourite (and internet-favourite) Wires. With more moshing and crowd surfing than the rest of the performance combined, the energy was electric as bassist Aaron Beam sang “Maybe you’ll take the Captain’s hand/ Carry his ship through burning sands/ Cradle your rifle like a man” and guitarist David Sullivan tackled the distinctive high-distortion solo. Not to be forgotten was John Sherman whose full-power drumming was always on-point.

It’s difficult to be critical when seeing a show like this – meaning just the hits without too much risk involved – so perhaps that’s one thing that was missing: new material. When it comes time for their next album to drop, you can be sure to find me amongst the beers, beards, and bellies.