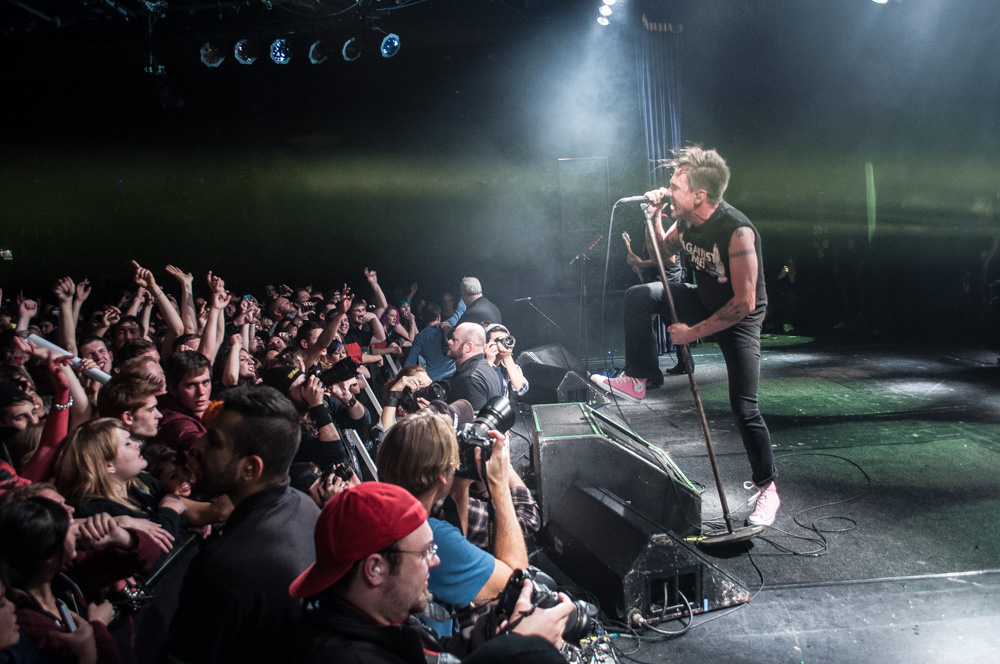 If you have listened to radio rock at all in Canada over the last decade, it’s almost impossible not to know Billy Talent. Originating in Mississauga, Ontario, the four members remaining today first met in high school. They began making music together in 1993 under the name Pezz. As you may remember Pezz candy and their little dispensers, that’s where their name came from. Personally, I hope that one day they make Pez dispensers with each of their faces on them.

In 1999, they changed their name to Billy Talent, after the character in the novel ‘Hard Core Logo’. By the fall of 2003, they released their first album under their new name, with a major record deal to match. 10 years after their inception, they blew up onto the mainstream music scene in Canada and 10 years later, Billy Talent (I) is still one of the most influential moments in their careers. Through their 3 releases since then, nothing seem to quite reach the same heights here in Canada; although Billy Talent (II) was extremely popular in Germany.

This being the 10 anniversary of the release of the iconic album, they dedicated an entire tour around it. When I walked into the Commodore Ballroom, I didn’t quite know what to expect. I had seen Billy Talent play live quite a few times. They were one of the openers for FoxFest 2004 at The Plaza of Nations and that was my first concert, so needless to say, I have a major soft spot for them. I had never been disappointed, but by the same token, I hadn’t quite felt for the newer records what Billy Talent (I) or even (II) made me feel. I was unaware of any plans they had for their song choices, so I did my best to keep an open mind and just enjoy the show for whatever it offered. After all, the last time I had seen them was in 2007 and anything could have happened in these 6 years.

The first band that I saw that evening was Mystery Machine. For those in the music scene in Vancouver/Chilliwack in the early nineties, you might recognize them. They played a modest 10 song set of nostalgia-ridden anthems from “Pound For Pound,” to “Gleam.” Their most recent release, Western Magnetics from 2012, is a much more modern rock sound, but the base elements for Mystery Machine are still on display, as shown by songs like “Pronto.” Back to the old school, from Headfirst Into Everything, they played “Ditch” followed by another classic from Glazed, “Ride”. It’s an instrumental that has played as the soundtrack of many hills being ridden in this city by yours truly. It was an especially special moment in the set on the second night of the two-night show at the Commodore, being that it was Ian D’Sa (guitarist of Billy Talent)’s birthday. He came on stage and played the song with them, but before they started, Luke Rogalsky (singer of Mystery Machine) gave him his birthday present, a 12″ vinyl of Glazed. Ian seemed enthralled with his gift and declared how much he loved the record. In the midst of this, Luke pulled out a vintage Pezz shirt that the band later explained online to be a shirt that Ian and Ben Kowalewicz (singer of Billy Talent), had gifted to the band at some point in the mid-90’s. Nostalgia was left, right and centre for everyone. By the time “Phantom Tollbooth” off of 10 Speed came on, the crowd caught the excitement. Next up was “Mouser,” followed by “Stay High,” and they ended on “Stain Master.” For someone who didn’t at all expect to see Mystery Machine, it was a rather excellent set and put me into the perfect mood for Billy Talent.

As I walked around the venue on the evening on the first show, October the 29th, the sold out crowd had managed to pack every corner of the venue. One thing that was almost impossible not to notice, much like the first time I saw them at FoxFest, was that this show was sponsored by CFOX radio on 99.3. Banners and projectors strewn across numerous walls were reminders of the radio rock fans that they cater to. The many groups of people, all buzzing with excitement, seemed to cover quite the range of music fans. From an array of ages to ethnicities and gender, there seemed to be no stone unturned. People who seemed relatively tame and well-mannered; but the moment that Billy Talent took the stage, the energy in the room instantly tripled.

The buildup began in the form of a Rage Against The Machine song, played at a much louder volume than the previous filler songs. You could hear quite a few members of the audience singing along and as the energy began the rise, I made my way from the upper level of the venue, down towards the stage. In the silence between songs, I took a breath, and then we were off and running. Guitar. Instantly, I recognized the song as “This Is How It Goes.” Cymbals. Bassline. And out came Ben and all of the energy that The Commodore Ballroom has to offer. A gut-wrenching song written about drummer Aaron Solowoniu’s struggle with MS, lyrics like “You can steal my body but you can’t steal my soul / Cause this is how it is and this is how it goes” sung in Ben’s frantic vocals are hard to stand still for. Next up was “Living In the Shadows” followed by “Try Honesty” and suddenly, I looked at the pad where I was keeping track of the songs and realized I was slowly but surely writing the track list of Billy Talent (I). Around this time, Ben informed the audience of reason for this, and it was no coincidence. For the 10 year anniversary of the release of Billy Talent (I), they felt it necessary to commemorate with all their fans across Canada.

It felt clear to me pretty quickly that the venue had been chose by design. The last time I had seen Billy Talent, they had sold out the Pacific Coliseum. Although their sound works well with an arena atmosphere, there is nothing like being up close and personal with Ben. Separating the shows over two nights left enough tickets for the public, while still performing in a space that the exuberant front man could perform to in a personal way. As he and the rest of the band worked their way through “Line & Sinker” and “Lies,” I remembered what captured me about them in the first place a decade earlier. The urgency in Ben’s vocals is completely unique, and the way it captured me in their debut album will never fade. Every lyric, every song… I had spent too many hours of my teen years singing these songs to ever forget them. When Ben led up to “The Ex,” he mentioned how it was dedicated to all the women who broke his heart. The amount of times I have sung that song after a break up, I could very well say the same. I shouted the lyrics as loud as I could with countless other voices in unison, “Why would she put me through such torture? I would have given my life for her / She was the one who knocked me over / Now I’m alone sitting on the corner.” And as with the many other times I have listened to that song filled with that much emotion, it was a beautiful release. Ben, singing with as much intensity as he does, just a few feet away, did wonders for my soul. It was official. I was back to being a true Billy Talent fan. And I wasn’t the only one. Ben even made a comment about how Vancouverites are known across the country as a bunch of hippies, but you wouldn’t be able to tell from audience losing their minds. “The River Below” came next, and between songs, Ben reminded us of the major role that Vancouver has played in Billy Talent’s progression over the years. Having recorded two of their albums within walking distance of the venue, a particular song that stands out came next. “Standing In The Rain” is a vivid walk in the shoes of a lady-of-the-night. The weather we are infamous for, as well as the harsh reality of the state of this city’s drug and prostitution trades make for quite the song. “Milk carton mug-shot baby / Missing since 1983 / Standing in the rain / 20 years of dirty needles / Raindrops runnin’ through my veins.”

They finished their “Time Machine” set with “Cut the Curtains,” “Prisoners of Today,” and “Nothing to Lose.” Before the final song, Ben declared that the last song goes out to our prime minister, Stephen Harper. “Voices of Violence” capped off the first time in my life I watched a band play an album from beginning to end. Of all of their music, the first album was most impactful to my life and I could not have possibly asked for a better night and I was genuinely thinking that’s all I got, and thankful for it!

Nope. Billy Talent doesn’t quit at 12 songs. They returned for an encore that consisted of “Viking Death March,” “This Suffering” and a rare one to play live, “Pins and Needles.” This was followed by “Diamond On A Landmine” and if I’m not mistaken, this is around the time that the discussion of bras came up. A lady threw her bra on the stage at some point before during one of the songs and now Jon Gallant, bass player extraordinaire, was returning it to her. Ben didn’t feel that was very punk rock, so he wanted to know why Jon had thrown it into the audience. He explained that she had asked for it and Ben didn’t seem to like that. He took the bra for himself and mentioned how much padding there was in bras these days. “You’re all cheating!” he shouted. Some people are born entertainers and Mr. Kowalewicz is definitely one of them. After we moved on from the bra bit, they ended the set with “Devil On my Shoulder,” but I didn’t feel the show could be over quite yet. They hadn’t played “Fallen Leaves,” the final feather in the cap of their songs based on Vancouver’s seedy underbelly. We waited, and chanted, and waited, and then they took the stage for a third time.

Though major Canadian cities will always share a connection, especially Vancouver and Toronto, there is one thing we will never agree on. Ben told us to help him sing the next song. “It’s an easy one. It goes ‘Go Leafs,Go!’ ” and quickly, the crowd booed. Soon enough, we started our own chant. “Go Canucks, Go!” He eluded to thinking that the Leafs would be able to beat the Canucks that upcoming Saturday (spoiler alert, the Canucks shut out the Maple Leafs 4-0). He concluded with a sentiment I share. “Honestly, can we have a Canadian team win the cup this year?” It’s about time.

The show ended with “Surprise, Surprise” followed by “Red Flag” and I walked out onto Granville Street with a sense of renewed faith in Billy Talent. I may never feel the way I did as a teen again, but I will always immensely respect them as musicians, as performers and first and foremost as people. It was an utter pleasure to watch them play Billy Talent (I) in its entirety, and it was nice to watch the growth since then. Until the next time I’m lucky enough to catch them play, I thank them for visiting us in Vancouver for their 10th anniversary of Billy Talent (I), their 20th anniversary as a band and even Ian D’Sa’s birthday!