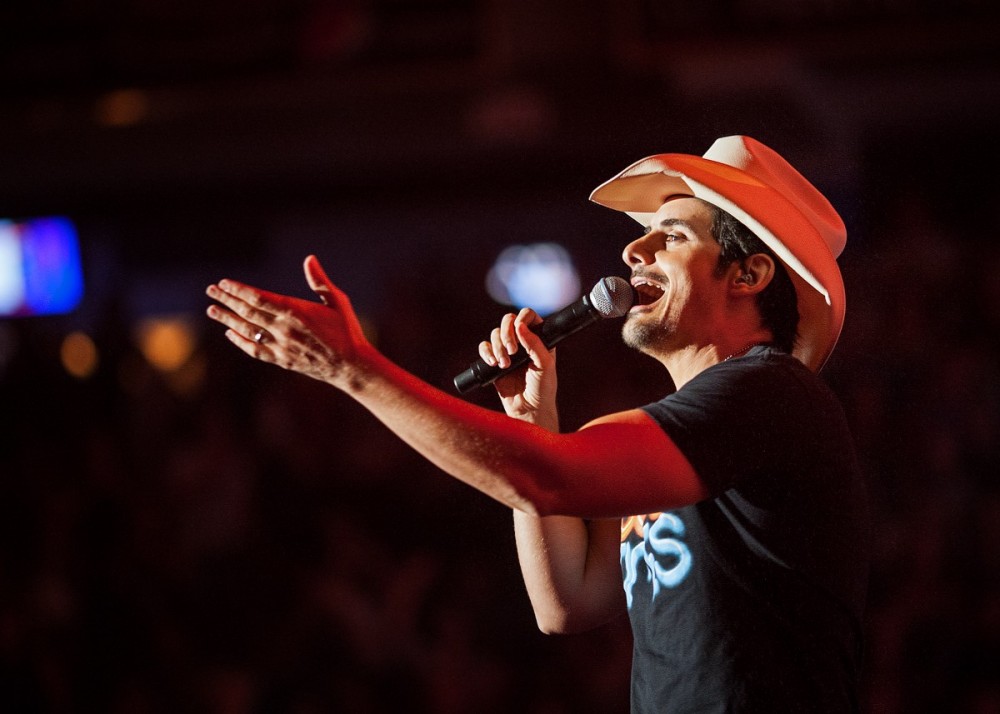 Approaching the Southern Events Center in Penticton you couldn’t help but notice the quantity of rigs with Brad Paisley’s colossal image strewn across the trailers. This was just one of thirty-six stops on the apparently high budget trek across North American named the “Beat This Summer Tour”. Earlier in the day we were notified that Chris Young couldn’t make it due to an illness, so Brad’s set would be extended even longer. I suppose bittersweet news for the Chris Young fans, however you can’t go wrong with a longer set for the main act.

With that said there was still one opener, the proud Texan Kristen Kelly. How do I know she was from Texas? Well in case you have never actually met a Texan, let’s just say they let you know quickly and often where they are from. Kristen’s bluesy and powerful vocals kept the audience involved and seemed to make good backing music for all the cowboys and cowgirls lined up for beer in the concourses as well.

Kristen Kelly played an hour set and then it was time for the man who everyone came to see. Brad Paisley and his band jumped out onto the stage to a fairly elaborate laser production depicting almost childlike cartoons. Brad used every inch of the main stage to interact with his fans. He signed autographs while singing, touched hands, got hugged by a girl that jumped on stage, and even gave away one of his acoustic guitars to a young fan. Now that’s what I call multitasking. The production value of this show was equally as impressive as the fan interaction itself. From the integration of some of Brad’s favourite artists plastered across the screens (Alabama, George Jones, and Van Halen), to the multiple stages across the floor, and the terrific animations it really gave the impression that this was a big budget show. Brad effortlessly tore through his extensive 14 year catalogue of hits including “The Mona Lisa”, “This is Country Music”, “Old Alabama”, “Karate”, and “Mud on the Tires” to name a few. I should probably mention that Brad can also shred the guitar like no other country artist I have ever witnessed. The Van Halen “Hot for the Teacher” cover was an unexpected highlight from Brad and his band. It was Flawless. He really must be a guitar enthusiast as Brad played roughly fifteen different guitars during the show. Just when you considered it wasn’t possible for an artist to interact with the fans any more, Brad and a couple band members marched to the back of the arena to play an acoustic set on an intimate stage for the people in the cheap seats. Nice touch for sure!

Brad definitely seems to be at the top of his game as was displayed by his performance. Whether or not many years from now he goes down as one of the all-time greats in country, I can honestly say I was glad to see him perform in person. Cudos Mr. Paisley! Great show.

Error: API requests are being delayed. New posts will not be retrieved for at least 5 minutes.