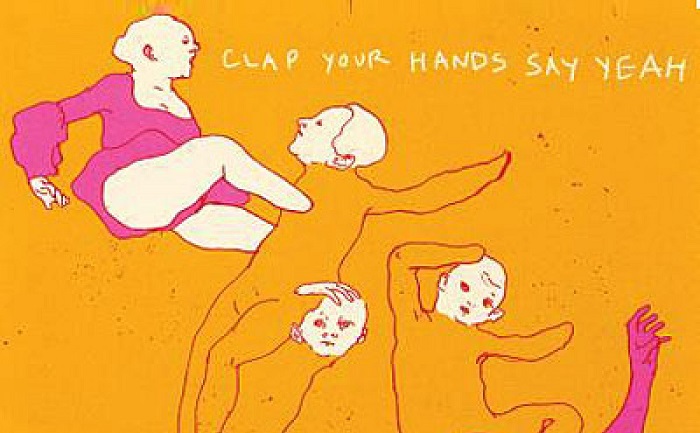 I’ve been really behind on Clap Your Hands Say Yeah.

When I first heard their self-titled album, I fell in love with Alec Ounsworth’s off-key, nasally yowling. It shouldn’t work but it does with each and every song. Some Loud Thunder came out and kept my attention but somewhere between 2007 and 2011, I fell off the wagon and lost touch. Listening to Hysterical and Only Run now definitely sounds like there was a push into more electronic sound but it seems like the majority of the band moved on after Hysterical so Ounsworth had to pick up the slack himself.

I’d actually gone to review CYHSY a few years ago after their third album had come out but my wonderful luck sent me to Electric Owl, where the show was supposed to be, only to find out it had been moved. Thankfully the fellow at the door let me know the show moved to the Biltmore, where Zeus was supposed to be playing that night. I was really excited to see two awesome bands in one place only to get there and find out that, yes, Zeus was playing there but CYHSY was definitely not; they were downtown at Venue. So after being kind of late to Electric Owl, I was now VERY late to be heading to Venue and as I was having an internal struggle on whether to call it quits or not, the guys from Zeus came up to see what I was apparently obviously fretting over. They said to just write “Yeah, show was great, loved it” or something to that extent and were just generally great guys.

Point is, I called it a night and didn’t go, so this night was my second chance and I wasn’t planning on missing a second.

The night started with Ounsworth playing solo which I didn’t realize at first, so I was real confused as he took the stage and an electronic humming looped behind him as he played guitar that didn’t sound like it made sense with the tempo of the humming and sang like he was eating the mic with distortion cranked to the max. The next three songs of the very short 4-song set were better in my opinion but I was very okay when his supporting band came out (Matt Wong on bass, Nick Krill on guitarist/keyboardist and drummer Patrick Berkery, previously of The War on Drugs).

An electric drum beat started up and ‘Blameless’ from the freshly released Only Run started the night with the sound of synth and snare clicking. Things quickly went back to the older albums with ‘In This Home On Ice’ (Clap Your Hands Say Yeah) and the crowd-loved ‘Satan Said Dance’ (Some Loud Thunder). There isn’t a hell of a lot to ‘Satan Said Dance’, but that frantic piano playing, and all the bizarre things that go on during the instrumental parts between Ounsworth’s singing just click with me. Not to mention that the chorus is just simply and fun to sing in a big crowd of people as the drums build the song back up. ‘Gimme Some Salt’ is the song that makes most sense as the fourth song that they played but I was running on 4 hours of sleep, so maybe I was just losing it. I am sure, however, that the single from Only Run, ‘Coming Down’ was played next, though it was sadly missing Matt Berninger’s beautiful and haunting deep voice.

‘Beyond Illusion’ (Only Run) has another electronic drum beat behind it that makes me instantly think of Radiohead every time but the strumming that drives ‘Is This Love?’ (Clap Your Hands Say Yeah) forward is unmistakeable for me. People were clapping along as Ounsworth’s tongue somehow managed to wrap around the chorus of the song that his mind had somehow managed its way to weave through. More of Clap Your Hands Say Yeah came with ‘The Skin Of My Yellow Country Teeth’ which was the first CYHSY song I heard and instantly fell in love with. Ounsworth’s voice shouldn’t work with it but somehow he manages to kill it live as well as on the album.

‘Some Loud Thunder’, the title track from their second album made an appearance before more of their self-titled album came in ‘Over And Over Again (Lost And Found)’. Even as the bizarre recording that marks the start of ‘Only Run’ (the title track of the new album) came on, I was really happy with the number of older songs they were playing. So even though I did quite like ‘Ketamine And Ecstasy’ (Hysterical), I couldn’t have been more happy with hearing ‘Upon This Tidal Wave Of Young Blood’ to finish the set right after.

An encore of ‘As Always’, a slower, softer song from the newest album and ‘Heavy Metal’, another amazing song from their incredibly solid self-titled first album capped the night off real well.

I’d only listened to the first two albums up to the day before the show but following that night, I’ve gained some appreciation for their third and last album as the original line-up as well as the duo-project that was Only Run. As long as CYHSY keeps playing a lot of their amazing backlogs of material, I’ll want to keep coming back.