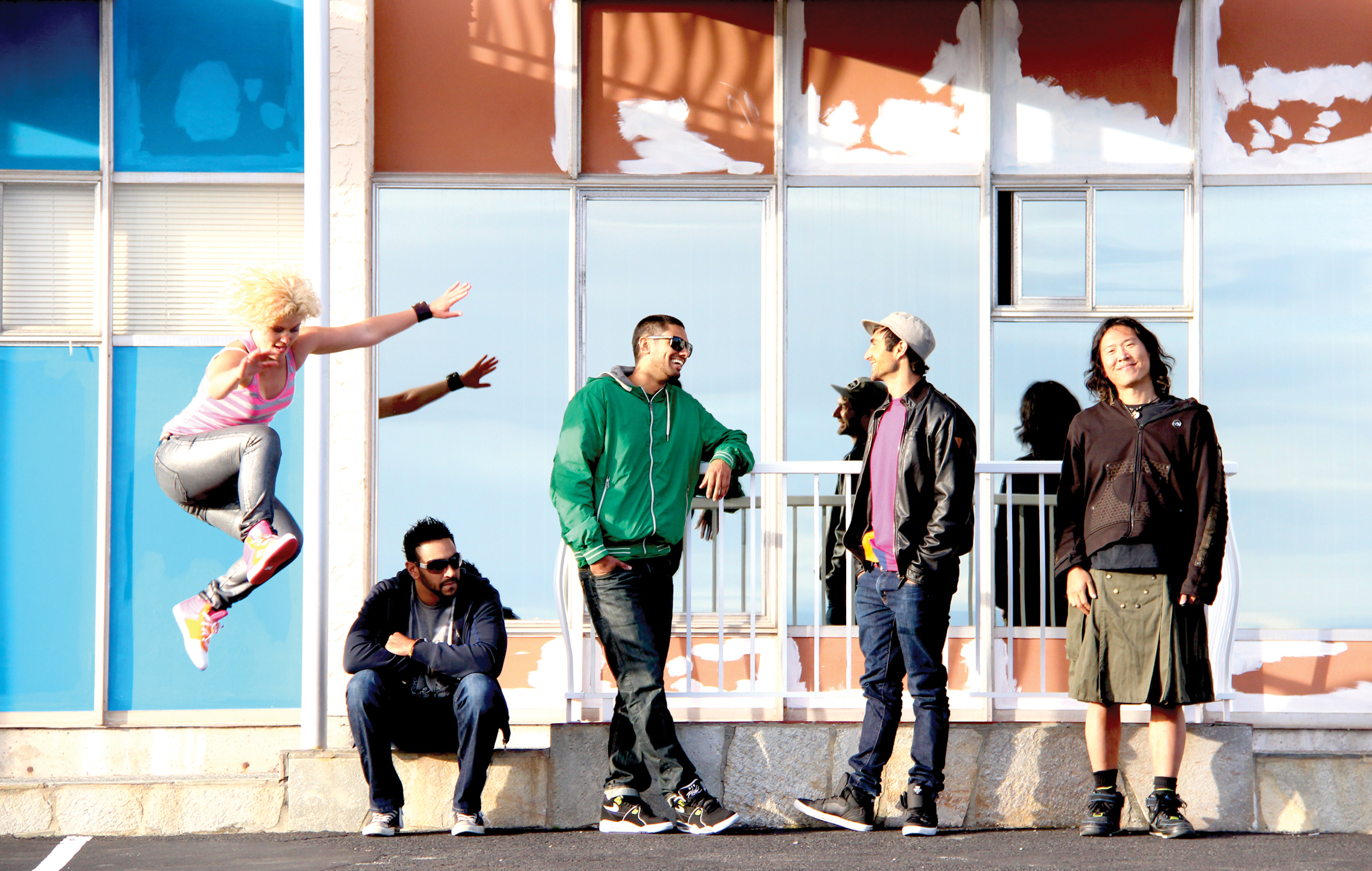 For this show, I’m well and truly on my own for setlist things – no interweb resources guiding me through an approximation of what’s going on – unless the band introduce a song (or the title is blindingly obvious), this is going to a review by yours truly unlike any you’ve read before. Who knows, you might even prefer it this way.

The opener aren’t such in the traditional sense – they are 2 DJs and do their thing for an hour before D2D do their bit for 90 minutes or so before coming back to see the crowd out until closing time. At half past nine, when The Funk Hunters start spinning, from where I am, I can see the floor is loosely filled with people. They’re definitely warming up the crowd because the Vancouver reserve is still in effect. They have a rectangular screen behind them alternating graphic designs with photographic stills and video clips. I’m not going to pretend I know anything about DJing; I think I detect use of samples and every time one of the two addresses the gathering crowd on the dance floor, there’s good response from them. For anyone seated, what they’re doing is more background noise and they carry on with their conversations unabatedly. It’s a mixed crowd – from barely legal to middle-aged and bald(-ing). I enjoyed The Funk Hunters’ jam for the first half hour or so, and then it got a bit tedious. The beat barely wavered and crazily, I thought, I might as well be on a treadmill or something, it’s so steady at a medium tempo that would get your heartrate up. Seeing as I was here to see a show and this can’t really be considered one, you’ll forgive me if the monotony bored me. I would also argue that the enthusiasm of the floor had reached their peak and was waning by the time one of the DJs promised they would be back in an hour or so. I hope you’ll take it as read that I won’t be staying for their actual set.

When Delhi 2 Dublin come on stage, I see Ravi and his warm smile, Tarun is manning the electronics, Sanjay is at the microphone. Instead of Sara Fitzpatrick, Jaron Freeman-Fox is playing electric guitar (but the fiddle comes out before long), and Andrew Kim, the utility-kilted, electric sitar playing Korean band member was also not on stage. Curious. I wasn’t sure if I missed a memo (okay, not officially on the mailing list but I do follow them on Facebook). No matter, “Our House”, the current album, Turn up the Stereo’s lead-off track, starts us off tonight. This is a band whose music is meant to be played loud, so the rhythms and melodies and electronic effects fill your senses, and you don’t think, you just are IN it – in the music, in the moment, swept along by the current. “Ve Mundeya” follows – oh right, buddy’s got hips – moving on. I have no idea what the next several songs are called, but there’s activity galore. Ravi moves out from behind his percussion station with his dhol and is mobile for the next few songs. One I didn’t know (the 5th song of the set) had a great fiddle & percussion focus and Tarun starts off at a pair of floor toms (the drums) and ends up at the tabla. For the 6th song (possibly “Tommy”), the no longer absent Andrew arrives, therefore the electric sitar portion of the evening can begin, because up until now, the melodies have primarily come from Jaron and Sanjay. There’s a sitar-and-fiddle-off contest between Andrew and Jaron that was fun to watch.

Next, Jaron gets an opportunity to show what he can do. Everyone leaves and Jaron first strums his fiddle like a guitar for a bar or two, then adding layers to that initial loop on his fiddle. The piece itself wasn’t easy to hear due to inevitable chatter (one guy, one instrument, a few hundred people talking) but what I did hear was incredibly cool.

When the band return, Sanjay has to do a bit of ‘health & safety housekeeping’ – please don’t swing or hang from the massive camera arms that were anchored at the lateral sides of the dance floor and reached over the dance floor – mostly aimed at D2D, but I’m sure also captured quite a number of audience shots (I wonder if anyone signed a waiver to that effect?). The point of the cameras was a ‘project’ of some kind. Oh, you creative types.

Next song (#8) featured quite a bit of distortion on the microphone – couldn’t even guess which language it was in, so, not going to. Maybe you can help: it starts off with a standard sounding reel (I think), there’s a sitar solo in it and when it really gets going, Sanjay and Tarun are each having a go at a tom in the back and Ravi joins in with the dhol for the percussion interlude of the song before the fiddle comes back in to take the song ‘home’. The next one, my notes just say “who knows, who cares” – it’s just pure fun with fiddle and percussion playing off one another (no Andrew for this one). “Praise You” followed – YES, a song I know the name of. If I heard Sanjay correctly, this might be the last time they’re doing this one. I hope I’m wrong: granted, the song is from AGES ago and they might want to move on, but I just love the bhangra sounds added to it which imbues this song with even more energy. They pull all the stops out in the percussion department; the audience sings part of the chorus. It’s just fabulous, and then it just petered out as if they got distracted but then Jaron chimes in and we’re back on track. #11: name this tune – it has ‘singbacks’ between Sanjay and the audience, Tarun plays the toms, and Ravi’s smile is so bright, you could probably tell if any of the drinking glasses at the back bar had any water spots from the dishwasher. For the 12th, Tarun grabs a tom, starts a beat (resembling a heartbeat, I think) and drops onto the floor disappearing into the crowd. Sanjay plays the remaining tom and Ravi carries on as well, and Jaron just shreds on his fiddle. When Tarun comes back, he’s at his DJ station. Not sure if the exercise was successful. But the next one is moreso. He asks the audience to get their hands up (like you’re 5 years old) and embarks on one of the ultimate trust exercises: crowd surfing! Next was a really interesting scat/rap piece, accompanied by what looked to be a 2-octave Casio-like portable keyboard set against a grounding beat. Very cool. Andrew returns for the next song, Tarun on tabla: it was high energy and had the crowd jumping, even the people on the sides by the tables. I think ‘summertime’ may have been a lyric in it. Doesn’t really matter – everyone is into it. “Code Red” followed: Tarun on keyboard (not the mini one), Jaron is on electric guitar to begin with (fiddle is needed), Ravi is back at his ‘station’ and it’s all WOW. I love that build in the tension and as the stage is awash with red and purple lighting effects, it’s one of the most impressive songs of the night.

Instead of going right into the next song, the band pause long enough to hear the cheers and whistles of appreciation the crowd send their way – and then they’re off with “Revolution”, using distortion on the microphone for verses but chorus was undistorted, which I prefer because I really like Sanjay’s singing voice. When that bit was done for him, he moved back to the pair of toms, moved over a stand with a ride cymbal and a tambourine stand, and away they all went instrumentally. “Turn Up the Stereo” was the last song (#18 by my count) and it started off a little subdued (why was I worried the full-on treatment might not kick in?), Jaron switches from electric guitar to the fiddle and even then, it’s super percussion-centric for the instrumental parts and it’s kind of glorious.

Before they leave the stage, Tarun sends out love to The Funk Hunters who have a full set lined up and mentions that they only have 2 songs left. It’s 10 to midnight when they leave for a minute or so (Hydration? Towelage?). When they do start again, they go a full 10 minutes without stopping, so one song followed right on the heels of the other. We’re fast, very fast, have a breather with a slow-ish part, and then fast to circle around to how it began only to take off in another direction as another instrumental element is explored. Something else from Turn Up the Stereo (I’m sure I heard “Ilove” and “Bali High” over the course of the evening, it may not have been exactly here), then “SOS”. An exhausted group hug signals the end of the Delhi 2 Dublin set – and as the house lights come on, the floor is as full as I’ve ever seen it.

Best of luck at SXSW! Represent!