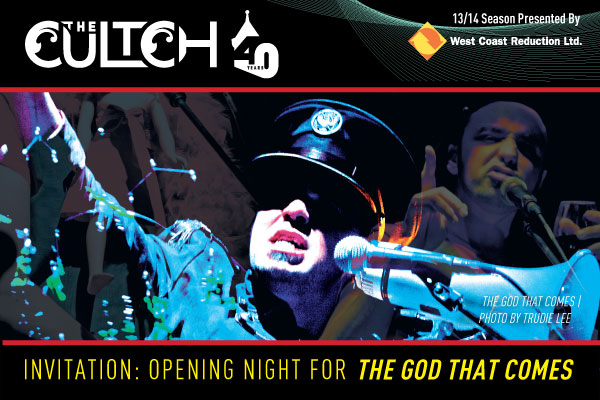 Performing in East Vancouver’s Clutch Theatre, The God That Comes features a simple but lush and theatrical background. The show itself is on a dark stage with small bands of light illuminating a buzzing and fanatic Hawksley Workman. Juno winner and long-time hard working Canadian artist, Hawksley Workman’s flamboyant and cabernet musical style is perfectly suited for a theatrical play. Combined with his acting experience from Canadian programs like 18 to Life, Workman showcases his extreme and varied talents as a musical performer, actor and writer. While acting and musical are often blended in musical theatre, Hawksley’s many years as a songwriter, poet and rock n’ roll personality elevate the project to a level of brilliance. The stripped down nature of the play perfectly suit’s Workman’s ability to continuously switch between percussion, guitar, keyboard while all the while singing of sex, cross-dressing and drunkenness. Having constructed a play with folk, pop and rock and roll, Hawksley Workman excels at recreating the sentiments of Greek myth in song. The result is a play that is profound but unpretentious; thought provoking but accessible to all members of humanity who have a common interest in the forces of desire, lust and love.

The interpretation nature of The God That Comes is impressive: “If your prayer was a dress, would it be short cut?” Workman’s lyrics explore sexual intentions and frustrations as the protagonist, a King at odds with recent festivities performed by followers of Bacchus, especially when they include rumours of the king’s mother. The spirit and impressions of the ancient Greeks are Workman’s priorities; the story is both casually explained and reinvented through song. While there is a decidedly modern aspect in the costume and tone of the performance, Hawksley Workman’s attitude remains deeply respectful of the spirit of Bacchus, the Greek god of wine and ritual madness. Workman’s opening performance in Vancouver was lively and seamless. The play is full of jokes, lethargic sentiment and the best sexual harmonica innuendo you are ever likely to see! Throughout the play, a tall glass of wine was never outside of reach of the performer, who paid his own tribute to Bacchus in its consumption. Workman looks more than well-rehearsed; he looks at home.

The staff at the Clutch are well aligned with the spirit and demands of The God That Comes. During the opening introduction, the audience was assured that “this play is all about wine and sex…. So go grab yourself another drink before the play starts!” They are correct: wine, myth and music are a very good combination. The obscene frenzies of Bacchus’ cult gatherings on which the play is based may be observed from a safe, tipsy distance. The God That Comes is a bold examination of desire; it is a stripped down but efficiently produced one man show. The frequent nods to madness and sexuality are not unlike classic musicals or rock operas like PinkFloyd’s The Wall or Rocky Horror Picture Show. Hawksley Workman has created an art piece that is instinctively powerful; the hybrid nature of this work is a tribute to the ingenuity by one of Canada’s most underappreciated artists.

The God That Comes runs at the Clutch Theatre until November 24th. Front row tickets with Premium Cabaret-style table upfront with Wine and Cheese are available. Ages 19+.