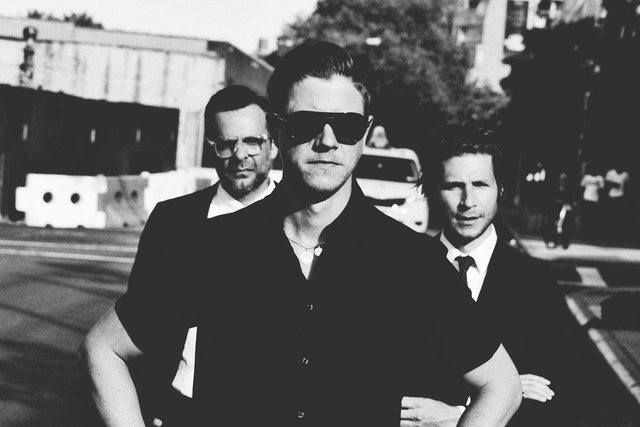 It was around grade 10 that I first heard Interpol. I was watching ‘The Wedge’ as a part of my Friday night routine when ‘Obstacle 1’ came on and blew my mind. Paul Banks’ voice was unlike anything I’d ever heard and I loved it. Turn On The Bright Lights came first, and Antics soon followed. I foamed at the mouth for Our Love To Admire and then lost track of the band to be a bit let down by, at least in my opinion, the lackluster self-titled album.

When I heard Interpol was coming to Vancouver there was no way I was going to miss them; I’d been waiting for this moment to come. Better still, I listened to the first two songs released from El Pintor, ‘All The Rage Back Home’ and ‘Ancient Ways’, and all that excitement that I felt in 2007 came flooding back.

Opening for the New York City band was Rey Pila, a band originally from Mexico City who made their way up to New York to eventually join Julian Casablancas’ label Cult Records. I came in at what I think was the start of the first of their (assumed) ten song set. Their sound just oozes the 80’s; the synthy background noise, sound of the guitars, and Diego Solórzano’s voice that instantly made me think of Bowie (which seems to be a common comparison) made the perfect throw-back mix. Drummer Sebastian “Zoell” Farrugia is a newer addition to the band but definitely anchored the band into place with his heavy playing style which is good for the floating, airy sounds of the guitarists. I’m not super familiar with the band’s material, but I definitely recognized a few from their self-titled album (the set closing ‘No Longer Fun’ being a very obvious one) as well as the song ‘Alexander, which was the first song of theirs that I checked out online. ‘Order Police’ was my highlight of their set; I always love the rattling of the high-hat and the push of a song that’s going somewhere.

Though the band put on a good set, it didn’t really seem like the crowd was getting into it. Maybe it was because it was a Monday night or because Interpol fans were there for Interpol and didn’t care about anything else but there wasn’t much movement in the placid crowd. Solórzano tried to get the crowd riled up a few times but it seemed to only get through to a few of many. Regardless, if you’re into 80’s sounds, they’re a band you’ll want to check out.

My friends Greg, Aaron, and Molly showed up, and we took a spot on the railings at the side of the room where we could see without a support beam blocking anyone out. The stage was set up for Interpol; you had your screen for a projector at the back of the room, rotating light panels, the lights above the stage, and background noise to build up atmosphere as lights dimmed for the band to take the stage and surprise me.

Though not the song that turned me onto the band ‘Say Hello To The Angels’ is easily one of my favourite songs off Turn On The Bright Lights but an up-tempo version of the song was not what I was thinking I’d hear that night. I’ll get it out of the way early but I think that Interpol has one of the best examples of balance in complementing sounds. The use of toms and the bass drum is balanced with the splashing of cymbals, the extremely twangy guitar is perfect for the deep, heavy basslines, and then Paul Banks’ voice cuts through it all with this difficult-to-imagine range of monotone that is my favourite part of every song.

‘Evil’, from their second album Antics was expected at some point in the set but ‘C’mere’ from the same album was another favourite of mine that I just didn’t see coming. So far the band had surprised me in the best way in their song choices, and ‘Same Town, New Story’ from new album El Pintor kept the good stuff coming. ‘Same Town, New Story’ is another example of how the members of the band complement each other, with each part being very significant and different but fitting together like a puzzle. ‘My Desire’ (El Pintor) is another great example of pieces fitting together as well as Paul Banks’ ability to light my brain on fire with pleasure using his voice.

‘Hands Away’ (Turn On The Bright Lights) slowed things right down to ease into my favourite song from El Pintor, ‘Breaker 1’. As the screen flew through the mountains behind them, I stood there taking the song in, loving every time that they kicked into the harder part of the song. I love the pull back and push forward of the style of song; when it’s done right, I just can’t stop listening and Interpol did it very right.

‘Not Even Jail’ (Antics) had new bassist Brad Truax playing loud and heavy, really showing off his sound before he had to pull back for the softer ‘NYC’ (Turn On The Bright Lights). ‘Take You On A Cruise’ had a fitting stormy sea projecting behind them, and it was about here that things got a bit unsteady.

‘Anywhere’, another song from El Pintor had the band kind of falling apart as somewhere in the song someone seemed to miss something and skip ahead a bit, which was jarring. Sam Fogarino was also having a bit of trouble with some of the drum fills, which is fair because if you see them being played or just listen to them, they don’t sound easy to pull off at the pace of the song. ‘My Blue Supreme’ (El Pintor), I had major issues with that night. For the 30 seconds or so of the song, I couldn’t hear Banks at all, and then when I could hear his falsetto, it just sounded off. Though he certainly pulled it off on the album, it didn’t seem to translate so well into a live show. Thankfully ‘Slow Hands’ (Antics) was there to pick up the pieces and get the band back together for the end of the set.

The first and only song from the self-titled album, ‘Lights’, started the encore off right with the slow build-up of the song and amazing, explosive bass-line. ‘All The Rage Back Home’ (El Pintor) was expected to be heard that night and it certainly was but once again the band seemed to fall apart on a new song. Things got off on a rough start and the guitar line just wasn’t cutting it and sounded sloppy half the time. More importantly (at least in my opinion) was the incredibly lack-luster “hey, hey, hey, hey” from Brandon Curtis. Not all his fault though, there really should’ve been more than one person yelling it but when it’s a very obvious and major part of your chorus, you can’t have someone saying a part into the mic that needs to be yelled. It was just kind of disappointing to get that kind of experience from the first single off the album they’re touring for. Thankfully they had ‘PDA’ (Turn On The Bright Lights) and its 200 couches to fall back on and leave me wowed and happy with in the end.

I really think that ‘Anywhere’, ‘My Blue Supreme’, and ‘All The Rage Back Home’ needed to be tighter and have more work put into them before being played live and I (as well as my friend Greg) was really bummed that there wasn’t a single song played from Our Love To Admire. I don’t know if the album is off-limits, and reviews seem to be pretty divided on the album but ‘All Fired Up’, ‘Mammoth’, ‘No I In Threesome’ and ‘Who Do You Think?’ are some of my favourite Interpol songs and I would’ve loved to have heard at least one of them amongst what was a mostly bullet-proof set.

Other than that I have nothing but good things to say. I love Interpol, just as much as I did when I first heard them, and El Pintor has shown me that they’ve still got what I want with their current line-up. Plus, I did get to hear songs I never thought I’d hear so I’ll take that. The first half and a bit of the set seemed perfect, without any issues that I noticed, even on the new songs they played earlier in the evening. I hate to taint anyone’s thoughts; Interpol puts on an amazing show and has such a good thing when you put each individuals’ sound together to make a whole song. I’d recommend that anyone see Interpol live; the good far outweighed any bad and I did not leave