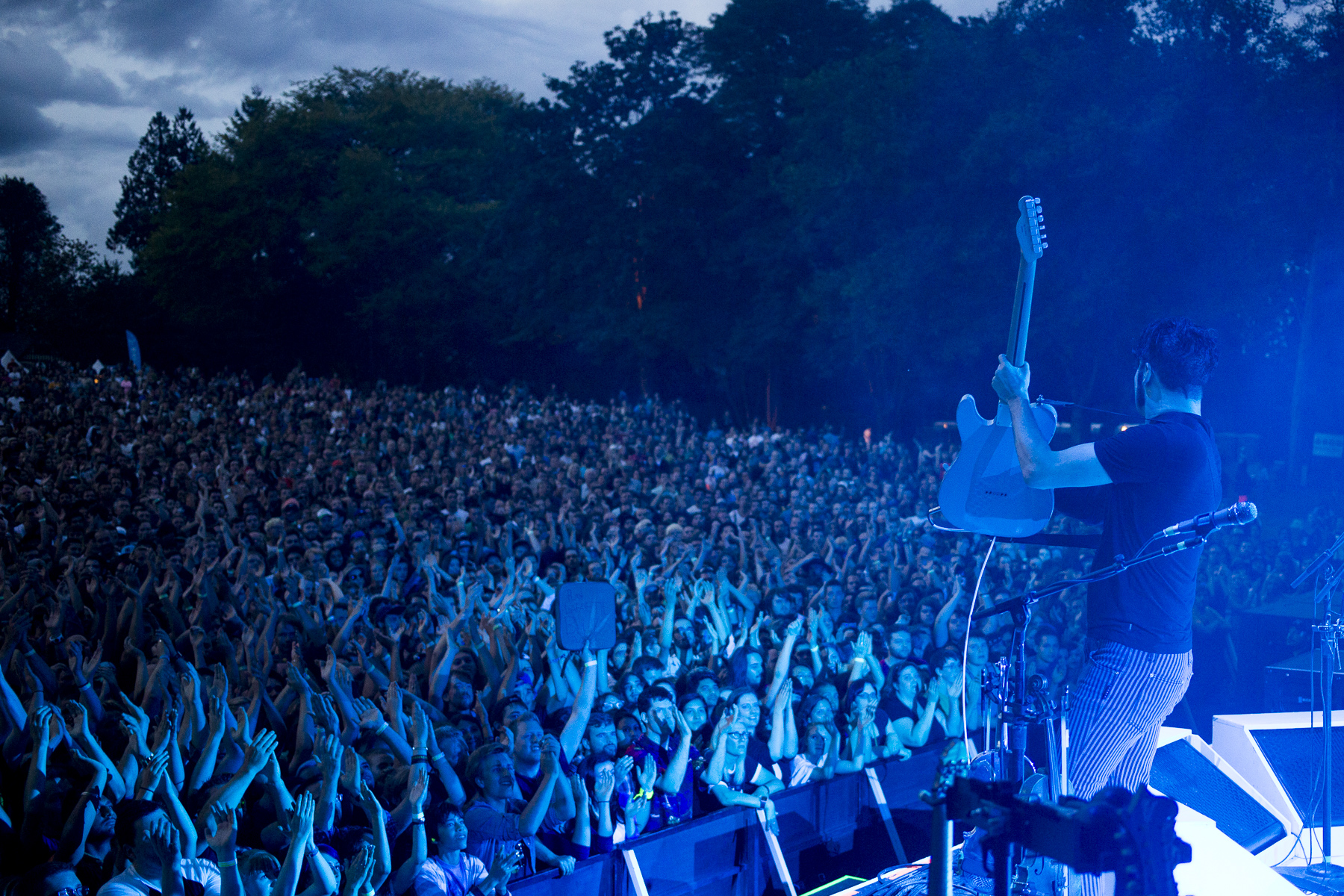 I walked into Deer Lake Park last night with an excited anticipation.

In a few short hours I knew I would see Mr. Jack White, perform.

First on the docket was the merchandise booth, to check out the venue-specific, date-specific poster. At that point I had been to many shows featuring Mr. White in some form, be it The White Stripes, The Dead Weather, The Raconteurs or his solo career. So I knew that everyone of his shows has a unique, limited poster, usually created by artist Rob Jones. Yesterday was no different. I managed to grab one of these beautiful prints.

From there, it was down the grassy hill to take up residence in front of the stage.

After a little over an hour of standing and listening to my neighbours discuss the proper way to smuggle drugs past security, the opening act took to the stage.

We were graced with the thick, swinging blues of Curtis Harding. I was lost in the sound. The guitar pieces were deep and fuzzy, with an old-school American blues flavour. Curtis had this wonderful Sam-Cooke-esque voice which soothed the eager souls of those in attendance. I immediately jotted down his name for future playlist construction.

After Mr. Harding et crew vacated the stage, I was left to defend my territory near the front and center

The swarm of newly arriving music lovers pressing through the human mass in an attempt to achieve front-fence status increased as the sun disappeared behind the tree line.

A member of White’s team made a quick speech encouraging people to refrain from using their phones to document the evening. Swaying the audience in to seeing those phone-photo-takers for the pure concert-ruining villains that they are. His address was met with roars of approval.

A few moments later, without warning, Jack White stormed onto the stage with his touring team.

He muttered something into the mic, but I couldn’t make out what he said.

The instrumental track, High Ball Stepper off of the 2014’s Lazaretto started the night. Even though it was dotted with a few technical issues, Jack White was ferocious in its delivery.

It shook the mob around me awake, and we soon became a single, writhing mass of kinetic energy.

The first White Stripes cover of the night, Dead Leaves and the Dirty Ground off of their 2001 White Blood Cell release, claimed second song of the night. The set stormed on from there straight into Missing Pieces from 2012’s Blunderbuss.

It was a thing of beauty to watch Jack strut around that stage. It was even more of a pleasure to watch him interact with his band mates. He regularly would walk up to one of them and work the timing of his movements to their contribution. These were not hired guns, these were friends, and he made that clear.

Drummer Daru Jones brought everything to that stage. Often highlighting the end of songs with a powerful riff. Outside of White, he was the one drawing attention. He was a pleasure to watch.

I looked on as his arms flailed around in this sort of visual, emotional poetry. I was impressed.

Finishing out the pre-encore set was a cover of The Raconteur’s Steady, As She Goes from 2006’s Broken Boy Soldiers It was met with re-energizing of the horde.

I was in the middle of the pit, and I was enjoying every bit of the set, barely noticing that my clothing was soaked through with sweat, only some of which was mine.

For a brief moment I thought – “This is rock n’ roll”.

White and team filtered off stage.

The crowd stirred in anticipation. They started in on a Wayne’s World derived chant, the words rolling across the amphitheatre – “We’re not worthy”.

Through my journey of being tossed around in the pit, I had found myself right back where I started. I was front and center, with my hand on the holy fence.

Once again, Jack stormed on to the stage.

I noticed he was now bare foot, not sure if he had been the entire show, and I could see the bandage around his sprained ankle.

Up until that point I had forgotten that he had sprained his ankle a few days prior. He had been working around that stage the entire first act without so much as a wince of pain visible on his face.

They started back into the set with another White Stripes cover, Icky Thump off of 2007 album with the same name. It was met with adjulation and excitement. The pit area started to fire back up, and this time grew more volatile. It was delightful.

The song brought me back to the first time I had seen Mr. White live. Back in 2007, I saw him at that very same venue, performing as part of the Icky Thump tour with the captivating Meg White, as The White Stripes.

It caused me to compare the two shows, and see how much he had grown. He was no longer this somewhat-shy performer, that became overtaken by the musics power as it coursed through him. He was now this impressively grandiose front-man, that took the music by the reigns and tamed it to his will, but still maintaining this modest and very humble disposition.

As the encore pressed on it was clear that the lead’s damaged ankle was starting to cause him pain.

At one point, just before they started into the White Stripe’s Hello Operator, his fiddle player, Mae Rische, walked over and asked if he was okay. Jack just shook it off and kept going.

He didn’t stop, he wouldn’t stop. The show must go on

The second act finished up with a cover of the anthemic Seven Nation Army.

Despite his injury, Jack climbed up on his front-stage speakers and led the cadets before him through a sing song.

This man was tenacious, he was unrelenting, he was the definition of dedicated.

The rapturous screams of the crowd, brought a smile to Whites face.

He stepped back to the mic, and graciously thanked everyone in attendance. He then apologized that they had to leave, as they didn’t want to.

I realized that they probably had to leave due to the 10pm curfew of the venue. Which was only 12 minutes away.

As Jack et all faded into the darkness behind the stage, so did the concert goers and I fade into the blackness of the night beyond the venue lights.

I remembered all this, as the breeze flowed through the car and cooled my sweat-drenched shirt as it chilled my body.

Until next time Mr. White.