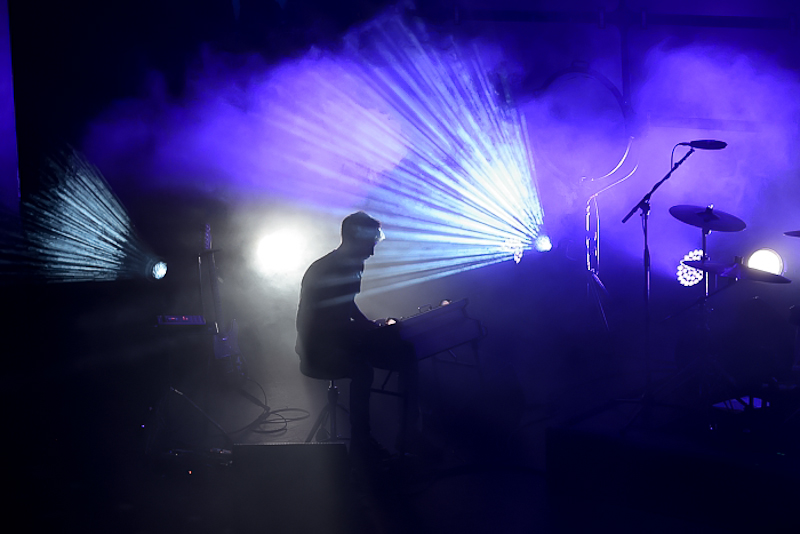 I had preconceived notions of what James Blake’s show was going to be like. I have been following the modern crooner for the last few years since his incendiary rise with his self-titled, full-length debut. Over the years, he’s developed, changed, progressed; whatever word you choose, it’s hard to not choose something that implies he’s better because of it. Each EP between his first album and his latest, Retrograde, teased listeners with tantalizing new techniques that would surely elevate his music to another level. Yet, somehow when Retrograde came out, it was a bit of a shock. Take a Fall for Me featured RZA in an effective manner; Digital Lion was chaotic and beautiful; each track showcased a new aspect of Blake’s talent. To be quite honest, it feels like an infinite Russian nesting doll at this point with a whole new musician at each level.

But he’s kept all that made him special throughout all of this, never losing grasp of who he is and what made him jump into the spotlight so soon. Immense talent like his is raw and only someone with his ingenuity can refine it to a point where it’s the product we listen to and admire. But, as always with electronic based music, the issue was how it would translate to the stage.

Opening act Jason Chung (AKA Nosaj Thing) was very promising. The Los Angeles based producer showcased an eclectic mix of his tracks showing off his dexterity and form. With precision and impeccable timing, Chung cued swells, percussion, and infinitely more complex aspects making for a perfect exhibition of musical skills. Unconventional beats were blended seamlessly, each one topping the next in challenging the norm. It was as if he was filling circle holes with square pegs all the while making it feel right. At every moment he pulled out something I never would’ve expected and it somehow worked. It walked the dangerous line of being too daring teetering as close as possible to the edge only to pull himself back every time. Only taking a break once, the songs flowed into one another making time slip by. His 40 odd minute set past by so quickly in what was one of my most enjoyable live experiences this year. Though unassuming and stoic, he succeeded in bringing his unique style of music to a live environment and was well worth the price of admission by himself.

Then of course James Blake had to top that in every single way. He started with I Never Learnt to Share and though his vocal loop was spoiled by cheering (a reoccurring problem throughout the show), it was the ideal song to slowly bring everyone into the chaos of lights and sounds that was to follow. Just as Nosaj Thing topped every last moment with the next, so did Blake. The songs were mostly executed without hitches with phenomenal audio and beautifully done lighting. The Vogue’s stage was lined with strobes, spotlights, and various other devices all complimenting the tone perfectly. In between a few songs Blake took time to thank the crowd for coming and made a bit of small talk, and it was in these moments when his boyish smirk came on his face that made him so genuine that truly made the show special.

Each song was a spectacle in its own right. As aforementioned, the loops including crowd applause did break the immersion at times and soured the performance of Retrograde, one of my most highly anticipated tracks, but those seem so insignificant in hindsight. It was in the “in betweens” when Blake was human and light hearted that reminded me of just how normal musicians can be, and I love it. This tall, youthful man seems so average but exhibited just how genius he is in terms of production, writing, and composing. He has awards and is widely recognized for his albums, yet in the end he still puts on an intimate show that somehow impeccably intertwines with an incredible visual show. If not for those few audio hitches in the loop recordings, I would not have a single complaint for the night.

This wasn’t just a professional doing his job. James Blake put his passion and talent forward for a memorable night where his songs came alive in a way I never would have hoped for. My fear that the show might be lifeless and boring was instantly muted after just one chaotic and blissful song. It broke down that apprehension that maybe, just maybe, the night wouldn’t meet my expectations. Instead, every single hope I had was exceeded far beyond what I thought possible.

In the end, the concert was one of my top shows not just of this year, but of all time. Of all the high production, intimate, whatever shows I’ve seen, this one managed to top so many of them in various different aspects. This is a musician who is still yet to hit his prime and he’s currently in that perfect limbo where the shows aren’t too big or too small. So if the opportunity arises, go out there, challenge your notions if you have any, and be ready for an absolute treat of a concert. These are the shows I yearn for, that I wish every single one could be, but so many seem to misfire on one aspect that holds them back. This was one of the few nights that got so close to that seemingly unattainable perfection. Now, well now I have the immense pleasure of remembering it and anticipating whatever Blake does next.

Just two brief side notes: First, someone got on stage during one of his first few songs. I understand you want to get close to your favourite musician, but you’re going to get thrown out and miss the rest of the show. I just don’t get that logic. Second, it’s 2013. How the hell haven’t people figured out to turn off the flash on their camera? It’s extremely distracting for me as an audience member. I can’t imagine what it would be like for the musician.