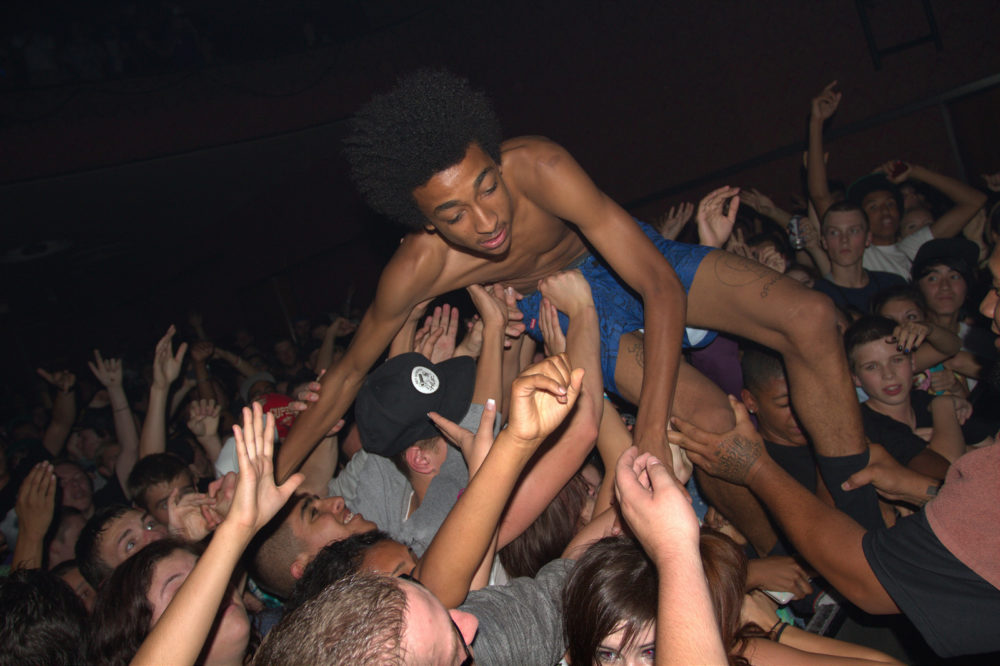 A crowd of cuts and bruises bled out onto the streets; that small pocket of closeted anarchy subsided; cathartic equilibrium resided for a moment and then aggression took a break. Odd Future had just recently ended their set.

Just over four hours before that, I arrived to an overflow of dedicated fans. The line bulged and protruded onto the street barely fitting along Granville, overflowing onto Smithe. The eager excite was present as a palpable murmur, perpetually pulsing into a mesmerizing cornucopia of audible anticipation. Some even boasted about past experiences, many donned OFWGKTA labelled clothing, and each person, no matter their origin, was taking part in the controversial revolution taking over the world.

Odd Future is no longer just a hip hop collective; they are a universal entity and phenomena. Fans clamor for merchandise and tickets, often paying high prices in order to show their support to the young public figures. Purchasing a shirt or going to a show now means buying into the cultural identity of the rap group. To be a fan of the band meant being reckless and young, no matter your age.

Joining into the line, it was blatantly obvious the night was going to climax with a confined chaos. Whether it was some white kid grown in a gated suburbia or someone less privileged, Odd Future spoke to the innate reckless nature and need to lash out in every being. Songs that boast a rape culture, drug usage, and breaking rules were their medication, their ability to feel that burgeoning youth inside wanting to lash out without consequence. There’s almost a calming catharsis to the music despite being so gregarious.

The doors opened around 8:15 and the growing crowd flooded in through the doors with security doing a more thorough check than usual. If one so chose, they could, and many did, spend $35 on a shirt to commemorate the evening or perhaps display their allegiances and fandom. The floor area filled up quickly and the upper deck had a more moderate growth.

It was around 9:30, surprisingly on time, that the DJ for the evening, Taco, came on stage to pump up the crowd. After doing so for roughly 20 minutes, Domo Genesis and Hodgy Beats came onto the stage, later joined by Mike G and arguably the most iconic and revered member, Tyler the Creator. Each member brought an unmatched energy to the stage. Going through songs from the mixtapes and side projects, there was always at least one member owning the room with their pulsing stage presence. Spastic flailing, flips, and crowd dives energized everyone in the room and as the crowd fed on every action, it managed to expand even greater than before.

The security definitely had the work cut out for them that evening as the reckless rowdiness of the crowd was greater than I have ever seen it. Multiple crowd surfers, excessively drunk people, and pot smokers had to be escorted out or away from the stage. Of course, such actions were expected in the presence of such figures of anarchy and rebellion.

But despite being one of the strongest shows I’ve seen energy wise, I couldn’t help but be slightly disappointed by the overall presentation. Though catalog staples were performed almost impeccably, often the sound levels were off and many of the rappers got drowned out by an overbearingly loud Domo Genesis. It got worked out through the show so the latter half improved in almost every way, but it was kind of disappointing to have the twisted, sadistic eloquence of the members drowned out into an intelligible mumble. The sick intellect of the band kind of turned into a droning mess of words all unanimously mashed together.

The reality, however, is that the show was memorable for the right reasons. When I look back to the how, I’ll be clinging onto memories of Hodgy getting “high as fuck” on stage, Tyler being his rowdy self, Domo complaining about a stolen sock and Taco being likable with a more quiet energy and presence. I’ll forget about the sound quality in the coming days, but being in the crowd for the shoving, jumping, rambunctious mass for one of the most anticipated shows of the year will stick with me. Odd Future proved they’re more than just an influence in the rap game, but on culture as a whole.