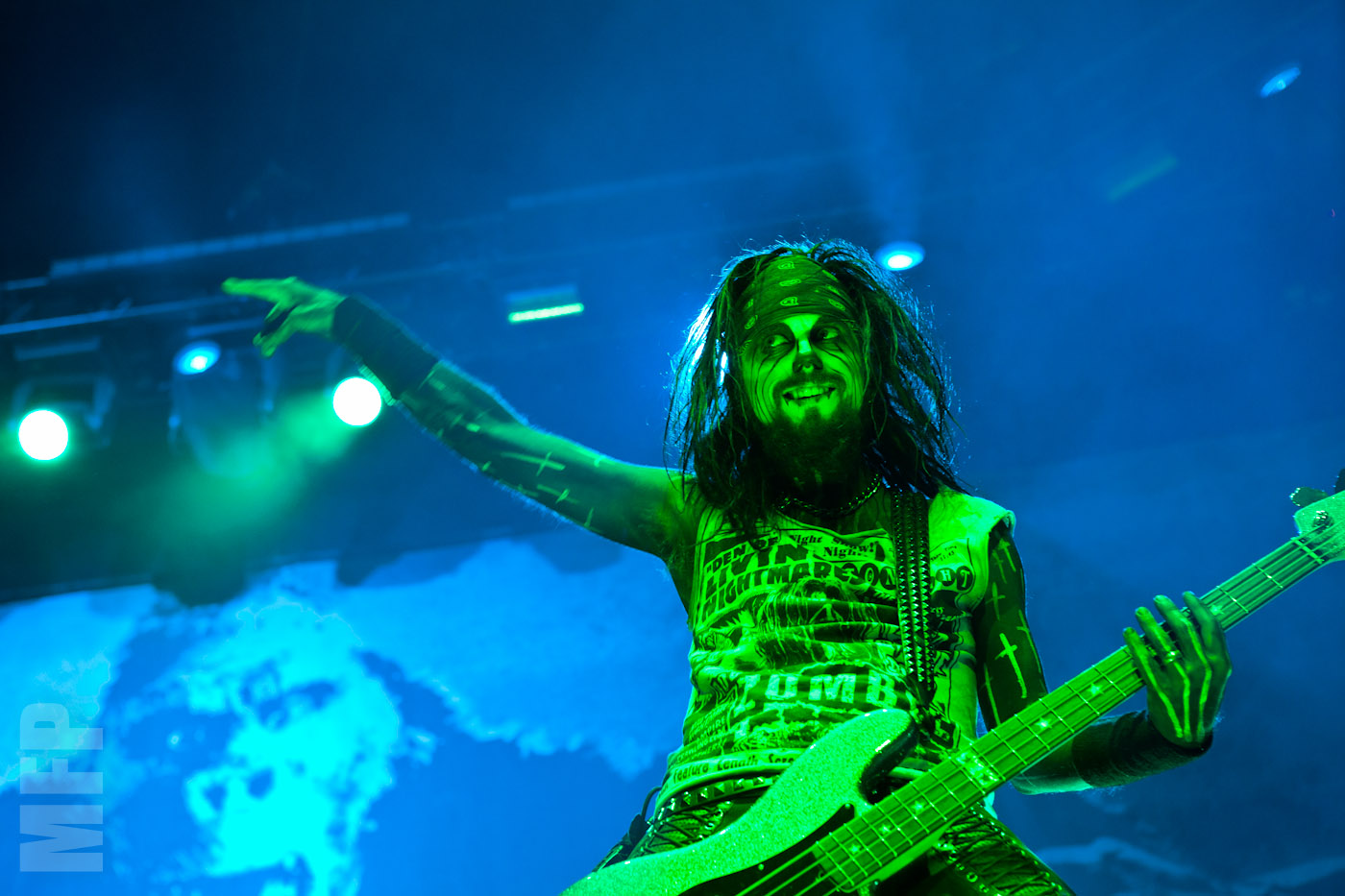 I’m a masochist, by that I mean driving from Seattle to the White River Amphitheatre in Auburn two Fridays in a row. It’s in the middle of a dense forest and the only way in and out is a two lane highway, so horrible logistics. Enough of my bitching and on with the review.

Due to the traffic I entered the venue as Sons of Revelry was halfway through their second song and from what I caught they seemed to be in a solid groove. The crowd was sparse, but those who chose to watch the band were really into it.

Then I entered the Main Stage and Theory of a Deadman took the stage. I knew nothing about this band , but they brought composure and a well oiled performance to the stage. Their sound is one you can hear on many hard rock radio stations throughout the country. The crowd was really into them and the band seemed really into the crowd as well. On a side note I was going through my photos on my camera during Rob Zombie’s set and Theory of a Deadman’s frontman Tyler Connelly was peaking over my shoulder at them, even pointing to one and giving it a thumbs up.

Over on the second stage Escape the Fate was tearing into an energetic set, which was eaten up by the people in the front row. The band brought everything in their arsenal to the smaller second stage, jumping and running around the entire set. They are easily on their way to the Main Stage next time.

And then it was back to the large stage for the highlight of the night: Rob Motherfucking Zombie!

Halloween is an important day to me personally and I’ve always used it as a reason to watch horror movies for the two months leading up to it so what better way to start of those festivities than with Mr. Zombie and company. There’s Piggy D who is all over the stage, playing with an intensity and energy of a teenager, John 5 the guitar madman with a gaze that will stare right through you and what can only be described as a serial killer behind a drum set, Ginger Fish, who had a creepy smile on his face the entire show. The stage was stripped down this time, gone were the giant props and video screens, in their place were banners of classic movie monsters. This version proves that all Rob Zombie needs is a stage and a crowd and a party will be had. They started with their cover of Grand Funk Railroad’s “We’re an American Band” and went on a journey through the staples that one would expect froma festivals performance, “Living Dead Girl”, “Dragula” and the White Zombie Classic “More Human than Human”. They took a welcome detour into “House of 1,000 Corpses” Territory and even threw in a cover “Blitzkrieg Bop” by the Ramones.
Then New Medicine took the stage and brought the energy to a smaller crowd, since most people were off getting beer, waiting in giant restroom lines or holding their spot on the lawn from Godsmack.

Godsmack played on the main stage, to an eager crowd who were more than happy to receive them. They ran through “Generation Day”, “Cryin’ Like a Bitch” and “Locked and Loaded”. Frontman Sulley Erna played with the most energy, roaring through every scream and yell. The impressive light show dancing around them. The show was being streamed live for Yahoo Screen so photo pit was stuffed, since we were only allowed to cover stage left.

Overall the festival was a success with the major highlight of the night being Rob Zombie.

For a full gallery of Pain In The Grass, click here.