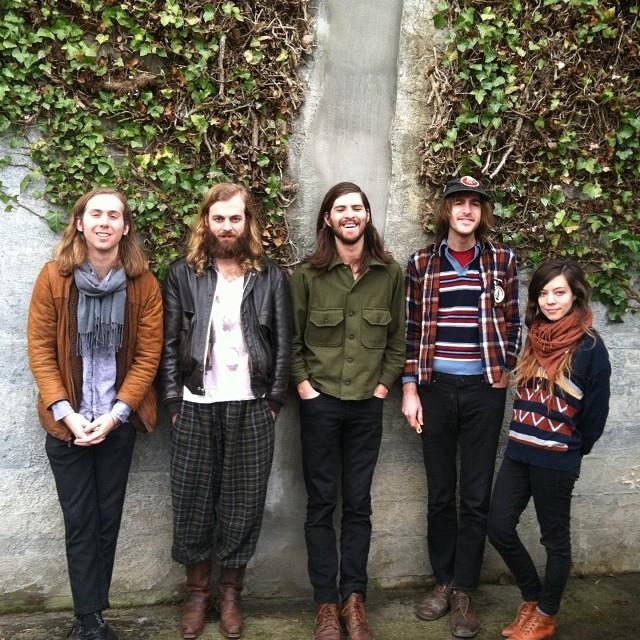 Hailing from Boston, Massachusetts, Quilt is a four piece psychedelic band with a lush, gentle but steady pop sound. With their open chords, shared group vocals and unexpected tempo changes, Quilt’s show at the Media Club was an intimate performance which provided some sunshine on an otherwise rainy February evening. Playing to small but enthusiastic audience, the jangly harmonies and effective rhythm section were encouraging of both dancing and day dreaming.

Bearing resemblance to more than a few influential sixties acts such as the Band, the Zombies and the Moody Blues, Quilt sound as if they were from the west coast, as their sound is indicative of folk rock acts like Buffalo Springfield and Love. Seldom can contemporary groups create a style that is as individual and throw back; although Quilt sound reminiscent of another time and place, it is a sound that is similar but has never quite been attempted. Many contemporary bands have reduced their art to power chord based blues rock and since the recent rise of the two-piece band, Quilt’s direction could be described as divergent. The result is refreshing; a four member group in which all of the members have strong input in their craft. Switching back between the airy vocals of Anna Fox Rochinski and the three male members of the band gave off a feeling of togetherness that was all the more palpable in such a small and intimate venue. The band themselves spoke casually with the crowd about their love of Canadian musicians such as The Band and joked about the size of the Arena down the street.

On songs like their new single “Arctic Shark,” Quilt’s style flirts with an airy, floating, and ambient vibe. The warm and spaciousness sound is anchored by a steady, grooving drum and bass. Lead guitar injects are colourful, sporadic and not over utilized. Most modern musicians lack the communal writing spirit; the chemistry of these four members is both impressive and endearing. Promoting their sophomore album on the Mexican Summer label, Quilt’s set drew heavily from Held In Splendor. An evolution of their first record, Splendor continues to define Quilt’s aesthetic as a gentle pop outfit with a touch of confusion. By choosing to evade conventional song structures and aesthetics, Quilt both recalls the dreamy, west coast style folk rock of the 60s yet modernizes the style by adding a danceable groove. Breaking into the highly characteristic tune”Cowboys In the Void,” Quilt delivered a powerful and memorable performance using their signature gang vocals and lush arrangements. Sometimes augmented with a vintage organ set Quilt’s atmosphere was reminiscent of the Black Angels, albeit with a much more positive tone. Surpassing expectations and delivering quality well in excess of the ten dollar door charge, Quilt play a patchwork of cherished classic styles bonded in a seemingly effortless fashion. Performing to a small but enthusiastic crowd at The Media club, Quilt played without a care in the world and frequently thanked the audience for their presence on such a dreary February night. For either a picnic on a sunny day or a dreary, rain soaked night, don’t forget your Quilt.