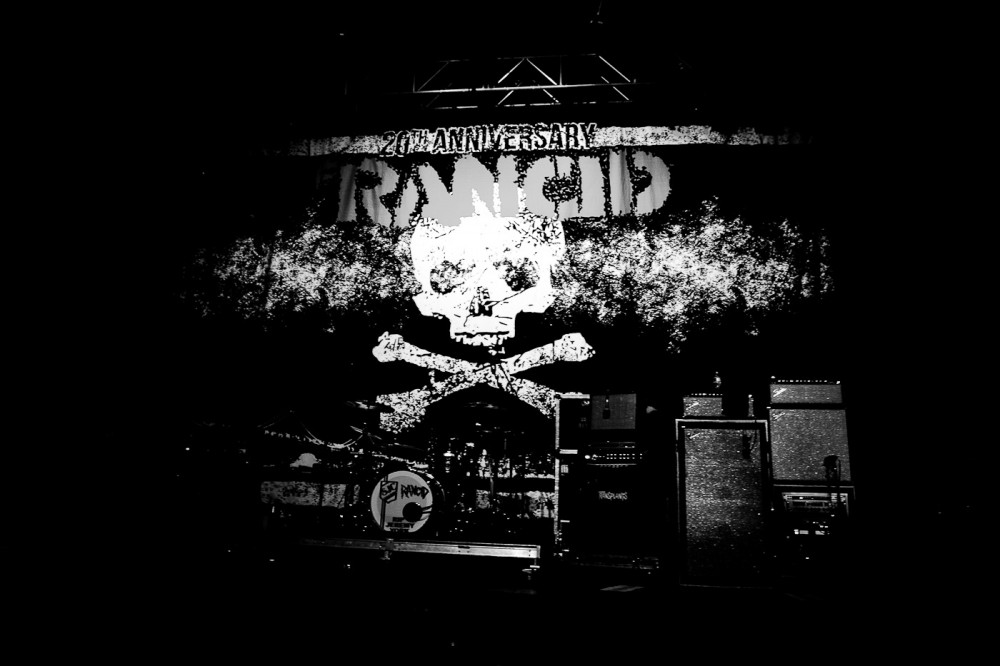 The Fox Theater in Pomona, CA may seem like an odd venue for a Punk show at first. It’s art deco aesthetic and retro charm, position it as the antithesis of what the average person pictures when the word punk is mentioned. Yet, when you consider that the band headlining was none other than Punk legends Rancid, the historic venue seemed to fit perfectly.

First up was Los Angeles based Toughskins, who brought their brand of Street Punk to the stage. They are a boots and braces kind of band. A working class mentality ran throughout their performance. No frills just music and anthems for fans of bands such as Cock Sparrer and Street Dogs. They had a decent sized circle pit going, which is the ultimate sign of audience approval for an opening band at a Punk show. If Punk with a touch of Oi is your taste you should check out Toughskins.

And then the family vibe of the night started. Up next was the Transplants, which is the Reggase, Rap, Punk side project of Tim Armstrong and Travis Barker, of Blink-182 fame. I say family vibe because Skinhead Rob, the main vocalist, was a roadie for Rancid before Tim started Transplants with him. Rob also performed guest vocals for “Red Hot Moon” on Rancid’s Indestructible. The band played like the night was theirs and the audience reacted as if they were the headliners, bodies were flying and people danced the whole time. They played a set that flowed between all of their influences, even finding time to cover “Do They Owe Us a Living”, my personal favorite song by Crass. This was my first time seeing Travis Barker play live and I was blown away by his skill and intensity behind the drum kit. I heard he destroyed his snare drum at the Hollywood show the night before. Matt Freeman joined them to play “Diamonds and Guns”, yes the song from the hair commercial. They closed the set with “Tall Cans in the Air” and since Pabst Blue Ribbon is a staple at Punk shows, the venue was filled with just that.

Last but not least, Rancid, who took the stage with a confidence that they have earned and cultivated over the last 21 years. They opened with “Roots Radical”, “Journey to the End of the East Bay” and “Maxwell Murder”. Tim Armstrong ran around the stage, flinging his guitar around like it’s a child’s toy, with the energy of a much younger man for both sets. The setlist consisted of at least one song from each album, but was heavily concentrated on …And Out Come the Wolves and Let’s Go. They played all of the songs you would expect to hear at a Rancid show. Skinhead Rob even came back out during “Red Hot Moon” to contribute his part from the recorded version. One the interesting aspects of seeing a band who has been around as long as Rancid is that it becomes a family event of sorts. You are almost guaranteed to see at least two little boys with mohawks. There was even a father-daughter dance going on next to me during “Red Hot Moon”. The only thing that was missing, that I have seen them do in the past, was an Operation Ivy cover or two. This is of course a personal complaint and cannot be used against the energetic and fun that Rancid put on at The Fox Theater. If you live anywhere near one of the stops left on the tour and it’s not sold out, get tickets and go!