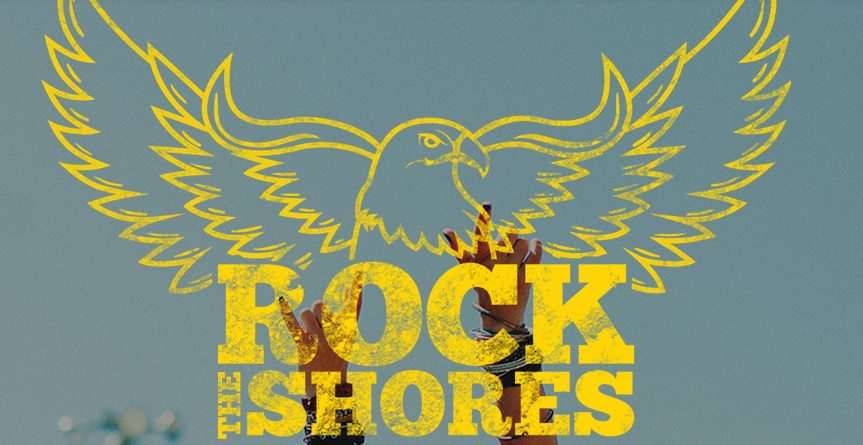 Expanding into a three day event, the 2014 Rock The Shores festival consisted of a varied spectrum of rockers. Ranging from the classic Canadian alternative sounds of 90s heavy weights Our Lady Peace, the catchy rock and ponderous lyrics of Sloan or the indie laden hooks of Mother Mother, Rock the Shores showcases a variety of old favourites, new buzz bands or national acts all share a similar Rock and Roll drive.

Situated on the picturesque Juan De Fuca Recreation center field, lined by mighty evergreen trees, the outdoor nature of the festival distinguishes the concert experience from the normal concrete rock and roll venues. Concert goers of all varieties, ranging from veteran rock and rollers to young families composed the enthusiastic audience. Recently changed liquor ordinances allowed this year’s festival to avoid inconvenient beer gardens. A dry-only family oriented section of the grounds was virtually empty. The beer drinking occurred without incident, although within sight of a heavy and imposing Police presence. The beaming sun from the cloudless sky inspired many concert goers to sport their most festival clothing, bodies proudly displaying tattoos. The three days of music served as a welcome vacation for over 10,000 fans from Victoria, Colwood and Southern Vancouver Island.

Rock The Shores caters both to nostalgic favourites as well as exciting up and coming bands. Friday’s performances included Bright Light Social Hour, from Austin, Texas, who weave a thick and inciting brand of western blues with notably tasteful instrumentation. Gord Downie, vocalist of Tragically Hip fame, performed with backing from Toronto rockabillies The Sadies, a group long favoured by notable artists such as Blue Rodeo and Neko Case. Gord Downie’s manic vocal imprints particularly shone as he told the audience “if you have ghosts, you have everything” as he launched into an incendiary cover of legendary Texas psych rocker Roky Erickson.

Many of the festival’s artists were tried and true Victoria favourites. Local boys Current Swell were lauded by their family and friends. Toronto urban pop rockers USS delighted the crowd with their lively stage antics and crowd surfing. Tom Cochrane’s easy going rock set delighted old-time fans with his charismatic friendliness and put to rest the skepticism of many newer, unfamiliar viewers.

Enigmatic and unapologetic, the Cult‘s Ian Astbury was a particular treat. The musical influence of the former front man and replacement singer for The Doors of the 20th Century, Ian Astbury’s cultural impact is just being realized by a new generation of fans. Reanimating their classic singles like “Rain” and “She Sells Sanctuary,” in heavy acid washed tones, the Cult were a distinct and compelling addition to the festival lineup.

Standing out as the most unusual and atmospheric of all the acts at the festival, New Zealand based the Naked and Famous provided an airy set, bearing resemblance to the electro pop of LCD Soundsystem. Saturday headliners Billy Talent riled the crowd to an explosive frenzy; a heavy proportion of the crowd would lip sync their entire set.

Attendants found a familiar groove by the final day of the festival. July Talk captured the imagination and interest of the early afternoon crowds before South Africans Kongos took to the stage. Mother Mother, routine visitors to musical festivals on the island, have shown continued growth in their audience and stage show; the frenzied nature of the crowd combined with the frequency of crowd surfing confirmed the wealth of motherly love in Victoria. Alternative 90s rockers Our Lady Peace played a set with material from across their lengthy career, and closed the festival with a many favourite songs from Clumsy, Maybe Happiness Is Not A Fish That You Can Catch and Spiritual Machine.

The range of performances serve as an example of a particular musical taste in Victoria. The unique directions of airplay on local radio stations like the Zone 91.3 and 100.3 the Q have played pivotal attention to up and coming artists, who never forget the musical encouragement so early in their career. Between the up and coming protégées, beautiful outdoor venue, and distinguished rock and roll acts, Rock The Shores is Victoria’s biggest and loudest rock Festival and is still making waves.