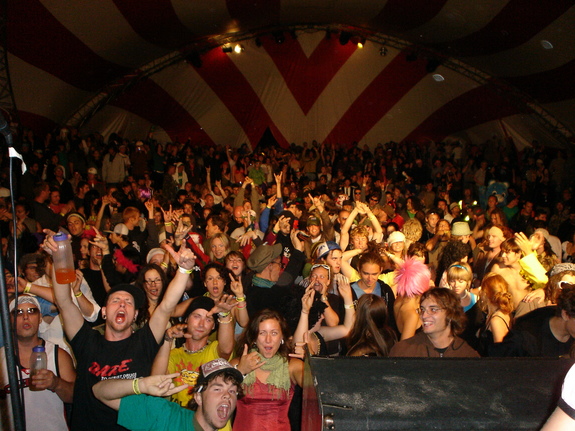 There is a certain acoustic to the magic that delights Salmo River Ranch from August 8th to 12th. A magic encouraged by fairy lights twinkling in trees, lanterns whirled by winds, and wild creatures roaming the forest and beach. These creatures may be engineers, students, or nurses any other weekend, but at Shambhala they are the painted animals, masked pixies, gothic ballerinas, or whatever they found wandering within their imagination. They pour down the old logging road packing glitter, face paint, hula hoops, koi, and all sorts of other playthings. Shambhala is, after all, a gigantic playground. Despite it’s title as music festival, Shambhala gloriously stretches into an art festival with oversize cocktail umbrellas extending from a raised deck, the Kalidoact, a gong circle, fire shows, unique vendors, and six distinct stages; The Village, Living Room, Pagoda, Labyrinth, Nebula, Fractal Forest, and the Amphitheater.

Only two stages were open on Thursday which allowed for a slow wade into Shambhala’s river of constant sound and motion. This slow wade was remarkably similar to people’s entrance into the festival as well. Stories circulated throughout the campgrounds of eight hour waits when arriving for early entry on Wednesday. My wait was four hours on Thursday. Although the parking design allowed for no idling and was smoothly run, the process occurs with a field with temperatures of thirty-two degrees. Needless to say, my first experience at Shambhala was the river. The glorious glacier river accepting of nudity and much silliness.

This river cascades through the grounds, beginning at The Living Room stage and flowing past all tents and tarps. This watery addition to The Living Room stage adds to the intention of the stage design; to feel at home. To feel the comforting tranquility of seeing a river whilst reclining upon an easy chair. The Living Room stage appears to be inspired by a pirate ship, with black, white and red fabrics whistling in the wind and lounge space sneaking behind the back of the stage. This is where I saw my first show at Shambhala; Tight & Bright 80’s Dance Party with Val Kilmer & The New Coke. An original concept placed within a peculiar setting as Shambhala is mostly an electronic music festival. However, the five member band played all the eighties one hit wonders; ‘Whip It’, ‘Heart of Glass’, and ‘I Think We’re Alone Now’ inspiring joyful sing-a-longs.

Afterwards, Timothy Wisdom hit the Amphitheater with a goofy ghetto funk set. The duo began with a mic check rap where they threw out ear plugs and joked with the audience. Their incredible charisma created an easy friendship with the crowd. At one point, a trombone player came on stage while Wisdom free-styled, yet the free-styling lends itself more to an energetic poetry slam between two friends joking around, rather than two serious rappers engaging in freestyle. This lovely element to their performance explained why Timothy Wisdom performed the first night of Shambhala. It’s not because they are a lesser band given a less desirable early spot, it is because they are divine appetizer teasing the palate before a delectable multi course meal.

In a similar appetizer fashion, LongWalkShortDock took to the AMP stage at 1 am. LongWalkShortDock to Victoria residents is an institution; as almost everyone who now likes electronic music saw him first. This infectious love is caught through his live electronic music combining sounds from video games, heavy metal, drums, synths, and weird vocals. However, it is not the sound that is infectious, it is the performance of sound and sight. LWSD displays how crazy one should move to electronic music by whipping and throwing his body and hair around. The complete freedom of movement fueled by the sound breaks the chains of conventional club dancing and allows for rampant originality throughout the entirety of Shambhala.

On Friday, once again the day began with the river. To jump in a glacier river after awaking in a sweaty hammock is recommended to all. This awakening was followed by another at the Labyrinth’s opening ceremony. The ceremony urged connection between the earth and self and the intentions one should possess for the Shambhala experience; a spirituality, a kindness towards strangers, openness, and non-judgement. Featuring this type of act is what transcends Shambhala beyond a music festival. It is not a place just to rave, but a place to grow (with or without substances). One feels this incredible energy when placed in Shambhala’s downtown area, music can be heard and felt from all stages as costumed individuals scurry and dance around totem poles, an art gallery, and seemingly constant bubbles and giggles.

Friday marked the true beginning of Shambhala’s insanity with no music for only three hours of a day. Thus, it is very important to take naps and alter the day for action and night for sleeping mentality. The rambunctious delve into this altered perspective of starting your day at 8pm in preparation. Friday had this start at 10pm with Subvert at The Village and StickyBuds at Fractal Forest.

The Village is, undoubtedly, the rowdiest stage. Grimy heavy dub-step vibrates the campground from 1pm to 6am. This stage is a raver’s paradise; multiple platforms to jump around upon, catwalks for a breezy elevation, and a bumping 100,000 watt sound system. Wobbly rhythms grip one’s sternum and throttle as the crowd is whipped into a frenzy. Subvert was no exception, as one of the PK sound engineers and Village stage designer, one cannot expect anything but domination when he performs. This domination does not come through overwhelming focus on bass, but a crisp melody that tangoes with the deep bass sound; a dance between two seemingly opposing forces, yet a beautiful thing to hear.

Unfortunately, StickyBuds’ sound wafted over and demanded attention. The Fractal Forest stage poses difficulty in description. Large sunflowers loom above displaying beautiful visuals and patterns while large white tents have being modeled into pyramids and other structures. The visuals displayed constantly intelligently disperses crowds away from the DJ booth to all around the forest. StickyBuds sound compiling of ghetto funk, drum and bass, breaks, reggae, and mashup creates a universal beat for all to dance to. When his most popular track ‘Smoke the Weed’ played, smoky plumes were exhaled all around.

It was back to The Village for Gramatik at midnight, yet the performance was cancelled due to sickness. Thus, it fell to Datsik to comfort the disappointed crowd by shaking their souls with aggressive dubstep, and he succeeded. Datsik possesses the power of many other electronic music DJs; the power of reinvention of classic hip hop songs. The inclusion of raps and hip hop melds perfectly with Datsik’s wobbles. Everyone left The Village sweaty and exalted after his performance.

By 4:30 am, Downlink was upon The Village stage. Another B.C. Coast DJ emerging from the interior with a unique dubstep sound and embodies the weightiness to the sound. The sound heard through laptop speakers or an iPod dock compared to hearing it at The Village is like seeing a postcard of Mt. Everest or mounting the summit. Upon catwalk at the Village, a glance downward showed every single person was bopping about. No one was stagnant. This power contained at The Village is magical, as it refuses unhappiness through the outlet of extremely hard dancing and raving. Of course, it leaves you aching and sore and ready to crawl into your tent.