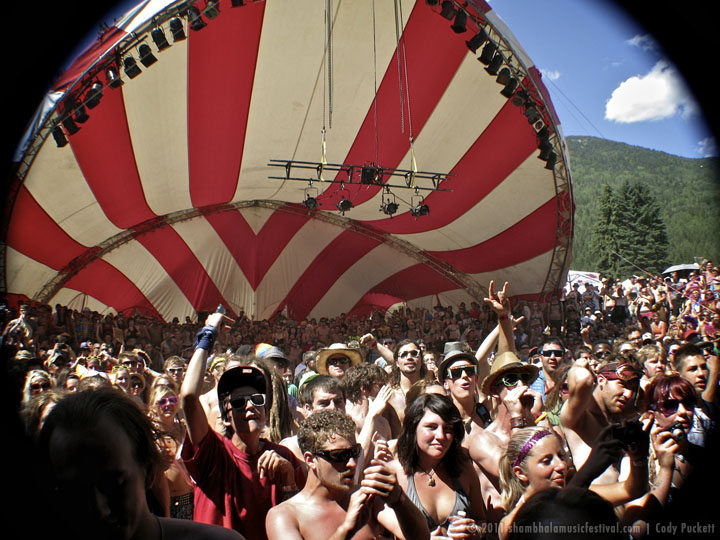 Saturday at Shambhala began at the river once again. The music from the Living Room trickled downstream and pleasantly teased the ears of what was to come at dusk. By 6:00pm, the day was ready to begin with Organic Mechanic. This DJ title perfectly captures the feeling of Shambhala’s acoustics. Organic beautiful landscapes coupled with mechanically produced sound. This juxtaposition pulls at the eyes and ears leading Shambhala to create an atmosphere for just listening, as well as dancing.

However, Organic Mechanic’s set was all dancing as the psychedelic glitch hop infused the hearts of the crowd in groovy tempos and sexy energy. The sound seems to surround each individual and sway one’s body accordingly. A focus upon Middle Eastern sound at Organic Mechanic’s set complete with hula hooping women and koi dancing men was like being a little child sneaking into a circus; viewing all that is unusual and unexplainable.

At 8:30 Neon Steve arrived in the Fractal Forest. Neon Steve’s first performance at Shambhala was incredible. By merging old school hip hop like Fat Man Scoop and Ludacris, Neon Steve allows that return to your high school and middle school selves. Paradoxically, Neon Steve’s ascension of sound throughout his set makes everyone get lower and lower while dancing. A Victoria Native, Neon Steve had a large fan base at Shambhala, especially during the remix of Edward Sharpe’s ‘Home’. This fusion depicts Neon Steve’s style as friendly and welcoming electronic music, which slowly draws you deeper into love.

Westerly performed before Truth at the Living Room stage setting the mood for low tempo dubstep. No remixes or sampling of popular songs, just a pure unadulterated sound. This set was similar to Organic Mechanic in the way it inspired a groovy accepting pulse to the air. The genre of dubstep lends itself out too often creating the perception of a bouquet of roses. Excision and Westerly are both given the dubstep label, yet the two sound completely different apart from an instrument absence. This generic labeling creates a misleading convolution and a different rhetoric is needed for electronic music labeling. However, Westerly’s soft and heady sound was perfectly placed before Truth.

Truth played an entirely original new set, complete with new dub plates; this means the sound was lifted from vinyl and re-looped and re-set to Truth’s own rhythms. The pair hail from New Zealand and utilize negative sound. By creating seemingly incomplete beats that hover within the air briefly, but then are completed with a lower and deeper sound. However, often this negative sound was castrated by friends backstage continually saying: “Give it up for Truth!”, or “This is Truth from New Zealand”. These over repeated sayings added an arrogance and perception that Truth mis-spun or mis-mixed leading the set to sound like a practice foul shot that bounces upon the rim and eventually falls into the basket, rather than a solid swish.

Afterwards, a journey to the Labyrinth was made. The Labyrinth focuses mainly on the psy-trance genre, which is a high frequency sound with quick tempos and a strung out style. The Labyrinth acknowledges this genre’s difficulty in finding a certain dance style by creating a small dance space, and a large space filled with interesting nooks and crannies. This space features giant puzzle piece frames, psychedelic mushroom art, various ponds and miniature water fountains, and best of all: giant nets suspended between trees to lay upon. This active listening quality allows for an oxymoron to develop between the high frequency sound and low energy listening.

Laughing Buddha performed at 1:30am and as we lay upon these suspended nets, we watched bodies blur in hysteric wildness. The sound seemingly sent the dancing crowd into a delirium of excitement, always quickening the flickering of their hands and wrists, the bouncing of the knees, and the whipping of the hair. Laughing Buddha, although not a DJ that many danced to, still captivated our ears while laying within the majestic Labyrinth.

Sunday began with Fractal Forest’s tribute to funky small town DJ’s. This community inspired act circulated similar sounds with similar intention; to get the audience to get groovy. It’s interesting to imagine funk baby being a adolescent in electronic music genre. It is quickly adopted and adapted by those wishing to alter it to their own designs, yet the sound never becomes corrupted. It constantly remains pure in it’s essential funkiness.

Adam Shaikh played his second set on Sunday at 4pm in the Living Room. This set was heard whilst lying upon a mattress and having my body painted. An experience that adequately sums up the Living Room experience. It is not just a stage like The Village to rage at, but a stage to relax and to enjoy listening without requiring movement. Shaikh’s set fused international sound created a Bollywood inspired set with inclusions of electric and bass guitars.

After the mandatory daytime nap; Funk Hunters took the Fractal Forest stage. The giant sunflowers were lit up with set choreographed visuals. At one point during their ‘Drinking in LA’ remix a kaleidoscope of pinks and greens was crystalizing together and everyone was transfixed by this. It is quite a site to see a crowd at an electronic music stop and stare. The Funk Hunters consistently remix the nineties favorite song to extend the amazing choruses and stretching the instrumentals to a trippy looping sound. A remix to ‘Shake the Room’ by Will Smith and Jazzy Jay is spun with bass that further melodizes the original beat. Of course, the ‘drop’ in dubstep is important and the Funk Hunters gather up all the energy prior this drop and throws it in the final decline of sound and bass.

The only experience at Pagoda, Shambhala’s ‘main stage’ was with Eats Everything at 12:30am. This set had infectious energy, yet this last day of Shambhala was met with exhaustion rather than enthusiasm. Everyone in the crowd was throwing the last reserve of energy into this set, yet their pupils were all dilated to the extreme. This trance, house, and bass compilation demanded energy present upon Friday or Saturday. However, Pagoda’s stage was incredible. A giant laser act cascaded through the festival’s sky all weekend and captivated attention at other stages. This lighting is part of Shambhala’s ascension to an art festival rather than just a music festival.

Shambhala’s music festival is exhausting for one who wished to remain sober. Upon arriving an acquaintance commented that I should not be worried about not enjoying myself due to neutrality to electronic music as Shambhala extended far beyond the music. This comment was true, as I did enjoy myself, but Shambhala is not for those who do not like electronic music or do not like drugs. As one experiencing sobriety, I felt as an outsider and that I was a negative in a positive space. In reality, I was simply sober in a very high place. This is not to say that the festival encourages drug use, but to say that the festival encourages freedom – in dress, in attitude, in spirit and in substance use.