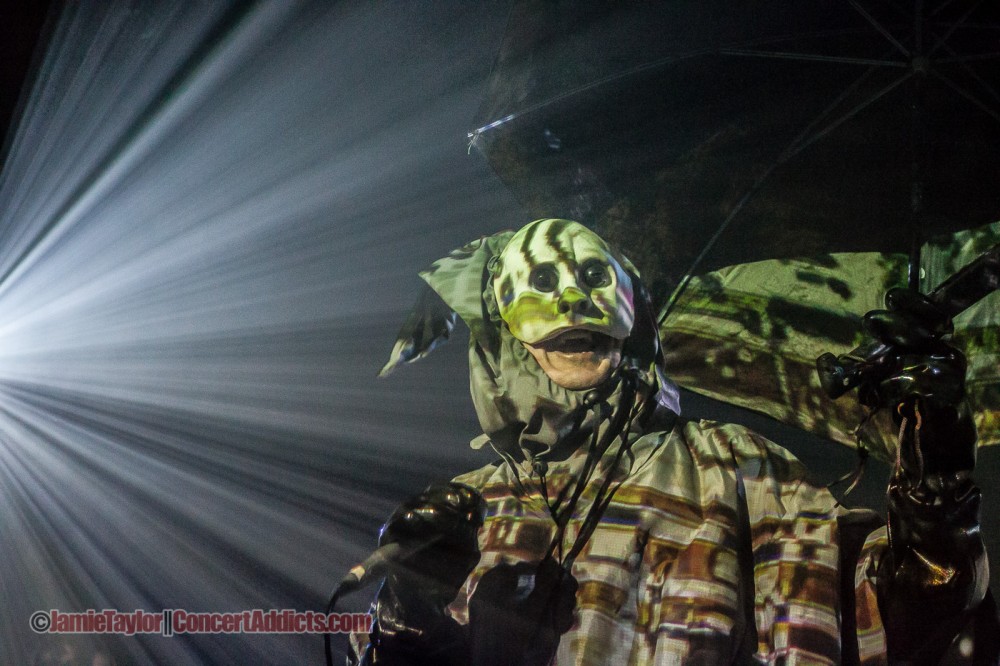 Isn’t it nice when a puppy finds its way home? Emerging from Vancouver in the mid 80s, Skinny Puppy made their mark with brutal yet sophisticated industrial music. Drawing inspiration from the everyday sicknesses of reality, Skinny Puppy construct a grimly powerful portrait of the modern world where the cuts and bruises of reality are emphasized rather than covered up. Debuting in 1984, Skinny Puppy produced a chain of highly progressive industrial and experimental music that would heavily influence artists from electronic guru Autechre to Trent Reznor of Nine Inch Nails. After numerous notable albums such as Bites, VIVIsectVI and Last Rights, the original line-up of Skinny Puppy disintegrated amoungst fatigue and addiction before releasing the 1996 album, The Process. Their most recent effort, 2013’s The Weapon continues an industrious string of output since the 2000 reunion of founding core members cEvin Key and Nivek Ogre. After hearing reports of their music being used to torture detainees in the American military prison at Guantanamo Bay military prison, Skinny Puppy used the experience as inspiration for their most recent album title. Additionally, the band sent an invoice to the American Government billing them for the use of their output as a weapon of torture. Consequently The Weapon is as thematic, driven and relevant as albums come and is a successful experiment in musical progression and social reflection.

While there is an inherent atmosphere of violence in the harsh sounds of their work, Skinny Puppy’s ugly mirror of truth appears more of a commentary rather than endorsement. Some of the band’s finest work focuses on gruesome and regrettable topics such as laboratory animal testing and biochemical warfare. Opening the set with vicious reference to nuclear fallout, cEvin Key stoically approached his keyboards and laptops as band technicians dressed in chemical protection suits and respirators adjusted the many cameras set onstage. Nivek Ogre approached the center of the stage, heavily costumed in a sinister looking hood and mask with deep, spooky black eyes. Twirling an umbrella with a florescent nuclear warning symbol, Ogre twirled a machete and sang his warnings of danger. Beginning with “Ilisit”, Skinny Puppy wasted no time impressing the fervent and sold out crowd at the Commodore Ballroom: “The Terror is the Suspect/ We’re the Receiver/ this is the Criminal Age;” Ogre’s distressing vocal observations feel as genuine and relevant as ever in the fast moving digital world. Screens set about the stage alternated between images of the drum kit, laptops, keyboards and manic antics of the masked and costumed vocalist Nivek Ogre. New output like “Wornin,’ “Salvo” and “Paragun,” retained the experimental legacy of Skinny Puppy and confidently dispel any notion any regulation of being a nostalgia act; the band shared much of its older material for the encore. The stage, adorned with savage looking projections of wasted industrial parks, faded machinery, sickness, pollution and decay, shows a total embrace of modern technology while retaining sensibilities for the baseness and grey of the industrial genre. A box-like looking cube on the center stage unfolded into a 6 paneled video screen. The blend of visuals, thick and twisted electronic tones, industrial beats and Ogre’s craze culminated in overload of stimuli. In the brutal mix of live percussion, thick and layered keyboard beats and Ogre’s screams, the influence upon many contemporary successful artists like Crystal Castles and Rammstein was palpable. Ogre & company returned to the stage for a unmasked (sporting a dull coloured pair of factory overalls, true to the industrial style) and delivered a ferocious encore. Cranking through some classic Puppy tunes, the band ended on a savage rendition of “Assimilate.” Standing with his head held high, Nivek Ogre projected a resolute confidence and pride in craft. “Rot and Assimilate/ So hot to Annihilate;” the militancy and rhythm of industrial clanging delighted the crowd.

Visually, sonically, and lyrically, Skinny Puppy remain heavyweights in style. The ever more popular electronic music has largely displaced conventional rock approaches; this blossoming genre was long ago fertilized by the industrial experimentation of Skinny Puppy. Ogre’s menacing onstage presence, from the brandishing of a machete, act of simulated self mutilation or mocked torture of a sickly looking dog statue, is a sight to behold. cEvin Key’s continued evolution as an electronic and industrial producer is equally compelling. Ever thankful for the longstanding support over past decades, Skinny Puppy thanked the sold out audience at the Commodore Ballroom. Given Skinny Puppy’s extensive and impressive portfolio of work, poignant imaginations and the enduring ugliness of reality, there appears ample territory for further exploration. As a wider audience gradually comes to appreciate and respect the brazen and progressive electronic industrial history that is Skinny Puppy, it is worth noting, that dog continues to snarl, kick, and viciously bite.

Army Of The Universe © Jamie Taylor