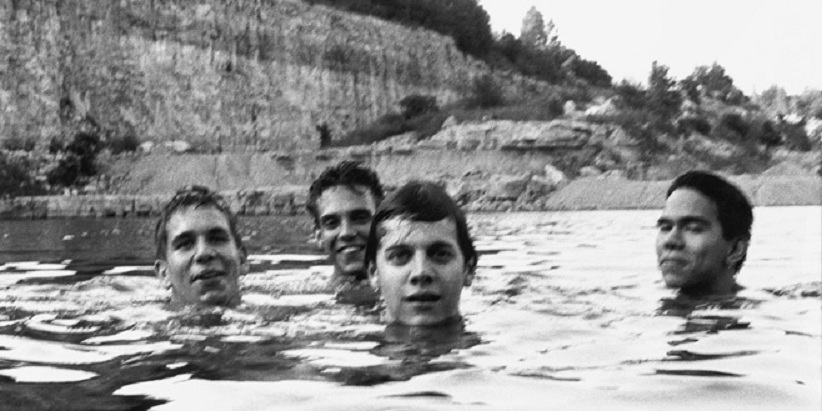 Under dim beams of light, Louisville math-rockers Slint performed their opus work Spiderland in its entirety. Supporting a deluxe vinyl reissue of their 1991 classic, Slint largely drew from the bleak, jagged and pondering album Spiderland. Recorded with the legendary all analogue production of fellow math rocker Steve Albini, Spiderland has continued to sell consistently, respected as a underground classic with irregular structures, jarring riffs and dark crescendos that continue to critically inspire modern post rock bands.

Slint unceremoniously stepped to the stage, took to their instruments and commenced the set with a gradual meandering instrumental, “For Dinner…” The lighting upon the stage beamed dimmer than usual; nonetheless after the first song drummer Britt Walford requested they be further turned down. The settled darkness provided a more suitable atmosphere for the sharp, irregular timing of the snare drum and the intentionally skewed guitar riffs. The healthy sized audience was captured early in the set, transfixed by the hypnotizing rhythms of “Breadcrumb Trail” and “Nosferatu Man.” The songs perfectly resemble their studio counterparts yet surpass them with the sonic range of live amplifiers and percussions. While atypical in musical structure, Slint heavily emphasize shifting from quiet to loud. Embracing minimalism, Slint’s bleak and restrained character, despite a surface appearance of simplicity, is composed of complex rhythms and expert restraint. Brian McMahan’s whispered, spoken word like vocals, Dave Pajo’s guitar perplexity and Britt Walford’s crisp drum work continuously interweave without ever sounding muddled. The dim, spooky imagery of Spiderland excels largely because of its limits.

Performing a few choice cuts from their debut record Tweez, the importance of the band’s instrumental songs was particularly apparent. These works had a heavy hand in shaping the direction of post rock groups like Mogwai and Godspeed You! Black Emperor. Each song played was executed with similar distinction; despite their modest initial reception, these songs have endured for over 20 years and have influenced legions of musicians.. Perfectionist in nature, Slint have not made any new recordings since their initial disbandment; their sole recent composition “King’s Approach” was not present on the set list. Dave Pajo’s spooky off kilter guitar scraps signalled the start of Slint’s masterpiece “Good Morning Captain.” The rickshaw’s audience, most of whom assumed they would never see this obscure Kentucky math rock band, cheered energetically and quickly quieted in respect for the sparse atmosphere of the gradually building opus. The drum’s prominence throughout the evening was formidable, but the crashing stops, agile fills and overpowering snare at the end of the set inspired awe. Snaking in structure, the crushing and rigid distortions rose and fell before reaching a pinnacle with a haunting vocal change from spoken word to a desperate scream, “I miss You”. Mysterious, thrilling and slightly terrifying, “Good Morning Captain” is a unique and perplexing treasure from its era and could be compared to other dark classics like Bauhaus’ “Bela Lugosi’s Dead.”

Returning after a brief walk offstage, the evening concluded with two more lengthy instrumentals, urgent and vicious in mood. Slint closed their set with the last track from their final studio release in 1994. “Rhoda” burned with intensity, Pajo’s guitar shrieking guitar attacked with trebled salvos.

The majority of Slint’s repertoire having been performed, McMahan politely thanked the audience for attending and quietly stepped back into the shadows: A fitting adieu to an evening of brooding intrigue.