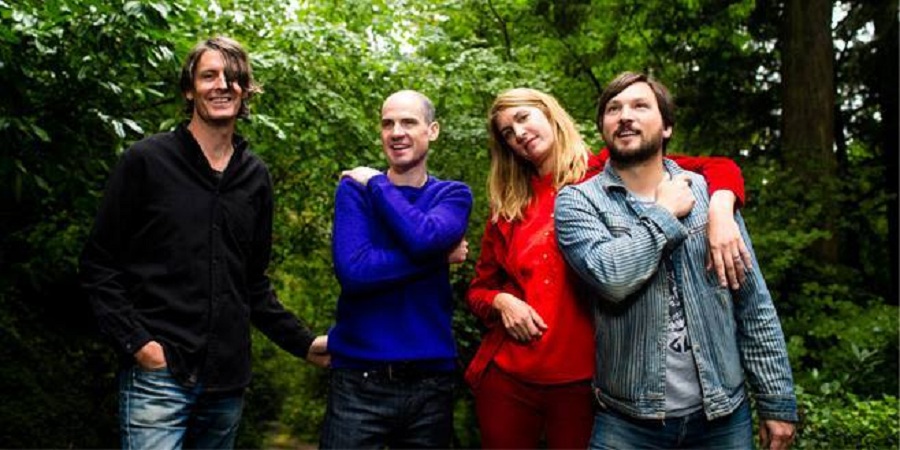 Performing the bulk of their new album effort, Wig Out at Jagbag’s, the Jicks opened into a barrage of buzzing guitars, surrealistic lyrics and wonderful pop hooks. Stephen Malkmus, Jick front man and former Pavement singer, has continued to develop his guitar skills in addition to his lyrical prowess. The Jicks are still rockin’ and rolling in their own quirky and wonderful ways.

Opening the evening were Speedy Ortiz out of Northampton, Massachusetts. The band has its own style cultivated through irregular guitar chord structures and ironic ninetiesque lyrics about day to day observations. Although some songs, like the excellent “Crazy Straw” sounded natural and adorable in a Rilo Kiley sort of way, a majority of Speedy Ortiz’s set was offset by their blistering volume which overpowered much of their musical intricacies.

The Jicks boarded the stage full of playful sarcasm and Malkmus proved most entertaining in his evening references to Rush, D.O.A. and learning French in school. “Bonjour Montreal!” Greeted Stephen Malkmus, “You know what that means cause they teach it to you in school!” The Jicks, a spastic and meandering pop band with a taste for bluesy jams, launched into a diverse set of new songs, back catalogue gems and hilariously spirited covers. Many of the new songs held a style similar to the 2011 Beck-produced album Mirror Traffic and were similarly bright, energetic and dreamy. The band played favourites like “Senator” and the lively lead guitar driven “Stick Figures In Love” but primarily drove home the new material. A fan’s appreciation of Stephen Malkmus often grows stronger with age as the personalities and lyrical individuality of his music resonates with time. Old cuts were conquered with playful ferocity; the Jicks are a band that enjoys themselves onstage and are always ready for improvisation. “Freeze the Saints” from Face the Truth was played as a duet with Malkmus on vocals and guitar and Mike Clark on piano. The striped down nature of the arrangement emphasized the wonky brilliance of the songs lyric’s “we meet again/ridding our divisible bodies.” The audience at the Rickshaw Theatre showed great respect and attention to the quieter number. The buzzing meandering rhythm of “Out of Reaches” from Real Emotion Trash served foundation for bright, sludgy blues solos that sounded all the more better following such fantastic lyrics: “They’ve got Omens that are Tailor made/For Every Situation that you’re conquering.”

The Jicks continued rocking through all the material in their Jagbag and ended the set with the closing song from the new record, “Surreal Teenagers.” Bouncing back to the stage, the band fired through a string of eclectic covers. The encore was entirely spent rocking out on cheesy favourites. With the main set down, the band started to really kick back and enjoy themselves. The Jicks began with a noisy, crashing pattern of guitar feedback that felt strangely wonderful and familiar as the bass line of “Stereo” took hold and the pit exploded with appreciation. “How about the voice of Getty Lee? How did it get so high I wonder if he speaks like an ordinary guy” Moshing is appreciation, right? Stephen spoke briefly of his love of Rush as Jicks drummer Jake Morris fired into a raging cover of “Fly By Night.” Morris is more than a suitable replacement for the formidable Janet Weiss, and actually sings a killer Getty Lee impression. The Jicks then cut loose with a playful run at “Mother of Pearl” by glam rockers Roxy Music.

“Vancouver, you are like Portland’s Neighbour……. I don’t mean that in a bad way” quipped Malkmus. The talent and jam prone tendencies of the band combined with Malkmus’ hilarious persona provided a memorable evening. The Jicks’ bluesy, sarcastic brand of quirky pop is rock solid and as hard as Pavement.