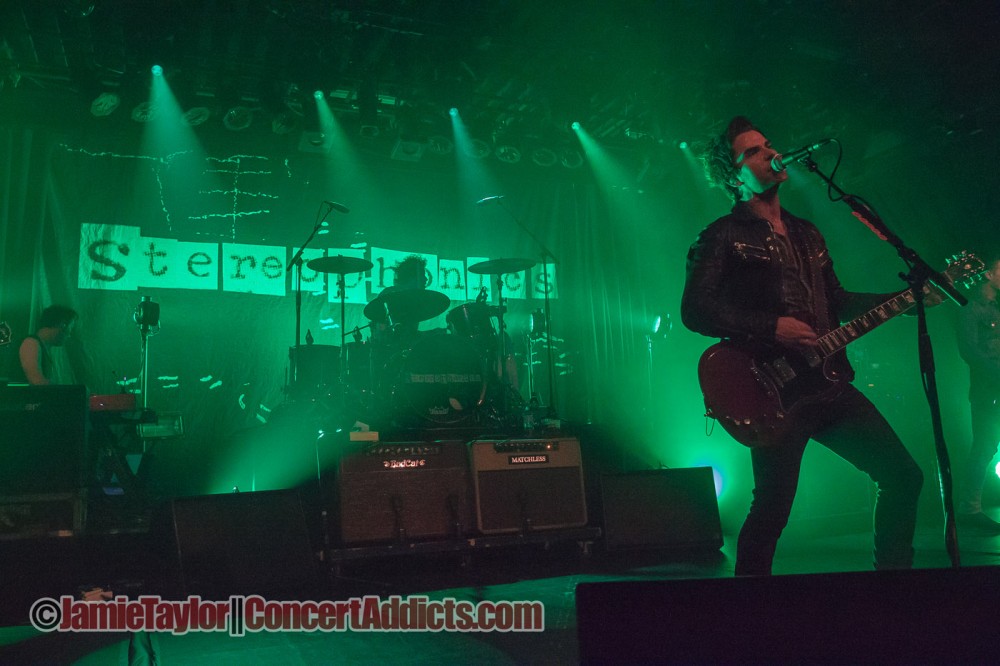 It looked to be a full house at The Commodore Ballroom on Sunday, October 6, 2013. The Wind +The Wave from Austin, Texas were on stage when I arrived just after 9 pm. They performed with two guitars, one acoustic and one electric, and what seemed to be pre-recorded percussion tracks, on this, their first visit to Vancouver. The female primary vocalist’s style did seem country-ish, but overall, if I had to put them in some kind of pigeonhole, after the 6 or so songs in their set, I’d place them in that wide-reaching genre of ‘indie folk’. They appreciated that so many people were already squished on the dance-floor and made repeat offers to interact with the audience at the merch stand. The band were also extended their thanks to Stereophonics for having them on their North American tour – and promised we would be hearing all the hits that evening. The Wind + The Wave currently have no new CD to promote, that one is being released in January of 2014, but the audience did offer decent applause, and there were even some whistles, after every song. All in all, I think this was not an unsuccessful night for this duo.

After half an hour of roadies and stage techs doing their thing, the Commodore was ready: when the lights went out at 1 minute to 10, minor pandemonium ensued and the Stereophonics were on – Catacomb, from their most recent CD Graffiti on the Train, started the night off as a solid rock ‘n’ roll number, right down to the light show. At first, I thought the vocals were up a bit too high, but they balanced out before too long. On the whole, I would’ve expected more jumping around, but then, I believe the new CD only came out in early September here in Canada, and I find that often happens when the new release is that new in a market. Regardless, right out of the gate, the Stereophonics set a great foundation for the rest of the night. The first of my favourite songs, Superman, followed and this time there was a proper response from the crowd starting with the first few chords. This is my first time seeing this band live in an interior setting (I saw them in Hyde Park for the Opening Ceremonies concert in London, 2012, but that was a festival stage and the endorphin levels were high) and I’m both pleased and impressed at how the vocals and instruments have the same quality as on the CDs I have – it shows consistency, it shows how little tinkering is done to make them sound ‘better’ during the recording/mixing/mastering process – they actually DO sound that good live; the only difference is, everything truly just gets amped up and this is when the tinkering happens: longer instrumental parts, big finishes, not to mention audience interaction – every element that makes a live experience meaningful is represented.

Right, we continued with A Thousand Trees, an audience favourite I should think because that lovely chorus was also sung full-voice by the people in attendance. There was a brief clapping part for them as well. It definitely seems like a short song, but the band rounded it out with a big instrumental finish and the Commodore responded with hoots, hollers, whistles, applause – yours truly included. Chief songwriter and singer Kelly Jones mentioned it was good to be back (later on he would mention the band had been coming to Vancouver for the last 16 years) between songs and extended his gratitude to the opening band for their support on the tour. The next song was the new CD’s title track Graffiti on the Train and I think I now understand why this song is on the CD: so they can perform it live. Jones puts in a great vocal performance and this really sad song comes alive in a way. It’s a mood piece, one of Tony Kirkham’s keyboard synthesisers provided the ‘strings’ as heard on the recording, wonderfully climactic cymbal crashes courtesy of Jamie Morrison and his amazingly expressive curly hair add drama, and I certainly won’t listen to it the same way again. I see a number of phone screens on as they record the song for their collections. Also from the new CD was We Share the Same Sun which began with a spotlight on Kelly Jones while the rest of the stage was awash with red. I found it had more of a rhythmic drive to it than what I’m familiar with and I’m loving that. This song in general is typical of this band’s rock style – anyone I’ve talked to about the band in recent weeks, this is the song I play for them as a kind of ‘audition piece’. If they like it, they’ll like the majority of the rest of the catalogue. No surprises, just a great song.

The first few rows of the audience did overhead claps for the duration of the intro to Indian Summer – I finally saw a Red Dragon, the Welsh flag, in the crowd. It’s not too high so I don’t think the band saw it, but it was good to see the one at least. What I saw a lot of during Have a nice day were cell phones – over a dozen recorded this oldie, but what a goodie. As soon as Jones mentioned that it was written in San Francisco, I (and a large part of the audience) knew what was next and the first notes confirmed it. It had a warm luscious sound that was only complimented by the lighting. For Vegas Two Times I absolutely adore that edgy rock guitar riff and live that alone sounds even edgier. I wouldn’t be surprised that this would be when newbies get surprised that there’s so much more to this band’s sound than Have a nice day and I think it’s perfect to have them back-to-back in the set. Vocals remain constant – solid, strong, never strained. How does he do that night after night? My point is pretty much proven right away as the band go straight from this into Mr Writer, another favourite of mine (yes, I have many) – a quasi-ballad with melodic oohs in the background and Jones’s hypnotic voice carrying you along. It’s not easy to knock a ballad out of the park, this band, this song – they certainly do for me.

In a Moment has a heavier guitar presence (2 electric guitars, 1 bass guitar, 1 acoustic guitar, so considering there are 5 people on stage, it’s all guitars and drums) and a great hook. This one was newer to my ears, but it rocked, through and through. Same Size Feet takes us to the debut album Word Gets Around from 1997, so, probably before my time, or so I thought, and then I heard the riff heading into the chorus and it’s on Decade in the Sun so I do know it. I’m a little amazed at how long this band’s music has been on the periphery of my music consciousness, but Decade is a brilliant 2-CD set of catch-up. ? Nothing Precious at all I didn’t know on any level. Nice piano part. At first blush, it’d be what I would consider a filler track on an album. I don’t think the audience felt much of a connection to it either. Not so for Maybe Tomorrow – I can hear the crowd sing the chorus. Adam Zindani is quietly confident, almost understated for the central guitar solo, and actually does spend it centre stage instead of stage right, but it gives me the sense of controlled tension, like it could go off somewhere else if it weren’t for the rest of the band grounding him. Meanwhile, on the other side, bassist Richard Jones does what so many bass players seem to be able to do in spades: ooze cool. The audience solos the chorus at the end and really does take it away home. Aaaah. Very satisfying.

Roll the Dice – on the new CD. I like the levels (full on and quick contrasted with slightly slower and quieter). Kelly Jones and Zindani appear to have a friendly guitar-off – rhythm guitar vs lead. Again, great vocal control enhanced by echo effect. Muse’s Matt Bellamy’s got nothing on this guy. Violins & Tambourines takes a bit to get going, you’re lulled into it almost to the point when you’ve given up on it and are waiting for it to peter out when all of a sudden it gets fast and loud and really good, even a bit thrashy by the end. Been Caught Cheating is quite bluesy with a keyboard synthesiser part that’s trying to emulate a Hammond organ. I read somewhere that this song may originally have been meant for the late Amy Winehouse. That would’ve been something, but in the hands of the composer, it’s got plenty of appeal.

To take us to the end of the set, the audience get a couple of familiar songs. Bad grammar aside, Just Looking is one of my favourite songs by Stereophonics and they deliver to a T, as with Local Boy in the Photograph – love it, love it, love it. So much singing, so much audience participation. With all the singing and cheering, I’ve actually given myself a headache and I still could have them go on for hours yet. Within two minutes of just that (cheering and such, not headaches), Kelly Jones returns to let the audience know that he hadn’t performed Caravan Holiday in a long time; he just started doing it again this week. It’s just him playing an acoustic guitar and singing. I see several lighters above people’s heads and it’s perfect like that. Jones (Kelly) then sits down at a piano keyboard that’s been placed downstage while I can see the band huddle in the shadows until it’s time for them to join in the innocuously titled I stopped to fill my car up that succeeds in finishing up as a full-on rock number. If the rhythm section wasn’t consistent throughout, one would think it continued into a new song, just an instrumental one, so let’s just say this was the extended version.

The Bartender & the Thief (which I tend to just call Gone Fishin’) continued the encore and, what could I possibly say at this point: It rocked? (yes) It was bouncy, blow the lid off the Commodore fun? (yes) And they weren’t done yet: Dakota was their final offering, and another one I adore. Last chance for the audience to dance and sing their hearts out and they took advantage.

At quarter to midnight it’s all over and I’m so sad. I don’t want the proverbial chariot to turn back into a pumpkin, or the horses into mice, and return to the real world. This magical bubble in which Stereophonics play one favourite of mine after another (even if I missed Pick A Part That’s New and It Means Nothing) and I did end up hollering myself into a pounding headache, I know it can’t last, but that doesn’t prevent me from wishing it so. This show was all that I hoped for and every bit as good as I expected; one I’ll remember for a long time to come.