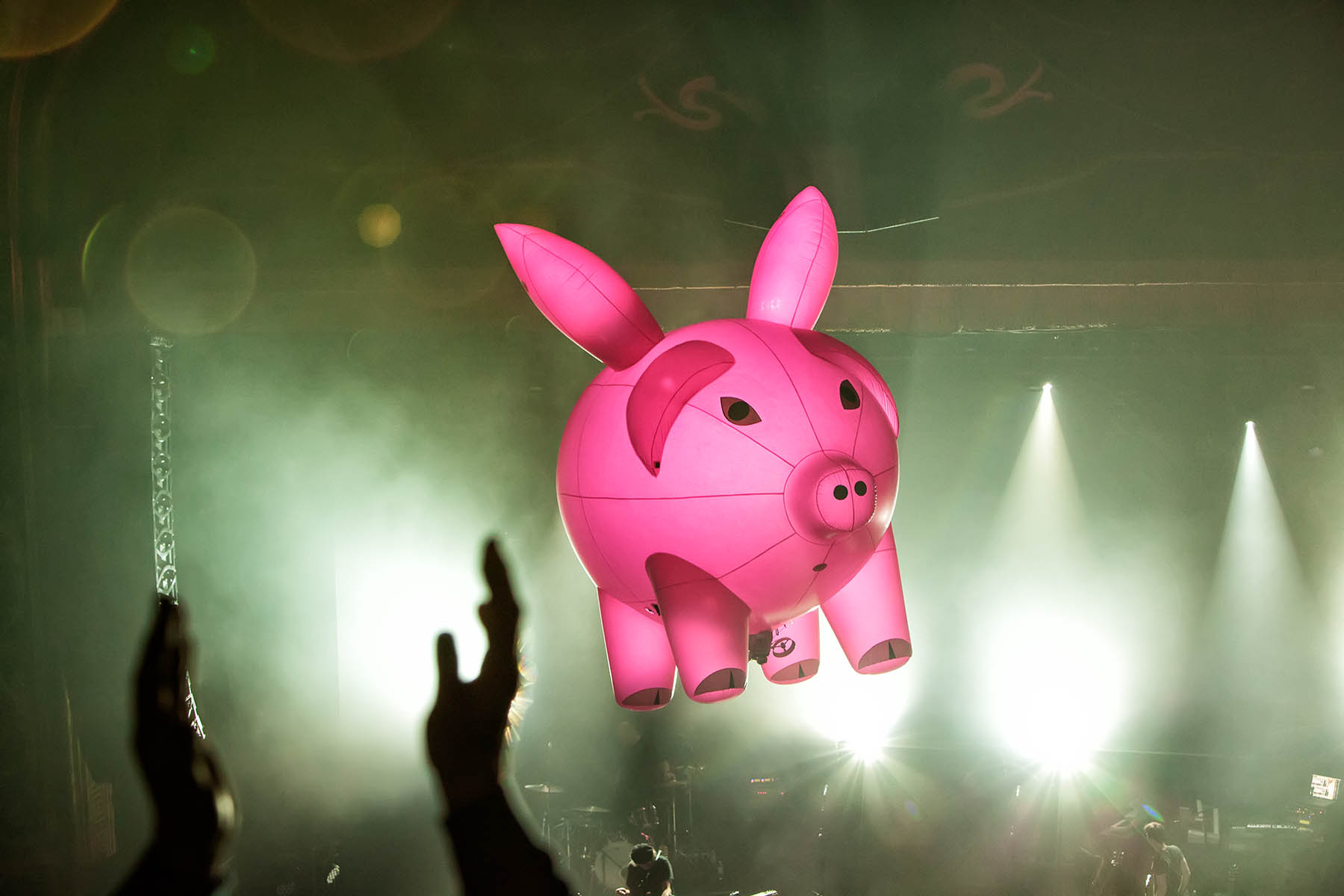 Celebrating their ten year anniversary and the end of their current tour, the Pink Floyd Experience delivered two rousing sets of well executed prog rock classics. Sticking primarily to the central years of Pink Floyd’s work under the shared writing of Roger Waters and David Gilmour, the PFX played a wealth of Floyd classics from their most popular era starting with 1973’s ground-breaking Dark Side of the Moon through Wish You Were Here, Animals and Roger Water’s opus, The Wall. Playing two sets of progressive rock classics in one of North America’s best sounding clubs, the PFX satisfied an audience of old time hippies, baby boomers and a healthy number of younger fans who have grown up raiding their parent’s record collections. The band was situated in front of a video panel displaying graphics which worked well for album artwork themes but in a rather pathetic fashion for songs like “Money,” which featured images of currency and lofty pixelated judgments about greed. The drab factory horizon artwork of Animals, however did amplify the dark undertones of those album’s compositions.

All six band members excelled at their craft. Band leader Tom Quinn lead the group with wild and spacey lead guitar lines that followed the spirit and structure of Pink Floyd songs with a healthy dose of spontaneity and improvisation. There have been many Pink Floyd cover bands; while there is certain limitation in the duplication of popular classics, the sheer thickness and dark toned organ generates a sound that cannot be justly replicated in recording. The superb acoustics of the Commodore perfectly supported songs with wider ranges such as the fantastic and meandering “Echoes,” a fan favourite from 1971’s Meddle. While the soft and spacey intro of the song was performed expertly, the song wrapped up in a jam somewhat haphazard in comparison to the euphoric bridge and reprise of the studio version. The Pink Floyd Experience or PFX, now decade long veterans of the material, enjoy spicing up their sets with improvisation. While a purest fan might be irritated at any deviation from the exact performance, the Pink Floyd Experience is an experience as its name suggests. Rather than duplicating the same solos played over classic rock stations, the PFX affectionately experiment within respectful boundaries. Some earlier Floyd tunes such as “One of These Days” and “Set The Controls for the Heart of the Sun” especially took off and surpassed the merits of their studio counterparts. Other compositions, while well executed, are overshadowed by the recent performances by Roger Waters himself. “Comfortably Numb” included a face shredding telecaster solo alive with a fiery intensity but cannot be rightfully compared to the scope and integrity of Roger Water’s performances of The Wall, then again it’s not really fair to compare a show to a production featuring the construction and destroying of a 30 foot wall in a stadium with a flying pig! That being said, Wish You Were Here and Animals, which feature some of Pink Floyd’s most cherished tunes, were well represented. Unusually Floyd cover groups draw most heavily from Darkside and The Wall; the less frequently played songs were particularly delightful, especially given the vibrant reinterpretations.

Overall, the Pink Floyd Experience expertly delivered the thick toned and spaced out anthems still worshipped by prog rock fans. Delivering high octane progressive rock incarnations of some of the most commercially and critically successful acts of all time, the Pink Floyd Experience delighted the crowd at the Commodore Ballroom and made expert use of the venue’s top notch acoustics. The original Pink Floyd may no longer operate but the dedicated or obsessed music fan can still hear their favourite songs performed in immaculate fashion. The band might be different, but the music is an experience.