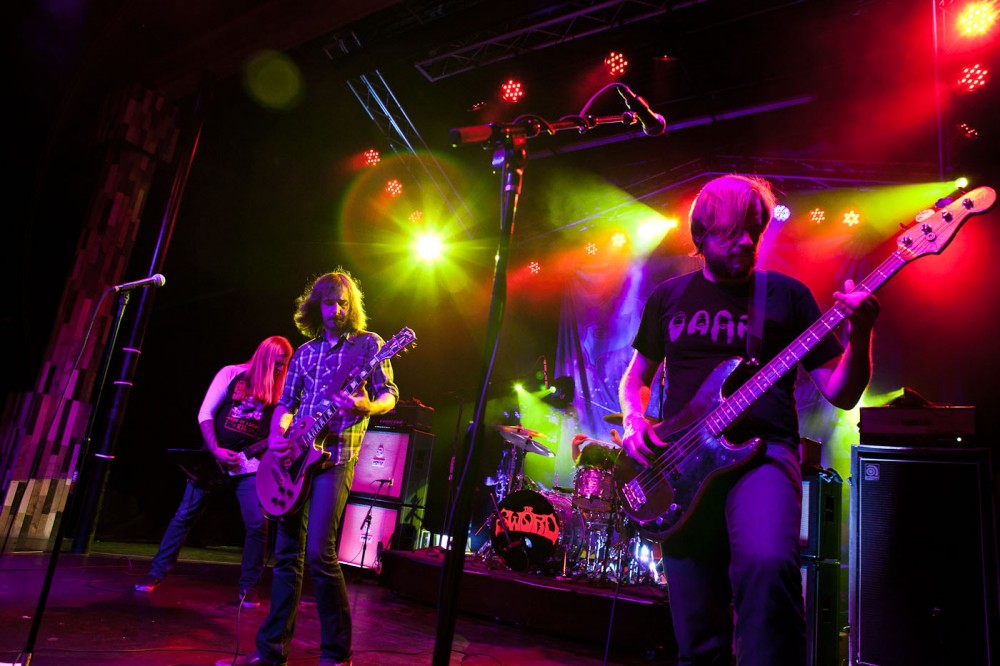 And now we head back to The Observatory, where I covered A Wilhelm Scream and The Flatliners. I’m also pretty sure this is the first none Punk show I have posted on the site. This time the show was in the big room and it was a good time, as should be expected at a show where The Sword is performing.

Up first was American Sharks from Austin, TX and while they need a little polishing they were solid for an opening act. The expected “get off the stage!” could be heard by that one guy who decided it was a good idea to drink his weight in booze before going to the show. I just don’t think it was warranted, especially since their music fits perfectly with The Sword’s. The drummer also did something I have never seen and played up front with the rest of the band, which made it really easy and nice to get shots of him. This always gave his sound a good, loud punch that could be felt. Their brand of Stoner Rock fits well in the current landscape along side Red Fang and Black Tusk. And yes that description works because as their singer said, anyone who pre orders the new album gets an ‘herb’ grinder.

Then Castle from San Francisco, CA took the stage. Their style is definitely in the classic Metal style and they wore that on stage. Lead vocalist and bassist Elizabeth Blackwell, owned the stage with her presence. She had the confidence of a seasoned veteran. Guitarist Mat Davis’s hair was a beast to be reckoned with, uncontrollable and in his face for most of the show. He walked around the stage like he had nothing to prove and he is a solid player. Their music is definitely for fans of older metal and was a great opportunity for the beer drink crowd to have a couple drinks and bob their heads while they waited for the main attraction of the evening.

The main attraction hit the stage in a bath a blue and purple light. The cover of their most recent album, Apocryphon, was used as their banner. The Sword is definitely on the top of their game. Nothing was lost in the translation from record to live show. Every weed and beer soaked note resonated through the music hall. The crowd ate them up and all of the long hair in the house was flying, since the average fan of this band had hair down to their shoulders, regardless of gender. The crowd was energetic and I even got a little beer spilled on me in the photo pit and almost got hit by a crowd surfer. These are not complaints, but just notes on the love the fans have for this band. I’m sure there were many sore neck on Friday morning. This tour still has plenty of fuel in it’s tank and you should go if it hits your town.