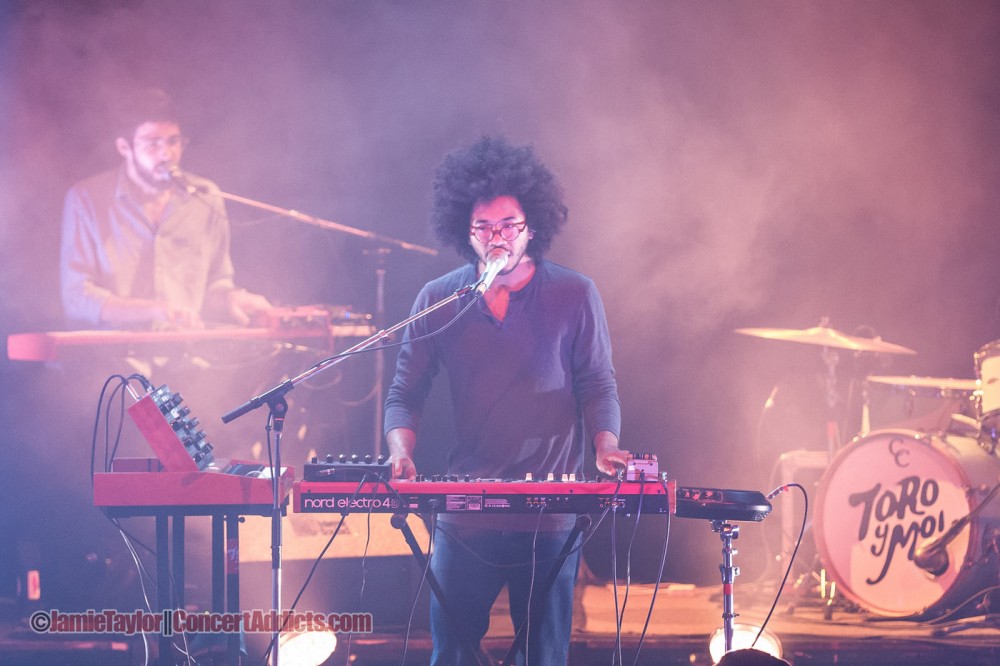 November can be terribly depressing. Nights roll in earlier than linger like an unwanted house guest as the cold becomes increasingly uncomfortable. Standing outside of the Vogue Theater, I was adequately bundled, but more importantly, I was waiting in anticipation of a temporary summer oasis. The smooth, sexy sounds of Toro y Moi have become synonymous with warm nights, mixed drinks, and uninhibited movement for me and to have recollections of those times was a blissful escape from the dreary dark of fall.

Toro y Moi is the moniker of Chazwick Bundick, a South Carolina native. Known as one of the main focal points in the “chillwave” movement, he’s become a well-known figure among music enthusiasts. However, over this time, Bundick has shown that he doesn’t want to stay static. From 2010’s Causers of This to 2013’s Anything in Return, Bundick has found himself constantly reassessing his identity as a musician with marvelous results. The modest, unassuming sounds from his early days have been fleshed out; the production that at times muddled his voice has been toned down; the musicianship has grown as he has matured. On his Vancouver stop, the Vogue was teeming with eager fans who would soon be graced with a show that perfectly captured this evolution.

The show began with Los Angeles DJ duo, Classixx. Now, I don’t usually have high expectations for opening acts, so I’m more inclined to say I had the wrong expectations. The set was enjoyable from a music stand point, and there were people who were definitely grooving to what they were producing, but I never really felt convinced by their presence. I can’t help but feel their show and music were not best suited for a stage that was front and center. Though a guitar was broken out at times, too much of the time was spent with the two of them at their own stations with various electronic gadgets. Like I said, from a musical standpoint it was incredibly enjoyable. Their tracks were reproduced accurately, but I struggled to call it a live show. But I still feel that this comes from my lack of experience with “electronic” shows. For all I know, this could be the norm and I’m unfairly judging them. But it really made me feel uninspired relative to past live experiences I’ve had.

This was a later show as Bundick was slated for a 10:30 appearance. These shows can make me apprehensive as I can sometimes feel drained by the time the main act finally plays. But most of time I’m riding an anticipation high and this night was no exception. When Bundick finally came on stage, he looked different from the pictures I had seen. His afro had been grown out, all wild yet tamed. He almost blended in on stage with his black attire. It was a presence that was modest, yet confident; unassuming, yet bold. On this tour, Bundick was being supported by four other musicians and they all excelled in bringing Toro y Moi’s unique sound to life.

The five man set up confidently cruised through a set focusing on his two latest efforts, Anything in Return and Underneath the Pine. Each song recaptured my imagination and interest as they excelled in the live atmosphere. The songs were recreated with mind of a live show and reinvigorated my interest in Bundick’s music. Toro y Moi truly captured an aspect of shows that I love: bringing studio music to life. Bundick may have looked calm and collected on stage having been playing these songs for so long on this tour, but this was juxtaposed by the unbridled excitement I had inside me hearing these live renditions.

The memories I had of spring and summer nights were vivid and enhanced the show to bring it to another level. Maybe this was just a reaction only I had, but it was the decisive factor that made it such an enjoyable evening. A lot has changed for Chazwick Bundick over the last few years and when he came on stage on that chilly November night, the fall seemed to subside for just a bit while summer came back. It was an oasis from the dreary, depressing days as the warmth felt vivid and consuming. Bundick made for one of my most memorable November nights and seeing others share in this euphoria was a beautiful experience.