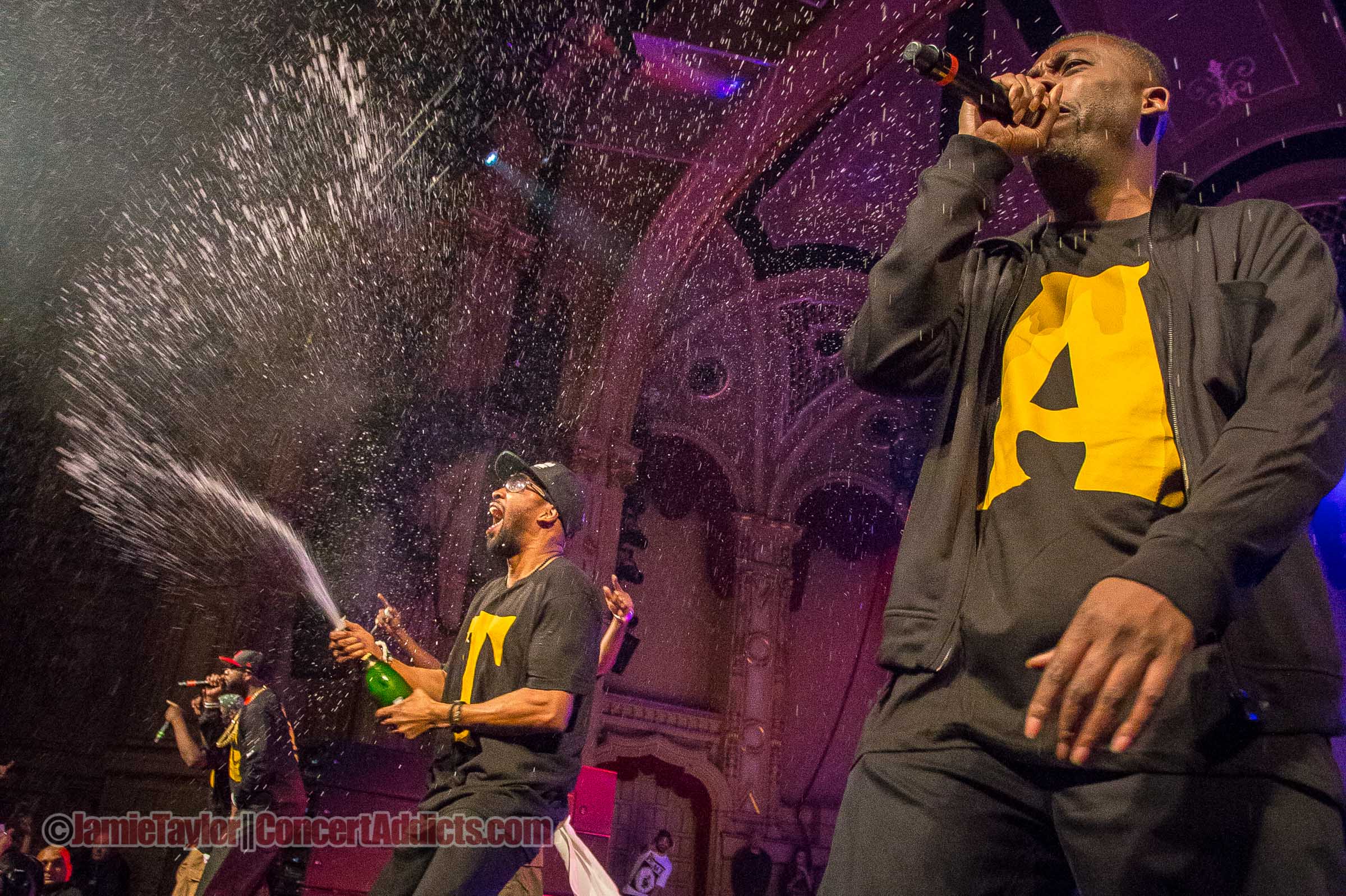 Walking into the Orpheum Theatre with its glittering chandeliers and late 1920’s baroque style sculpted façade, you could be forgiven for questioning the logic of bringing one of the grittiest and in your face rap ensembles of the last 20 years to the permanent home of the Vancouver Symphony Orchestra. Built in 1927 the Orpheum Theatre was originally a vaudeville house, bringing all manner of 1920’s classical musicians, singers, dancers, comedians, trained animals, magicians, jugglers, and minstrels to entertain the flapper crowds.

Fast forward to June 28, 2014, this majestic theatre was hosting a new millennium of vaudeville with an edge – living legends The Wu Tang Clan. With nearly all members of the Wu Tang Clan in attendance, sans the late Old Dirty Bastard, and Method Man unfortunately nowhere to be seen, with little explanation as to where he was. Each member bought their own unique sense of rap esthetic to the nearly 100 year old theatre to create a symphony of the street that the crowd just loved.

Scanning the crowd while waiting for some buddies to shuffle their way to the front of the bar, you could see the excitement radiating out of this mis-matched group. Every subculture and cross section of the 45 and younger population was there, so pumped to see The Clan in all their glory. This was evidenced when a bodiless voice came over the PA announcing the show was starting in 10 minutes and was greeted with a guttural “Wu Tang” chant that spread throughout the foyer. The crowd knew why they were there and they knew who they wanted to see.

Twenty years after they broke on to the hip hop scene, the Wu Tang Clan are singing their swan song, touring their final forthcoming LP, A Better Tomorrow. The fat lady has sung and it’s time to hang up their spurs. But before they say sayonara, Wu Tang Clan had a score to settle with the Vancouver fans…. for the first and the last time, Wu Tang Clan was here to rock the Mother [email protected]#$%ing House!!! As the first beats of “Bring Da Ruckus” dropped and The Clan swaggered out dressed in black with yellow letters on their T-shirts spelling out Wu Tang, the crowd responded to seeing their heroes by immediately saluting them with their signature hands in the air to form a Wu. What followed was a live discography of the last 20 years, Wu Tang knew what the crowd wanted to hear and they were happy to accommodate. Dropping much loved tracks like “Da Mystery of Chessboxing”, C.R.E.A.M and “Clan in Da Front” from debut album Enter the Wu-Tang (36 Chambers) the crowd was sparking up and getting down.

Unfortunately, there was one beef with the show, the sound wasn’t that great. I wondered if it was just where I was, closer to the back of the orchestra section. However, my buddies, who were in the balcony section, concurred with me in the mandatory post show de-brief drinks that the sound was shoddy where they were too. It was as though the speakers couldn’t handle the bass heavy beats and the baritone register of The Clan. The sound was constantly crackling and blowing out. I also noticed, and was also agreed upon in consultation with my mates, that some of the Wu Tang’s microphones sounded softer than other members and were quite muffled. Even with the sound discrepancies and the lighting issues, with Ghostface letting the lighting person know that he wanted more mood lighting over the sterile white lights, Wu Tang created a performance that was both memorable and engaging.

Wu Tang Clan was there for the fans. By the time the “Wu-Tang Clan Ain’t Nuthing ta [email protected]$% Wit” sing-along had started, they had autographed Wu memorabilia for lucky audience members; sprayed the audience with Moet Chardon; and had the crowd swinging peace signs in unison. They also paid their respects to the engine room of the Wu Tang machine, their DJ. As they so eloquently stated – before B- Boys, before Breakers, before Rappers there was the DJ and Wu’s didn’t disappoint. In the DJ solo that ensued he seamlessly went from scratching front ways, to back ways, scratching with his elbow and at one point his nose, and for the finale kicking off his shoes without missing a beat.

I would have liked to have seen more interaction and chemistry between the members; however, you couldn’t fault them for not engaging with the crowd. They had the crowd dancing to a homage jam in memory of Old Dirty Bastard with quick inserts of “Shimmy Shimmy Ya” and “Got Your Money” and even did a Wu themed cover of The Beatles’ “Come Together”. Towards the end of the show they had the crowd lighting the stage with their cell phones to create DIY dance party.

Even though this tour is supposed to be their finale, during “Reunited” from Wu Tang Forever, I had to wonder, would this really be the last time the Clan would be performing together. I’m not so sure. It seems the allure of playing to sold out venues with thousands of people lapping up all that you have to say and more, is just too damn desirable. It’ll be interesting to see if they have the willpower to stay away from the spot light. I’m glad I got to see them before they disbanded. However, let’s hope we’ll have to call their bluff one day and see them back on the stage and in front of the mic.