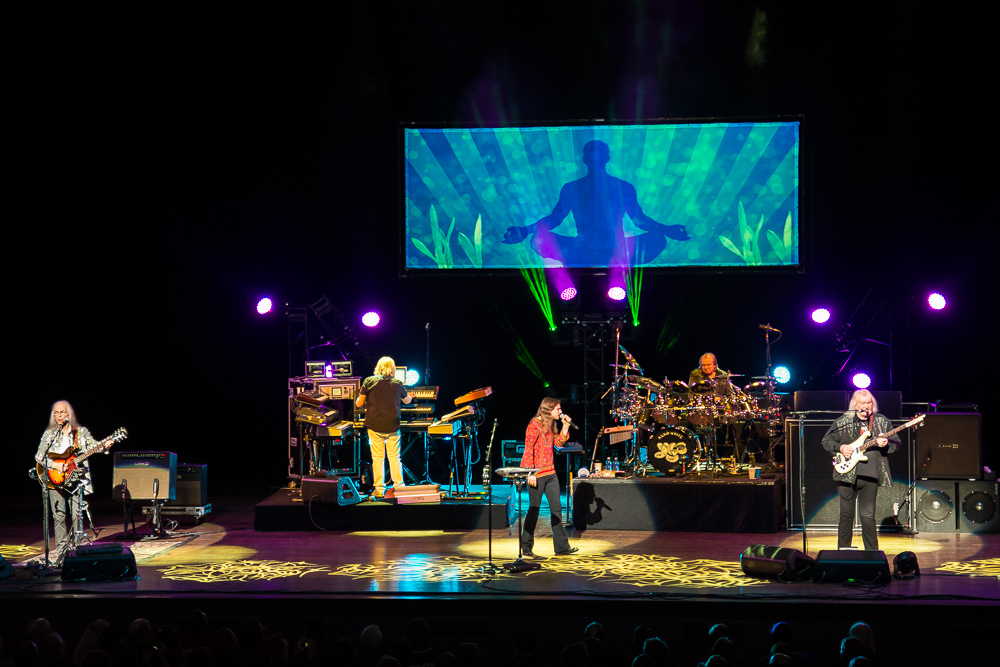 I am not the world’s biggest Yes fan.

I don’t own any albums, I can’t name the majority of their songs (if I can even name more than about 10 without an assist), and I would’ve earned a big 0 on trying to name any band members before the night of the concert.

But when I was younger, my Dad had a Yes “Greatest Hits” album that we listened to in the car on the way to and from school and that’s how I was introduced to them. Songs like ‘Roundabout’, ‘I’ve Seen All Good People’ and ‘Wonderous Stories’ ran through my head amongst who knows what else I was listening to at the time, and I feel it had a pretty big effect on how my taste in music evolved. A lot of memories are held with that album and those songs; so when I heard that I could see one of the biggest and most influential prog rock bands of all time, I immediately jumped at the chance to hear some of my favourite songs live.

The concert was held at the Queen Elizabeth Theater which is confusingly connected to the Vancouver Playhouse but I managed to figure it out. There was no opening band, so the stage was set for Yes already as people rolled in slowly until 7:30 hit, which was when the flood came in. I think I could count the number of people there that were my age on my fingers, and given the cost of tickets that made sense. However, that price also reflected how dedicated some of the fans were; coming to out to see a band they’ve loved for up to about 46 years, potentially for the last time they’ll ever come around these parts. There was even a fellow there that was blind. That’s dedication.

As the night started, a clipshow started up on the screen behind the set. It ran through pictures of the band and albums, and the audience cheered along as their favourites came along. Afterwards, the band hit the stage to cheers and applause, with some people standing up in their seats already, and started with part of ‘The Firebird Suite’ (something I never would’ve known without the internet) which they work into the beginning of ‘Close to the Edge’ perfectly. Yes played three albums that evening, first of which was, of course Close to the Edge. A psychedelic background ran across the screen behind them as they rocked out; Steve Howe was playing guitar and also had a second guitar set up on a stand so he could play it also without removing his first guitar, Geoff Downes had the epic and nigh-ridiculous keyboard set up, Alan White was crashing away on his drum kit, Chris Squire had a fan keeping his hair flowing in the wind, and Jon Davison looked like a man out of time as the frontman of the band. Though there were parts pf ‘Close to the Edge’ that felt janky, things felt a lot more together and cleaner for ‘And You And I’. Steve Howe got on his pedal steel on wheels, and Chris Squire busted out a harmonica for people to go wild for. ‘Siberian Khatru’, of course, closed that portion of the set, leaving Chris Squire and Steve Howe to talk about the first two of the three albums that would be played that night.

Album 2 was Going for the One, so ‘Going for the One’ (one of my favourite Yes songs) was followed by ‘Turn of the Century’ which was amazing during the acoustic section, and ‘Parallels’ which has that heavy church organ-style keyboard line. ‘Wonderous Stories’ is another of my favourite songs, being one that I remember from years long gone, and with ‘Awaken’, Steve Howe played the bizarre Steinberger model guitar, and Chris Squire had his triple bass which was a bizarre but incredible sight to see. As Chris Squire held his bass up in the air with one hand, it was time for intermission and I sat back and waited for the final album.

The album I was greeted with was, as the people next to me had said it would be, The Yes Album. ‘Yours Is No Disgrace’ which once again sounded a bit off time at points but at the same time Steve Howe just killed it on his guitar solo. Speaking of which ‘Clap’ is incredible. The rest of the band left the stage and Steve Howe just busted the song out on his acoustic, hitting every note in utter perfection. ‘Starship Trooper’ and ‘I’ve Seen All Good People’ are a couple more songs that click into place with my memory of Yes and are two incredibly well written songs. With stuff like this, it can’t be denied for even a second that The Yes Album is an incredible album. ‘A Venture’ and ‘Perpetual Change’ ended the night, and near the end of ‘Perpetual Change’ two cannons on the side of the stage just blasted out confetti all over the crowd as Yes laid waste to the end of the song. The band was then named off, and with some bows being taken, left the stage.

But as one would expect from a veteran group, there was an encore and they came out and played the one song I wanted them to play more than anything else: ‘Roundabout’ from Fragile. There is nothing about the song that isn’t amazing: the harmonies, the heavy bass line, the fingers flying on the keyboard, the snappy work on the drums; all perfect. There was no better way to end things.

Like I say, there were certainly times where things weren’t as tight as they should’ve been but for the majority of the show they were everything that I wanted the band to be.

Excluding one little nitpicky thing that I kind of hate bringing up because there’s really no avoiding it.

Jon Davison is not Jon Anderson. At all. He’s a decent enough sound-alike but that’s all he is. Which isn’t to take away from his ability at all but Jon Anderson’s voice is just so tied into the group and the sound of their songs that hearing anyone else singing them just won’t ever be as good. Even with Howe and Squire’s still pretty damn dead on vocal harmonies, Davison just can’t quite ever measure up.

Yes is an incredible and influential band that everyone should have or should be listening to. There’s still plenty of time left on the tour and if you can shell out the money for a ticket, you won’t ever regret it.