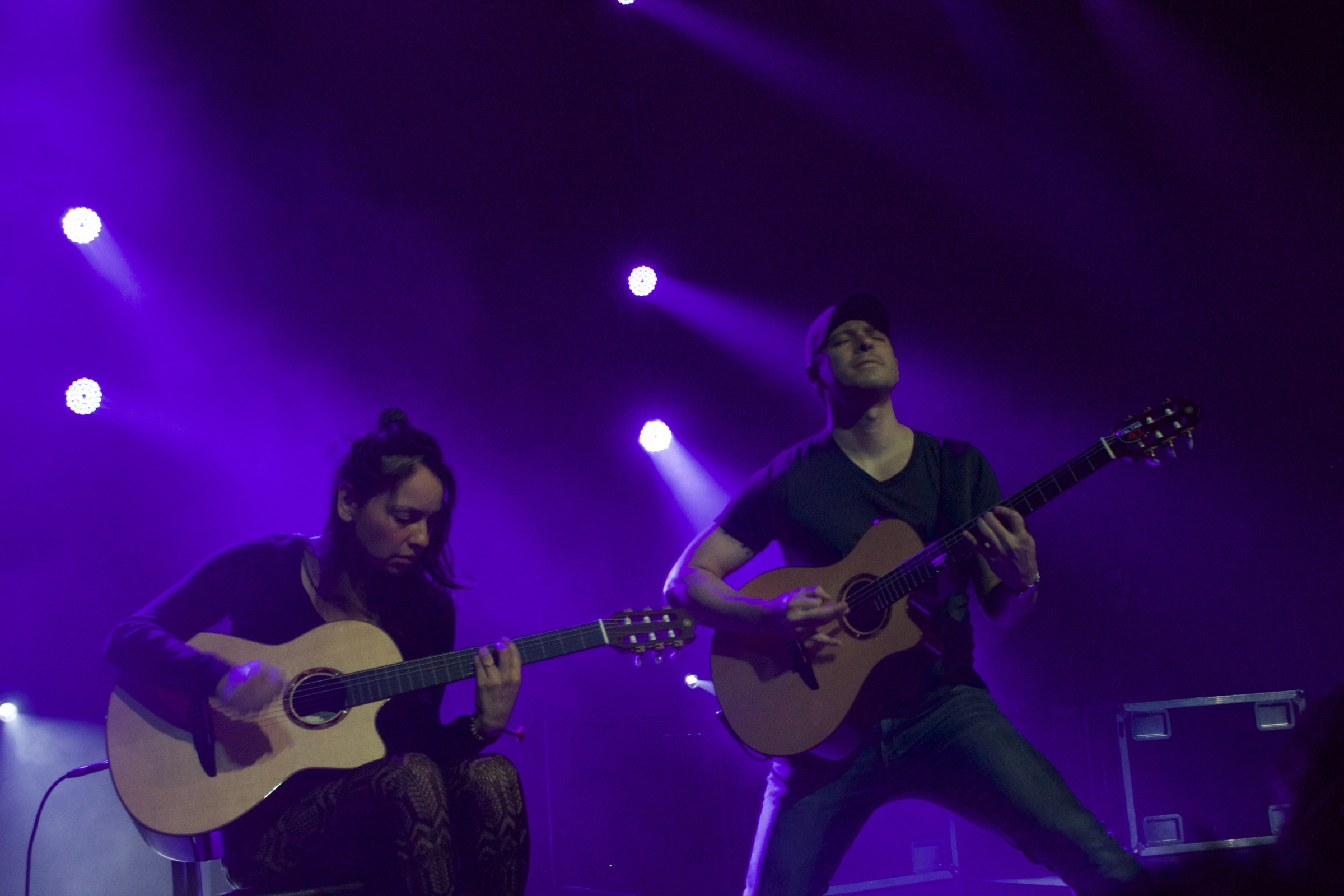 The stunning guitar chemistry and jubilant spirits of Rodrigo Y Gabriela charmed a packed Vancouver audience at the Vogue Theatre. Rodrigo Y Gabriela have for years now distinguished themselves as acoustic guitar champions and have lured thousands of fans into discovering the vivid and wonderful world of latin guitar. Known for fierce and flamenco-y renditions of classic rock and metal pieces, Rodrigo Y Gabriela present a captivating blend of modern energy and classical beauty.

Casually but enthusiastically walking onstage, Rodrigo Y Gabriela instantly launched into their energetic brand of duelling, Neuvo-Flamenco guitar. Audible timbres of two breathing, battling acoustics is a welcomed pleasure in a modern, digital age; it is both the simplicity and complexity of Rodrigo Y Gabriela that makes them so alluring. Switching duties between hand-slapping rhythmic guitar and melodic leads, Rodrigo Sanchez and Gabriela Quintero are one of the most intriguing and successful Mexican artists to break into North American commercial success.

Skilled musicians beyond a doubt, Rodrigo Y Gabriela admitted that they had never before visited Vancouver despite several visits to the North West. The pair have, made a considerable impact on regional musical memory with several exemplary Sasquatch main-stage performances at the Gorge Amphitheatre. Speaking comfortably and candidly to the audience, Rodrigo stated that the pair were not actually on tour and were just in the neighbourhood and thought that they would play a show. Although they had a setlist, Rodrigo said, they had really had no intention of following it and would instead ask the audience for input. Handing the microphone into the crowd, an excited fan determinedly made a request: “Diablo!”

Rodrigo walked to the back of the stage, placed the microphone on an amp, and stepped back towards Gabriela as the two effortlessly soared into “Diablo Rojo” from their self titled 2006 album. Rodrigo had teased Gabriela, as she had recently injured her ankle; this would be her first show played entirely from a chair. While she was forced to be stationary, her enthusiasm did not suffer.

After several more requests, including the pair’s noteworthy interpretation of Metallica’s “Orion,” each musician would step offstage and allow the other an opportunity for a solo showcase. Gabriela would treat the audience to a vivid and spacey solo with heavy emphasis of a wah-wah petal. A darkened stage was pierced with rotating green stage lights.

Rodrigo’s mini set of the evening included a cover of “Plush” by Stone Temple Pilots, likely inspired by his visit to the North West given the incredible influence of Seattle grunge upon an entire generation. Somewhere along the way Rodrigo laughed as he stumbled through the lyrics, admitted he forgot the words and asked the audience for another request. Hearing an excited shout of “Radiohead,” Rodrigo quickly slid into relatively faithful acoustic take of “Creep” with much of the audience singing alongside in the chorus.

Rodrigo thanked the security staff for allowing him and Gabriella to invite a couple of dozen fans onstage to dance behind the performers. The spectacle mirrored the glowing energy of the pair’s fast paced acoustic chemistry. After the audience’s enthusiastic call for more, a member of the stage crew assisted Gabriela as she hobbled with her injured leg back to her chair. The setback didn’t affect her playing, nor did it affect her infectious smile.