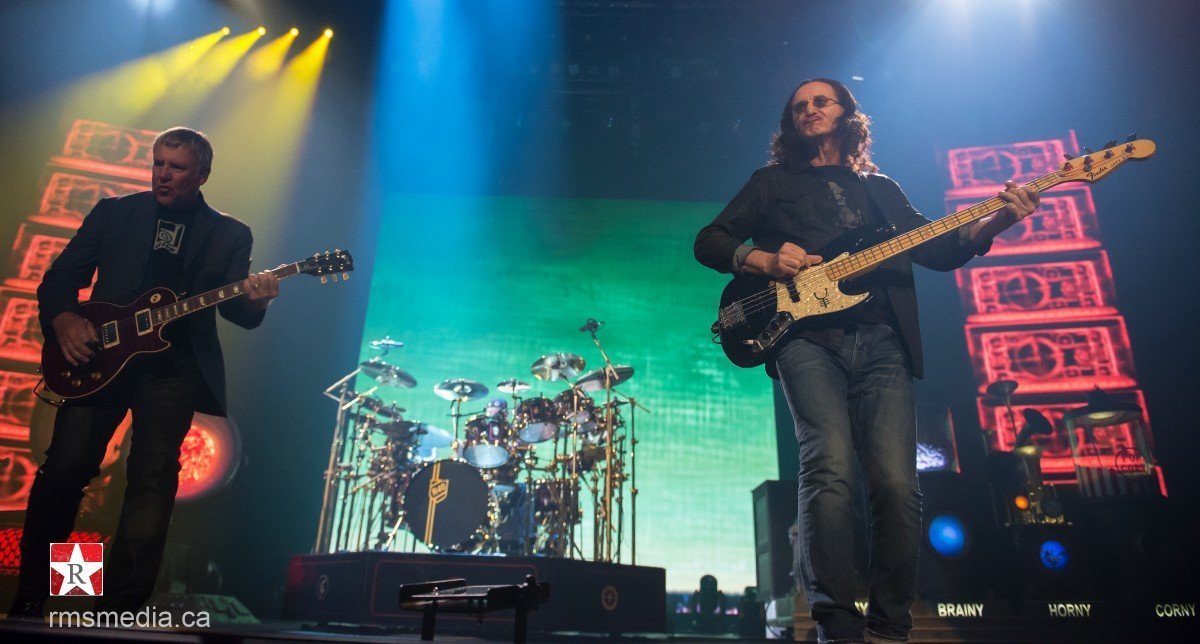 The Canadian progressive rock band Rush returned to Vancouver on July 17th for a retrospective concert at Rogers Arena. This was one of many stops on their current R40 Live Tour, celebrating their 40th anniversary as a band. Many fans knew that this could be Rush’s last tour, as drummer Neil Peart has been experiencing chronic tendonitis in his arms. Said tendonitis is a result of decades of touring and playing alongside Rush bassist and vocalist Geddy Lee, and guitarist Alex Lifeson. Nevertheless, physical health problems were absent, or well-concealed, by the aforementioned prog rock wizards during this memorable Friday evening in Vancouver.

The concert was a treat for Rush’s wide spectrum of fans, who varied considerably in age, but were invariably dedicated as followers of their music. Rush took great care in assembling their career-spanning showcase, splitting the evening into two sets, and starting each set with a short animated film. The first film presented a sonic montage of their catalog, after which the curtain slowly lifted and the Canadian trio were revealed from behind. They dived right into the set with a pair of songs taken from their most recent album Clockwork Angels. A brief drum solo was performed by drummer Neil Peart during “Headlong Flight”, which provoked fans in various ways — hand clapping, loud cheers and even primal screams.

As they traveled backwards in time, Rush surprised their fans with a special performance of the song “Losing It”, taken from Signals which was released in 1982. Bassist Geddy Lee briefed the crowd by stating that the song  — had only been performed three times previously, and that tonight would be the fourth time. Following Lee’s remarks, violinist Ben Mink emerged onstage.  Mink originally played violin on the studio recording of “Losing It”, and this would be Mink’s live premier with Rush. Not surprisingly, the performance was met with a wealth of praise from all around Rogers Arena. The first set of the night did not revisit Rush’s classic rock era, which gave reason for some older fans to grab a beer from the venders. The second set, however, focused on Rush’s material from the 70s and early 80s.

After another short film, this time featuring the main characters from South Park, the live staple “Tom Sawyer” started the second set of the night after Cartman counted the band in. Rush then busted out “YYZ”, one of their highly technical instrumental pieces. Much air drumming ensued. The retro rock single “Spirit of the Radio” followed, which gave the crowd an opportunity to clap in unison. The evening continued with other songs taken from Permanent Waves, including “Jacob’s Ladder” which demonstrated Lee’s musical prowness with analog synthesizers, and Peart hammering on a set of chimes behind his drum kit. Leaving the 80s behind, Rush transitioned into their songs from the 70s.

Geddy Lee lead the way with some thick, beefy basslines which indicated it was time the sci-fi influenced epic “Cygnus X-1”. After this swirling performance, Lee and Lifeson left the stage and allowed Peart to dazzle the crowd with another drum solo. When all three band members were back onstage, they resurrected another well-crafted sonic adventure from the 70s. Lee and Lifeson made this possible when they brought out double-neck guitars to play “Xanadu”.

The dynamic stage setup was another piece of the R40 experience, which regularly changed as the concert went on. These changes was designed to compliment the various eras revisited by the band. For instance,  the washing machines seen during the Vapor Trails Tour in 2002 were behind Lee tonight during “One Little Victory”. During the second set, Marshall amps were setup behind Lifeson; and Peart’s bass drum skins depicted the logo seen on the album cover for Hemispheres. As the show went on, roadies dressed in red R40 uniforms replaced these props with others. During the encore, wooden chairs were brought out to hold up smaller amps used when Lee and Lifeson were young musicians.  The backdrop displayed a high school gym as the band was now playing songs from their first album Rush. Regardless of what era was depicted by the stage props, the band performed in top form during the entire evening.

As the progressive rock veterans waved goodbye, the curtain descended to conclude the evening. However, the curtain was not blank; it depicted R40+ suggesting that Rush will continue on after R40. Their ability to stay together — after all these years — can be summed up by drummer Neil Peart’s words, taken from Rush’s song “Marathon”: