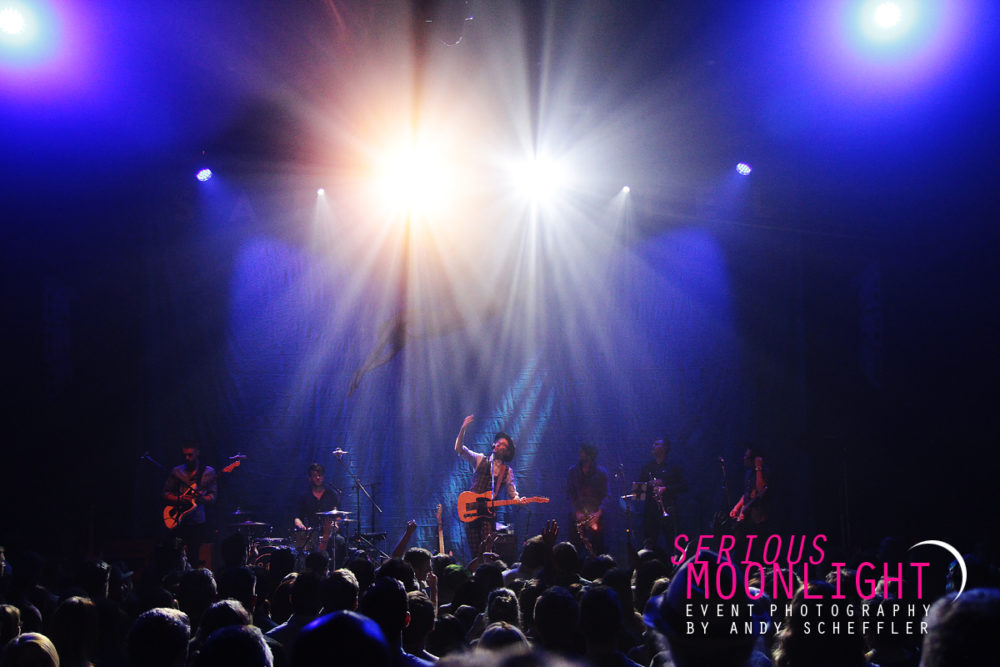 When I arrived here tonight, Phases was already a song or two in to their set. The room was already pretty packed, leading up to a sold-out crowd. On stage, in front of Saint Motel’s massive ‘diver’ backdrop, Phases was set up with a large variety of synths across the front of the stage. Lead singer Z Berg is a fine frontwoman, outfitted in a black tights/shorts/bodysuit combo and showcasing moves that indicate perhaps she has a bit of dance experience. This band is kind of like an indie supergroup, with members past and present being pulled from acts as diverse as Bright Eyes and Maroon 5. As has been noted elsewhere, Berg’s voice has some similarities to Bjork’s, though the music is of course nothing like it (what is, really?). She almost always has a huge grin across her face – clearly having a blast – and repeatedly seemed in awe of the crowd’s enthusiasm. “No one told us Vancouver is the most lit place on earth. This next song is a dance number, so take a cue from the crew down here!,” she said, referring to a super energized clump of people stuck to the stagefront. She pointed out as well they have a video for their single “I’m in Love With My Life.” “It’s on the internet. I don’t know if you have the internet.” At the end of the set, she decided to join the throng of dancing folks and slipped off stage to boogie with them. They responded in kind, and one guy even hoisted her up at one point. I think his intent was to plunk her back on the stage, but it became increasingly apparent he was, let’s just call it, differently-influenced, and was not able to actually get her up that high. She shuffled off through the crowd, and that was the end of the set.

A fairly long time was set aside for the set changeover, and no wonder with the amount of instruments and whatnot coming out onto the stage for Saint Motel. And by ‘whatnot,’ I mean, a tiger. Yes, a life-size tiger sculpture was wheeled out onto the stage, which it turns out was singer A/J Jackson’s keyboard stand. While the set-up continued, fans did their best to pet the tiger, sitting right at the edge of the stage on a little astroturf platform. As well, a blow-up doll that had been standing at the back of the stage toppled over just before the band came on stage. Now they made references to this being their first show in Vancouver, which is not true as far as I know – perhaps they meant ‘this year’ or ‘on this tour’ rather than just in general. They are known for a lot of songs, but in particular, “My Type” has totally blown up like mad the last while. Frankly, I’m surprised they weren’t playing an even larger venue than this, though that massive banner of theirs would only fit in so many spaces.

In a word, this set was fun. There was movement all over the stage. Jackson’s matching plaid slacks and vest and wide rimmed hat were an interesting look to go with his easygoing dance moves. The hat flipped off his head a few times as he kneeled or flung his head around while playing. Tucked at the back of the stage, a horn/percussion section, drummer Greg Erwin’s kit was a delicious sparkly ice blue…. Delightful. With the ontage energy and the horns and the props, the whole show was just a marvel to watch. “There are some animal fans in the house!,” Jackson noted, as people continued to try to pet the tiger. “I’d like to introduce you to this tiger… it’s his second show.” He also summoned the crowd to put their cel phone flashes on and direct them towards the stage for a song. Very cool effect. Also seems they are couch surfing for this tour (or at least this stop) and they thanked someone named Cameron, who’d been in film school with some of the band, and whose place at which they were crashing. The audience danced up a storm, commented on Jackson’s hat, and appropriately tore up the room with “My Type” was performed. For the encore, the tiger was taken away, clearing the stagefront for more movement by the band. Some girls took it upon themselves to hop on stage and dance with the band. The guys looked really amused by this but security didn’t agree and quickly kicked them off. One final shenanigan – the blow up doll was retrieved from the floor and introduced as well. “Meet our diver,” and we did, just before she was chucked overhead by Jackson into the crowd to bounce around before disappearing after a couple minutes. Whether she became someone’s souvenir, or just was trampled underfoot, we may never know…