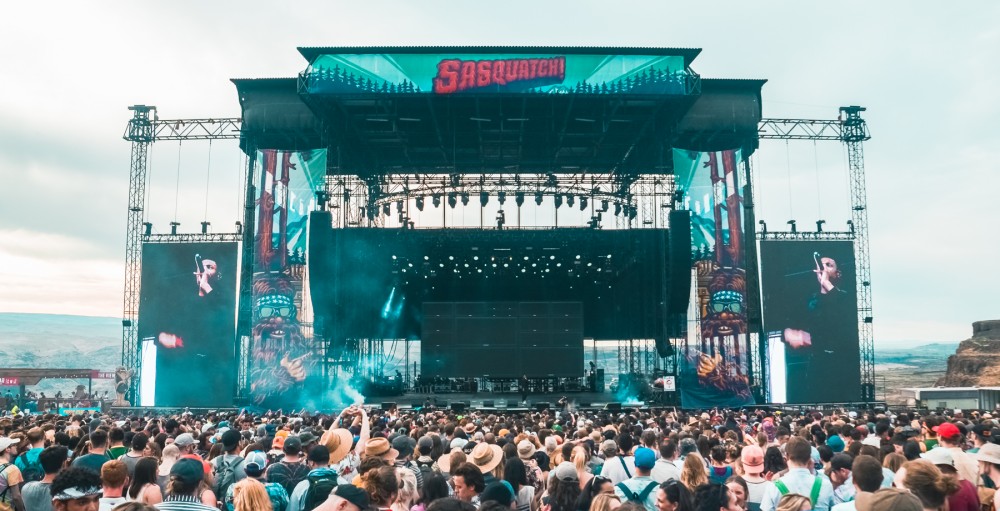 Holding a spot as one of the region’s most recognized and distinct music festivals, Sasquatch! completes another successful memorial day weekend filled with returning bands like Modest Mouse and Seattle locals like Gifted Gab. The event was hosted at the iconic Gorge Amphitheatre from May 25th to the 27th and was a huge success in relation to recent years.

For Pacific Northwestern natives and travelers from all over, this weekend is a necessary pilgrimage that allows music lovers of all ages to escape the urban jungle and let loose in a picturesque desert paradise. The festival grounds overlook the main stage which blends into the stunning view of the expansive Columbia River Gorge. Don’t be fooled, this festival might be in a state known for its constant rain and moderate temperatures, but this is far from the truth when it comes to early summer in central Washington. The weekend was blessed with constant sunshine paired with a cooling breeze. The perfect festival weather.

Over the past several years, the festival has been trying to stay relevant with little success. One year was rocked with their decision to add a second weekend and then pull it only months prior. Also, they had been struggling to understand and take advantage of the electronic music boom, which plagued their lineup with DJ headliners which did not fit well at all with their normal crowd. For Sasquatch, keeping to the roots is the way to go since the formula has worked since 2002. Seeing people’s reactions to the diverse lineup this year was a treat and it was clear that the indie hype was real for 2018.

As Friday arrived, the campgrounds filled in the early morning as beer racks and tents were unloaded and distributed to thirsty fans ready to kick off the weekend. With the stages prepped and food trucks ready to feed the raving crowds, the venue opened its gates to the music-hungry masses.

Memorable acts in the early hours of the first day included Son Little, The Garden, and Wolf Parade. Son Little delivered a soulful performance on the Bigfoot stage, serenading newcomers pouring into the venue grounds. On the Yeti stage, eye-patch-wielding duo, The Garden, electrified the crowd with an energized set driven by strong basslines and Beastie Boys sounding vocals. Wolf Parade also came out strong with a crowd-pleasing set that had fans spilling their beers from too much dancing.

After playing the smaller Bigfoot stage several years ago, Vince Staples took to the main stage with class and an energy familiar to those who have seen his set. He burst out wearing a bulletproof vest which is only appropriate after hearing his lyrics which comment on social issues and race problems in the United States. He has come a long way since he started and his confidence on stage was contagious as always.

The golden hour sun was now setting the festival grounds ablaze with sunshine as Tash Sultana took to the Sasquatch stage. The set was impressive as Sultana went solo, utilizing loop pedals and digital delay to layer instruments into full sounding ballads that peaked with Sultana’s lasting vocal pipes.

Coming in hot from his current tour, Talking Heads frontman David Byrne took to the Sasquatch stage with a fun and expressive mood. His show included a group of musicians wielding an assortment of drums, keyboards, and bells. The best part was Byrne blending in and not taking attention away from the spectacle. He was barefoot and having fun with the dance routines which mirrored marching band performances. Then “Burning Down the House” came on which brought everyone in the crowd to their feet.

With the sun finally set and darkness hiding those lovely potholes and rocks on the ground, Thundercat came on with his deep, colorful locks and funky digs. What followed seemed to be the band just riffing and having fun. Jazz, jazz, and more jazz was the theme and everything in between seemed to blend in perfectly.

Despite the full day of music already seeming complete, one of the weekend’s headliners took to the stage with a confident elegance. Bon Iver was simple, soothing, and expressive, and this show displayed that. The slow-building start included singer Justin Vernon’s voice solo’ed over layered synth harmonies and a hint of autotune used in a minimal sense. From here the set could be considered magic as it mesmerized the glowing crowd into a trance.

Closing out the first day of music was hip-hop icon, Tyler the Creator. His attitude was surprisingly humble and reserved, which branches out from his original wild and aggressive show style. This Tyler seemed contemplative. His songs would start out sounding like simple, spoken word poetry written on the bus to school, and would peak with a burst of bass and his signature bursts of movement.

Day 2 came around soon enough and the heat was real. Campers burst out of their sweltering tents in the early morning and had no choice but to chug a Gatorade (gotta have those electrolytes) and put on their dancing shoes. It was the kind of day to find an ice cold drink and a tree to sit under. The hill overlooking the main stage was cooking like an oven which forced people to gather around the edges, scared to revive that red lobster burn they got the day before.

With Day 1 already receiving an ecstatic reception from fans, groups were rushing to get into the Saturday shows, excited to get their Rainier on. The daytime lineup included sets by Lizzo, Grizzly Bear, and Shakey Graves. With a decorated history in the Hip-Hop scene, Lizzo performed an energetic and confident set with her backup dancers moving all over the stage in a similar fashion. After playing some of the earliest Sasquatch festivals, Grizzly Bear returned to deliver a heart-warming performance that matched the chill mood of the day.

As the crowd was bursting with anticipation, Shakey Graves and his band played next and woke everyone up from the Grizzly Bear trance that was memorable, but so so sleepy. His persona was enlightening and had the crowd up on their feet for the night.

Cheers went up as the sun finally set for the night. The heat was gone and the chilly touch of night air was welcomed. Whispers could be heard around the festival about the upcoming show of the night, Modest Mouse. They played one of Sasquatch’s earliest festivals back in 2002 alongside Death Cab for Cutie, Jurassic 5, and The Flaming Lips, and are considered to be Sasquatch veterans. Finally, their stage setup lit up the hill and the show began. The nostalgia could be felt as they played old classics such as “Float On”, and featuring more recent hits. The bright blast of fireworks highlighted the end of their set and satisfied faces were reluctant to leave the stage.

To close the night, electronic extraordinaire, Jair Wolf, and post-rock band, Explosions in the Sky, were set to start. These shows were both incredible in their own right; Jai Wolf with his masterfully produced electronic anthems and Explosions in the Sky with their ambient walls of sound. The problem was sound bleed between stages.

It was a problem all weekend, but this was where you could seriously notice it. Explosions is a very quiet band; they have empty space in their production, and the electronic beats of Jai Wolf totally cut into it. Besides this, Saturday was flawless and the vibe was very positive around the crowd.

Waking up for the final day of music was tough, but necessary. The sun was still looming over the dry ground, and there were no clouds in sight. Nevertheless, the campground was buzzing by 9:00 AM and the smell of bacon grease was wafting around, drawing hungry groups out of their tents.

Walking to the venue for the last time of the weekend is never fun either, but people’s steps were quick as Sunday’s music lineup was stacked to the brim with diverse talent. The highlights of the day included Gifted Gab, Jacob Banks, Slowdive, The National, and Anderson Paak & The Free Nationals.

The Bigfoot stage featured an eccentric Gifted Gab, a Seattle Rapper and first women performer in Nacho Picasso’s Moore Gang. Her personality and flow were perfect for the Sasquatch and it was a pleasure to see her perform on such a large scale. Her voice reminded me of a young Lauryn Hill from The Fugees. Next up on the main stage was Birmingham R&B singer, Jacob Banks, a name now familiar to many people attending the festival. He had an impressive set of pipes and wasn’t afraid to let his notes extend to showcase his range.

After a long hiatus from performing, Slowdive made an appearance on the Bigfoot stage to a grateful crowd. They played older cuts as well as their newer hit, “Sugar For The Pill” which was well received. Rachel Goswell’s colorful dress gleamed from the stage lights and you could see the first few stars popping out of the darkness above the stage.

The final performance on the main stage was given to American rock band, The Nationals. The frontman and singer, Matt Berninger shined with charm and his vocal range. Similar to David Byrne, he too would melt into the band, forcing you to take in the group as a whole rather than singling him out. A humble and awesome way to take in a band’s performance. Their songs about hometown Ohio and relatable life situations shined bright while complimented with Matt’s beautiful voice.

Finally, the last set of the night started, and Anderson Paak came out with his group, The Free Nationals. The set was unreal to watch as Paak would jump across the stage, shouting his aggressive lyrics and reminding me of Kendrick Lamar’s stage presence. The highlight of the show was Paak hopping on the drum set and blowing everyone away with lightning fast hands and freeform ability. This tour is a must see.

And with that, Sasquatch 2018 was a wrap. Tired crowds made their way back to the campsites to party for one more night before heading back to reality in the morning. All in all, a solid weekend. The choice to move back to three days from four was a blessing on my aging body and I’m sure many other people as well. Furthermore, the diversified lineup made for a wide-reaching blend of music. Electronic acts were accompanied by analog instruments and singers that enhanced the experience. See you next year Sasquatch!.