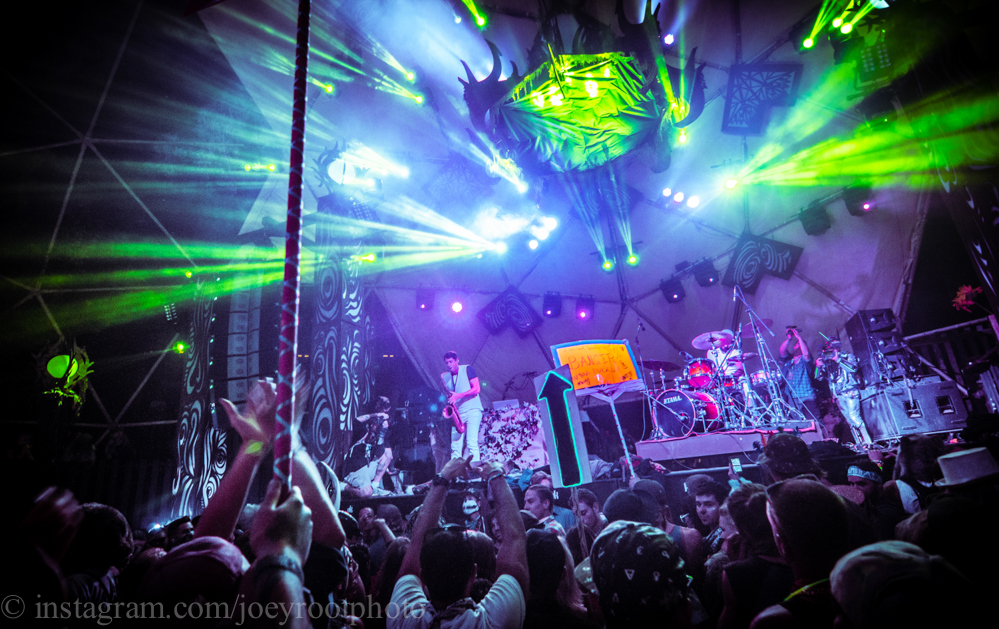 Ancient Tibetan texts describe ‘Shambhala’ as the one pure place on Earth. The legend is inherently uncertain as a place of peace, love and wisdom, but is also considered the forbidden land. It never exists in a singular time or space. Rather, it materializes in people’s collective memories as a place where mind and body achieve harmony. Shambhala reincarnates itself deep in British Columbia’s southern interior and transforms the modest Salmo River Ranch into a week-long oasis celebrating music, art, and life.

A fully self-regulating and cooperative community evolves together over the week as 10,000 strangers infiltrate and claim the pristine forest and beach real-estate to build their temporary kingdoms of tents and tapestries. Creativity and experimentalism manifests itself throughout the festival and is illustrated by the people through their imaginative costumes, signs, totems and campsite names.

This freedom is a product of the openness and comfort that organizers, staff, and volunteers work tirelessly to maintain and embody. Organizers have ensured stable and sustainable growth over 18 years of the festival and remain committed to their early ideals. While the lineup rivals any festival out there in both breadth and depth, especially for a primarily electronic festival, the size of the grounds and population have remained modest. The Shambhalove starts at the top but is spread and exemplified by the festival-goers themselves.

Shambhala bleeds progressiveness, taking a harm-reduction approach to drug-use, mental health, and personal safety. The Sanctuary provides a safe and non-judgmental space those who might be having a bad trip or those who simply need a place to rest. While most festivals are taking harder, more punitive measures against drug use, Shambhala and the AIDS Network Kootenay Outreach and Support Society (ANKORS) have a tent where people can test their drugs for safety and get a better understanding of the risk they are consciously taking. As well, there is a Women’s Safe Space for those that might feel threatened or uncomfortable. The results largely speak for themselves.

One legend of Shambhala calls it the place of silence. It was anything but: it was LOUD. The wooden walls of the Pagoda could only do their best as they rattled and shook to the non-stop party emanating from the booming bass of the stage. Here, Shambhala flexed the muscles of its reputation with a fully-fledged series of big-name artists. The Dirtybird Takeover started early on Friday and continued their innovative take on house music throughout the night. Despite some scheduling confusion which forced us to miss a personal favourite, Friend Within, Cause & Effect started off the night nicely. After exploring the rest of the stages throughout the night, we came back to catch the end of Justin Martin’s set and were firmly rooted until the sun was up again. Claude Vonstroke and Christian Martin were both great, but Dusky completely caught me off guard. I’m a big fan of the English duo for their smooth and melodic house tracks like ‘It’s Not Enough’ and ‘Careless’, but man were they heavy as they sent bone-rattling waves of bass reverberating throughout the crowd all night.

Saturday evening’s lineup featured filthy deep house from jackLNDN, Destructo, Kidnap Kid, and MK that got everybody moving. Then GRiZ came on and stole the crowd. People had no choice but to get the funk down as Detroit-native Grant Kwiecinski sprayed his sexy sax and blasted his signature ‘future-funk’ style. In such a small and communicative festival, word quickly got out that Toronto-bred fan favourite Zeds Dead were the mystery headliners which took away the surprise factor of their set. However, they did not disappoint in the slightest. Their bassy bangers and remixes of classics like Pink Floyd’s ‘The Wall’ and ‘Otherside’ by the Chilis immediately brought back the intensity that GRiZ ignited. Pagoda got tropical Sunday night with the monster trio of Bakermat, Thomas Jack, and Kygo. The tropical vibes danced themselves nicely into the Sunday headlining act: Pretty Lights. What more can be said about Derek Vincent Smith? He played an epic career-spanning set that was amplified to unimaginable levels. He dropped massive classics like ‘I Know the Truth’ and ‘Hot Like Sauce’ as well as soulful tracks from his Grammy-nominated ‘A Color Map of the Sun’ in front of an overflowing crowd of his most dedicated fans.

The Village, home to the best bass music and dubstep the world has to offer, was absolutely bonkers and had bass heads headbanging off the walls (and speakers). In a jungly and animalistic environment, heavyweights like Excision, Datsik, Downlink, Terravita, and Zomboy were relentless and unforgiving all weekend long. Despite the stratospheric popularity of Jack Ü, Skrillex took the time to give Shambhala a tailor-made classic. With roots in punk-rock, Sonny John Moore brings a contagious energy to his fast-paced and rapidly switching sets. Those patiently waiting for Big Gigantic to set up their drums and saxophone were treated to a unique interlude that featured a beatboxer who used sound effects to his advantage and rapidly hit the crowd with bursts of bass with the staccato of his voice. Big G finally came on and showed off their dynamism as they ingeniously melted their instruments together into an exciting stream of sound.

Fractal Forest proved to be an ever-changing experience as the scene ebbed and flowed as time meandered forward. This stage kept it old-school and focused on vinyl. Friday was funky and bumping all night with a strong line of sets from Vinyl Ritchie, Slynk, The Funk Hunters, Stickybuds, and Smalltown DJs. Shambhala clearly understood its target demographic and threw it back to the 90s Saturday with DJ Jazzy Jeff followed by Mix Master Mike. Mix Master Mike blew his colleague out of the water with superior song selection and technical talent. While he threw in the occasional Beastie Boys sample to please the crowd, Mix Master Mike really stood on his own. A. Skillz followed up with a technically sound and fast-paced set. Sunday afternoon was filled with the Fractal Funk Jam, hosted by Smalltown DJs and featured a variety of DJs throwing down funk, soul, and disco classics that got people vibing after three long days of dancing.

The Grove was the most unique stage in terms of stage design and musical style. It was a cozy and calming environment and did not push their speakers to the limits. It invited innovative, experimental, and abstract sounds as well as many live acts. I only spent significant time at the Grove on Sunday to listen to unique electro-acoustic sets by Moontricks and Rising Appalachia. I was really there to see the virtuoso Simon Green, better known as Bonobo. He read and fed off of his crowd of dedicated fans and reacted to the environment by giving us a masterful set that was more like a carefully curated essential mix than anything I’ve seen him play live. He slowly layered dark downtempo beats with tribal chants to create a psychedelic atmosphere before he integrated some of his most fire tracks. My favourite moment was when he blissfully mixed-in the track ‘Looped’ by the Icelandic minimalist-techno duo Kiasmos.

The Amphitheatre, one of two stages open early, may have been connected to a jet engine and relentlessly released bass into the tightly-packed pit. Skiitour got the party banging early west coast style. L.A. native and festival vet David Starfire brought the most unique approach as he contrasted heavy dubstep and breakbeats with jazz and traditional Indian and Middle Eastern samples. The Amp continued the theme of heavy-bass and trap all weekend that included bouncy and entertaining sets from Andrea, Ganz, Sabota, and CRNKN.

The Living Room was the perfect antithesis to the Amphitheatre. Nestled along the beach, this stage provided a tranquil environment which brought some of the most technically proficient DJs to the decks. Thursday featured laid-back funky vibes from turntablists Vinyl Ritchie and Dubconscious. Friday, house legend DJ Harvey graced the stage for 4 hours and played an inviting set for people to stop-by and groove to. I did not find my way back to the Living Room until Tipper’s Sunday sunset session – the perfect calm before the storm of a stacked Sunday lineup across all stages.