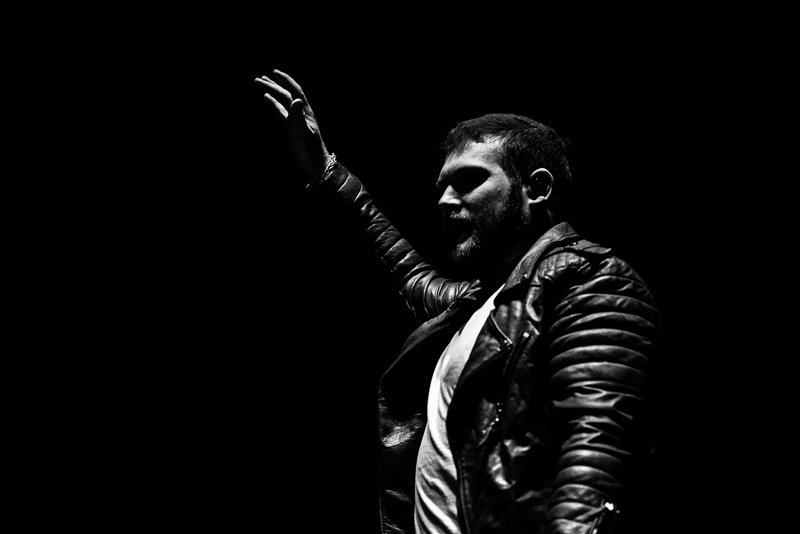 Not every day do you see arena concert tours coming through smaller markets, but nobody seemed to have told that to a sold out Shinedown crowd of 8000+ in Fayetteville, NC. Shinedown has been at the top of the arena rock game over the past several years, packing out massive venues both as a headliner and on tour with Godsmack last year. With support from Asking Alexandria and the inimitable Papa Roach, this was sure to be a spectacle of a show.

The show started promptly at 19:00 hours, a half hour earlier than expected. Asking Alexandria, led by frontman Danny Worsnop, got the crowd moving early, showcasing material off of their latest, self titled record. Cryo cannons and strobes only accentuated the performance, setting the stage for the night to come. I was somewhat disappointed by the lack of diversity in the setlist, as I’m personally more of a fan of their older material, but the band has definitely taken on a new, exciting direction. Their musical confidence blew me away, and their comfort with such large stages couldn’t be more evident. Up next, though, was a true classic: Papa Roach.

Papa Roach has a special place in my heart, and I was stoked to see them with such an elaborate stage show. They kicked things off with the always classic Last Resort, a manic Jacoby Shaddix belting every line with trademark aggression and spunk. Their light setup was among the most striking I’ve ever seen, creating a true headliner’s atmosphere. The setlist touched on all the nostalgic PR songs that made their name, from Scars and the aforementioned Last Resort to Forever and …To Be Loved. The 14-song setlist had an epic air about it, and you almost forgot they weren’t the top billing artist of the night. But, as the final note to their new track Born for Greatness faded, the buzz intensified even further in anticipation of Shinedown.

Shinedown’s set began in a fury. Vocalist Brent Smith stepped out, clad in a Fayetteville Marksmen jersey- the SPHL team who usually play this arena- with a backdrop of flame. As this is my first experience with Shinedown, I was blown away by the power and stage presence immediately. As the pyro cascaded throughout the chorus of their first song Devil, I was amazed by how such an impressive ambience could feel so natural. As they blazed through their set, Brent Smith took a moment to pause the chaos and catalyze some brotherhood amongst the audience. This camaraderie was brought in the form of a “handshake break” per se, encouraging the audience to interact with those around them. This show of unity was quite a thing to see, and it was even extended to photographers. Smith personally shook each of the photographers’ hands, mine included, which was a wickedly cool experience that took me out of the madness of the show for a minute. It made me feel so much more connected with the show- and I underestimated how much that little gesture would impact me. After that brief respite, the intensity returned full force, and maintained through their entire ninety-minute-plus set. I’ve never felt such a united crowd- and this “brotherhood” has made me personally respect and enjoy Shinedown all the more. Don’t miss your chance to experience the madness this year, either on this tour or with Badflower, Broken Hands and Dinosaur Pile Up this summer. Dates below!﻿