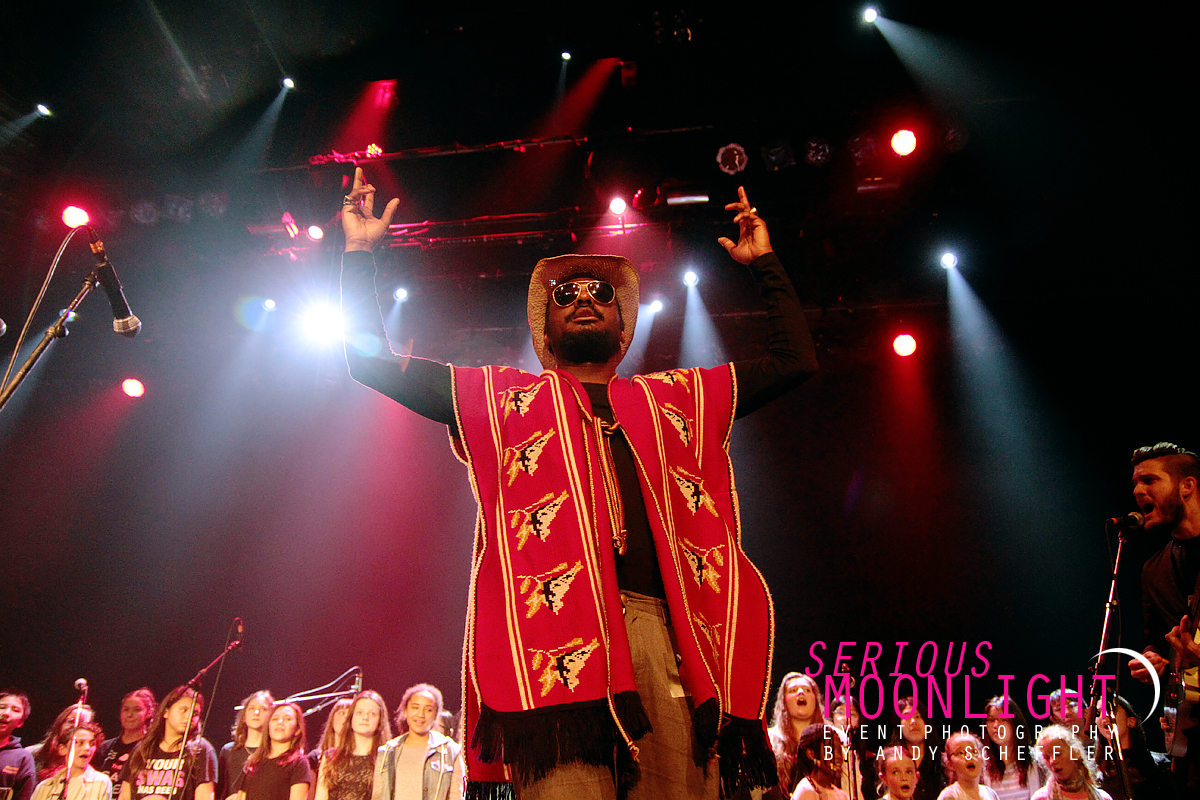 I was able to pop in and catch Night 1 of the final year of #SingItFwd, a locally-made multi-musician concert project and benefit for Saint James Music Academy, supporting music programs (and other essentials) for kids in Vancouver’s Downtown East Side. I was surprised, rolling up to the venue around a quarter to showtime, to see a line stretching halfway down the block. It was later revealed that the tickets had been misprinted with a later start time. The show began about half an hour later than the intended start time, but it’s unclear whether this was a concession to ticket holders, or just because they were still setting things up, as there was still a handful of people scurrying in the dark around the stage, stringing cords, fluorescent-taping corridors on the floor and adjusting the cameras that would provide a live stream of the show to viewers at home.

This was my first year attending one of these shows, and I wasn’t entirely sure what was to be in store. A lot of local bands, from very-indie up to major labelers, have been part of this event for the last five years. Things kicked off with a video showing some of the kids that have been with the program over that time span, talking about their time here and inducing a few giggles from the audience as they spoke of their trepidation being on The Vogue stage in front of so many people. Twin Bandit came out first, assisted by a collection of kids accompanying them on strings, for a slow, sweet set. Hosts Cory Ashworth and Tamara Stanners came out to address the crowd then, describe the night and the project, and then introduced The Zolas. They were having some panicky backline technical difficulties around the drum kit, and so did a pair of songs sans drums, which was absolutely and totally fine and entertaining. The drums bounced in at an opportune moment, and they were off and running. Between sets, the stage set-up scurrying continued as instruments were changed out and mics moved while we were distracted by more videos showing some of the rehearsals with the bands and kids.

Gay Nineties were up next, channeling our dearly-departed David Bowie, even doing a version of “The Man Who Sold The World.” Much of the room was filled with a very young crowd, the peers of the kids who were in the various performances through the night, and I’m wondering if the heavy Bowie-tribute influence through the night really landed with them. Maybe they thought this was a Nirvana cover. Michael Bernard Fitz, aka MBF, was up next and was described as, “the first person in Vancouver to have a man bun, and the first person in Vancouver to cut off his man bun.” Near the end of his brief set, a huge line-up of kids came out to line the back of the stage and sing along. Kids in the crowd went bananas yelling at their friends who were on stage. Five Alarm Funk brought the tempo back up after that with their big gestures, big faces, and big tunes. The kids came out again, this time lining up in front of the band to dance up a storm.

We were shortly plunged into darkness, the stage setup moved again, and in a deep red, the kids returned at the back of the stage and K-os came out for a tune. He managed to work in a couple lines of Bowie’s “Space Oddity” into his song, and then left the stage with a wave. We all figured he’d be back for another song later, but that was his only appearance of the night. Frazey Ford was up next, sporting an amazing wine-red velour jumpsuit. She has an incredible voice, and played a brief, sweet solo set before making way for Dear Rouge. This husband-wife team have been making some pretty big waves lately, and they have apparently gone through some hoops to be part of the event this year. It was a spirited set, and yes, there was a Bowie t-shirt and a version of “Starman” involved. The kids came back out again to come in on the waning chorus and some ‘la-las.’ It was lovely, and it looked like vocalist Danielle McTaggart was on the verge of tears at one point. Dammit, Bowie.

All night, Stanners and Ashworth had been hinting at a surprise guest, which had been correctly guessed by a few folks in the audience, and then was summarily ruined by the guest himself as he quietly walked out on stage and began tuning his guitar while the hosts were still ramping up the introduction. They looked over at him, admonished him, and then introduced, “Dan Mangan, the worst surprise ever.” He played a couple solo songs, and then was joined not only by the kids, but also by a bunch of the musicians from the rest of the evening, who for some reason all began swapping jackets. There was a running joke with a particular leather vest that may have started this off. Anyhow, everyone sang along heartily, and then there were some further thank yous, accolades, waves, a final all-in song, and we were sent off for the night.

The Zolas at #SingItFwd © Andy Scheffler

The Zolas at #SingItFwd © Andy Scheffler