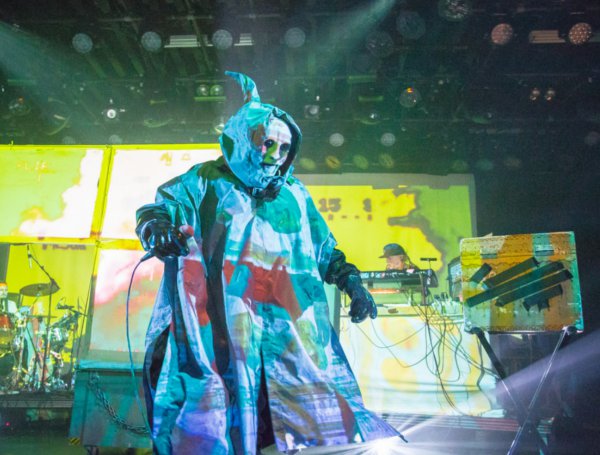 Masters of industrial music and horror based theatrics, Skinny Puppy, performed their second show of the year to an adoring crowd at the Commodore Ballroom. Continuing to support their latest work, 2013’s Weapon, Skinny Puppy’s work continues to highlight the savage elements of human nature. Beginning in the early 1980s Vancouver industrial scene, the artistic partnership of esteemed producer cEvin Key and the manic vocal/lyricist Nivek Ogre continues into its third decade. While the early work of Skinny Puppy is highly reflective of dated 80s studio techniques and often dated, nostalgic, new material from the artistic pair has surpassed expectations and sleekly bridge the gap between retro and modern. As interest in electronic music continues to swell, Skinny Puppy’s so much to audience outside the dedicated but small electro industrial scene. Retaining their fanatical fervour throughout Weapon’s militaristic rhythms and aesthetics of corruption, decay and horror.

Wearing a white, spooky, dark eyed mask, Ogre approached the centre of the stage; cEvin Key manned his mixing station on a raised platform to the right of the stage. Skinny Puppy started off their set with before preceding to the . Renowned for their bombastic barrages and extreme volumes, Skinny Puppy’s visuals are no less compelling. The stage, adorned with screens projecting live videos from digital cameras strategically positioned around Ogre, cEvin Key and live percussionist Justin Bennett. Adding to the performance were an additional two stage hands, clad in bio-hazard suits and gas masks. Layers of psychedelic projections, a bloodstained lampshade and a statue of a starving dog offered a wealth of visualization that significantly reinforce Skinny Puppy’s fascination with chaos.

Playing “VX Gas Attack” from 1988’s Vivisection, Skinny Puppy’s subject matter has grown in relevance in our modern times obsessed with concerns of terrorism, overt pollution and animal rights. Nor have Skinny Puppy shy’d away from contemporary subject matter.“Since 2011, over 400 tons of caesium 134/137 have been released into the pacific ocean. You fuckers got a full dose of Fukushima” Ogre snarled from behind his mask, as the brooding beat of “Paragun” rose to effect: “radiate, feeling baked catch the high high /make it pass the buck fuck fuck.” Next to the reserves of beloved Skinny Puppy classics from their late 80s/early 90s heyday, their newest material holds its place with signature bold, aggressive and brooding electronic base. Skinny Puppy’s stage show has progressed with equal success. At one point, Ogre, menacingly brandishing a butcher’s knife, quickly turned and simulated a knife attack on the stagehand, popping open a gushing blood pack: “I’ve been killing this girl every night on tour!” he later exclaimed while introducing the crew.

Retiring for an encore break after a vicious rendition of “Salvo”, Ogre would return to the stage without his imposing mask and costume. Stripped back in terms of visualizations, the encore was no less motivated on the part of Ogre and cEvin Key. Skinny Puppy’s gruesome aesthetics generate an ambitious and distinct environment of terror and fear that offers an escape from day to day reality seldom equalled. Thanking their crew and their home town of Vancouver for their continued support, Skinny Puppy wrapped up by blasting through their iconic track “Assimilate,” a somewhat ironic suggestion from a revolutionary musical project that has done anything but.