One of my first thoughts on this show was that it seemed a little bizarre to watch an artist like Slash perform in a theatre… a little bit. On the other hand there is indeed a bit of a legacy of rock bands and opulence, so perhaps it’s more appropriate than my reaction. I arrived right in the nick of time as the lights dropped and “warm-up act” (band’s own words!) RavenEye came out to start their set. Seated midway back and right in the middle of the theatre, I had a great view of the stage layout. Lining the back of the stage was the biggest dang banner I have ever seen, listing “Slash featuring Myles Kennedy and the Conspirators.” Bit of a mouthful for a band name, but giving credit where credit is due. Underneath was the grinning happyface/skull in Slash’s signature top hat. In front of that, a fairly simple stage. A large drum kit on a riser, currently covered in a black sheet; A ton of amps stacked all over, some lined with smalls figurines; a few lights, but even these were merely perched on a bunch of road cases rather than on anything intricate. RavenEye singer/guitarist Oli Brown has an appropriately raspy rock n roll voice with a bluesy leaning, from my vantage point looking kind of like a tiny English Chris Cornell. He has a wiry frame, and him and bassist Aaron Spiers do swap spots and travel around it but seem to not quite know what to do with themselves on such a large stage at times. That said, the two of them are plugged in, and it’s a wonder with all their stage-side-swapping that their various cables didn’t get tangled up hopelessly. Plenty of genre-standard guitar solos and some fairly lithe acrobatics later, they had sufficiently buttered up the crowd that they got a pretty healthy clapalong going (just before the sound cut out across the room for a split second). Some fellow in the crowd yelled “F*cking awesome!,” which erupted a series of woooos from the crowd and a good laugh and nod from the band. Brown bantered a little bit then, describing driving through the Rockies, and to come and join them at the merch booth following the show and to buy their records so they can pay for fuel. They were not disappointed in the crowd, having preconceptions, somewhat like myself, that a seated theatre show might be a bit on the calm and tame side. “Enjoy the bad things in life, because they are the best things,” Brown told us in his British lilt as he and the band launched into the creatively named “Hey Hey Yeah.” At a few points in the set, Spiers started to use a small synth device attached to a mic stand to add a new layer to the songs. Drummer Kev Hickman is sitting behind his kit, at times throwing his arms around so enthusiastically he looks a bit like a muppet. Late in the set, Brown perched atop the kick drum while Hickman continued to beat away, and Spiers popped over on one knee, head thrown back, at Brown’s feet to support his guitar solo. Their set had a beautifully catastrophic end, where Brown introduced his band twice, they flung their instruments off, then picked them back up again for a single bar, then acrobatically balanced their guitars up in the air before abandoning them again. The three of them gathered in the middle of the stage for a bow, and then strolled the stagefront high-fiving the super-satisfied crowd.

Shortly, the main course. There are at least three reasons why I was excited to see Slash. One, well, it’s Slash! Legendary! I’d never seen Guns N’ Roses, and was never really a big fan of them in their heyday – my music tastes were a little different back then – but I always appreciated the guitar mastery of the man, and in later years, the style grew on me more and more. Two, our hometown hero and beloved CanRocker Todd Kerns! Superbly talented and well-loved in the homeland, but little-known outside of Canada for years while in a variety of excellent bands, he jumped ship to Las Vegas a few years back and seemed to become something of an overnight sensation. Continuing his solo work and joining on with the Sin City Sinners, who play around Vegas, often with big rockstars as guests, he didn’t escape the keen eyes of Slash and co. and got snapped up to lend vocal and bass talents to that project. He is a busy guy for sure, and Vancouverites were beaming with pride to see him on a big stage in his adopted home town. I count him as an old friend, and after years of watching him on small club and festival side stages across Canada and through a variety of projects that didn’t gain much traction despite his talents, it was heartwarming to see him owning this huge stage. Third, Myles Kennedy! Formerly fronting a band called The Mayfield Four that I stumbled upon while browsing a local used record shop in 1998, his powerful, warbling voice on the album “Fallout” instantly captivated me and was one of the first CDs I ever owned. That first M4 album is well different from the sort of music produced by this project, but I had not heard anything from that band after a much heavier sophomore album in 2001, and was pretty impressed/stunned to see him emerge years later alongside Slash. I had never gotten a chance to see M4 while they were around, so this was definitely to be a treat. There was no subtlety to the start of this set. The lights tumbled off around the room, and a loud, slightly creepy (especially with that grinning skull staring us down) calliope tune began to play as bright blue lights started to spring up. I can’t stop smiling. I’m pretty sure that’s the point. The band strolled out, led by Slash, bringing the crowd to its feet all at once. Kennedy is treated as the star in a lot of ways, as the lead vocalist. He takes the centre spot on the stage and even has his own little riser behind his monitors so he can get up high and loom over the crowd. Slash is often just hanging in his corner, the only guy on stage with a physically plugged-in guitar, but he always has a white spotlight on him, even if the other guys are running around or more centrally-located on the stage. The stage techs also don’t make any effort to be discreet. You can see them just strolling back and forth around the back of the stage. The set was a hundred times louder than the openers. I had thought the opening band seemed quite subtle for a rock band and attributed it to the style of venue, but they were saving the volume knobs for the headliners for sure. The lights seem designed to blind the crowd, blasting intensely bright whites straight out. Kerns and his long legs galloped like a gazelle back and forth all over the stage, long black hair whipping about. The backlighting made drummer Brent Fitz challenging to see, but the kit was massive and those beats kept going so I’m sure he was back there somewhere. Plenty of guitar acrobatics and highfives and arms in the air ensured we all knew – this is a rock show. As can be expected, there were a lot of guitar solos. Slash would often slowly meander to the middle of the stage while the rest of the guys gave him some space to be the front man for those solos. Some of those went on a bit long for my liking, but I’m sure I’m alone in thinking that, and in fact lots of people go to see Slash just to watch him wail away on that guitar for ages. I just found myself contemplating the venues acoustic tiles at times when the wankery went on for minutes and minutes. Every song ends like they’re ending the show – just huge. A few times, various band members would leave the stage, sometimes stripping the set right down just to Kennedy’s big, bluesy voice weaving around Slash’s riffs, bouncing on top of a simple drum beat. Kennedy’s voice is sometimes completely overcome by the guitars, which I totally get, but I think it’s a shame because it really should be forefront as often as possible. When Kerns takes over singing, or especially when he and Kennedy harmonize, it is absolutely stunning. They have a similar quality to their voices, if only that Kerns’ is more rusted and rock, and Kennedy’s is more polished soul. But they both can just wail, and when they wail together, it’s a thing of beauty. Kerns got to take the centre stage as well for a couple songs, most impressively taking lead vocals on “Welcome To The Jungle.” Pretty wild! He also seems to have an endless supply of picks, which he is constantly whipping out into the audience. Slash was starting getting more active as the set rolled on too, scissoring across the stage from time to time, while the others were careful to stay away from his guitar cable. He makes his guitar playing look completely effortless, and like he’s always setting up for the perfect photo. He has had the practice! The crowd was really well-behaved. A few sweaty headbangers rocking around in danger of knocking out themselves or others nearby, and a steady crowd gathered in the small floor space up front, but not much crowd control was needed. The security force even had chairs they were sitting in up front for a while. Slash didn’t do much speaking, and his first words were to introduce Kerns (as if we didn’t know) and get the crowd hollering for the local boy. When Kennedy returned to the stage, he said, “That mother*cker can SING!” in reference to Kerns. They went straight into “Beneath The Savage Sun” then, a dark, badass sounding tune. They included Guns N’ Roses tune “Civil War” midset, which prompted people to hold lighters aloft. Actual lighters! Not just cel phone screens! I’m impressed. Slash had cracked out the doubleneck guitar, bringing in a classic G’n’R sound. Nearing the end of the main set, even Kennedy strapped on a Gibson SG and contributed to the guitar onslaught. The audience came alive for “Sweet Child Of Mine.” A world united in Slash! It was an awesome thing to be in the room for. After this, there were finally introductions made by Kennedy of the band to the crowd. Lots of love again for Kerns, who looked a bit dumbfounded by it all, and then that guy, “from somewhere way down south,” Slash himself, who then turned around and introduced Kennedy to the room. They ended the main set with “Slither,” and then pitched some more picks to the room and walked off stage to a heap of yells. 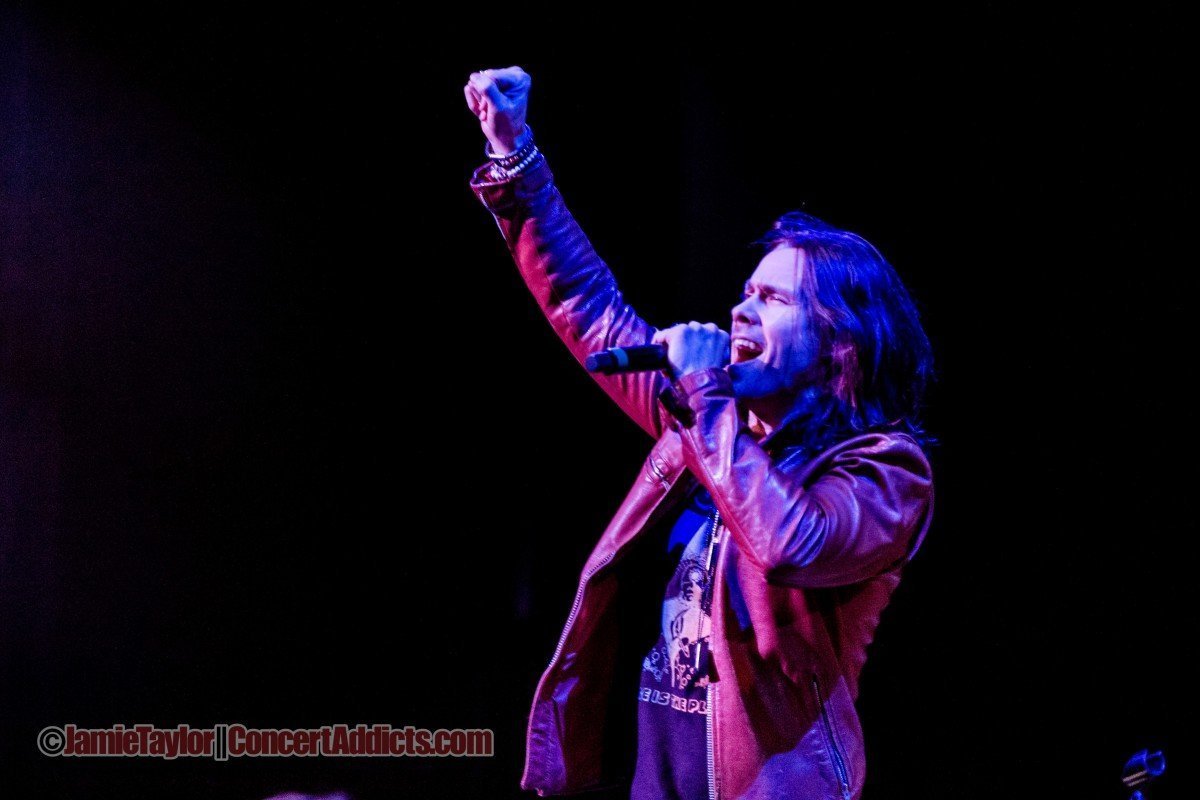 They kicked off the big encore with “Paradise City,” engaging the audience in a furious clap-along that even the security crew got into. Confetti canons, til now silent at the sides of the stage, blasted off to huge cheers. That was such a proper, massive end to a much-anticipated show. Following the music, the band spent time high-fiving people in the front rows and chucking every little bit of spare picks and sticks and things they could find all over the room. They have some good throwing arms on them, with some picks sailing nearly to the balcony. Kerns hauled a girl out of the front row for a photo op on stage, and of course the whole band lined up for a big bow and some fist pumps to end it all off. What a night – my ears may still be ringing!